Why Does Clerical Sexual Abuse Always Stay At The Clerical Level? 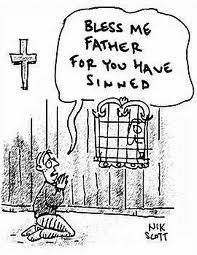 Pope Benedict's response to the sexual abuse crisis with his calls for conversion in the laity bring this sort of thing to mind. Especially since it's the laity that ultimately get to pay for the clerical abuse crisis.
The just released book on Pope Benedict, "Light of the World", contains a wealth of information concerning Benedict's views on many topics of current importance in Roman Catholicism.  For me personally three topics were of critical interest: condoms and HIV, the Legionaries of Christ, and the sexual abuse crisis. All three represent what John Carroll called the tendency towards inhumanity in Catholic doctrine and the fact sometimes this cruelty becomes sacrosanct. These three however, take the cruelty issue to another level.  They all represent the lengths the Church is willing to walk to sacrifice it's laity on the altar of clerical authority.

The following exerpt on Benedict's view of the sexual abuse crisis is taken from the translation offered by the Italian journalist Sandro Magister from his blog Chiesa Espresso.

The shock of the abuse

The facts did not take me entirely by surprise. At the congregation for the doctrine of the faith, I had worked on the American cases; I had also seen the situation escalate in Ireland. But the dimensions were still an enormous shock. Ever since my election to the see of Peter, I had repeatedly met with victims of sexual abuse. Three and a half years ago, in October of 2006, in a speech to the Irish bishops I had asked them to "establish the truth of what happened in the past, to take whatever steps are necessary to prevent it from occurring again, to ensure that the principles of justice are fully respected and, above all, to bring healing to the victims and to all those affected by these egregious crimes." To see the priesthood suddenly tarnished in this way, and with it the Catholic Church itself, was difficult to bear. At that moment, however, it was important not to look away from the fact that good exists in the Church, and not only these terrible things. (Benedict has been totally consistent in not placing a single bit of blame on the hierarchy. The longer he continues to pretend the hierarchy and the Vatican curia has no blame to share, the longer this crisis will fester.)

The media and abuseIt was evident that the action of the media was not guided solely by the pure search for the truth, but that there was also enjoyment in putting the Church in the pillory, and, if possible, in discrediting it. And nonetheless it was necessary that this be clear: as long as efforts are being made to bring the truth to light, we must be appreciative. Truth, united with love when understood correctly, is the number one value. And the media would not have been able to give those accounts if the evil had not been there in the Church itself. It is only because the evil was inside the Church that the others were able to hold it against her. (Again, Benedict fails to note a great deal of the 'hostility' in the press was the direct result of the idiotic statements of his own Vatican curia and the almost universal strategy of bishops not to cooperate with secular authorities when it came to compensation for victims or releasing files pertinent to legal proceedings. It is much cheaper to talk about spiritual healing than it is to pay for real life compensation.)
**************************************

The priesthood was not, as Benedict states, 'suddenly tarnished'.  Clerical abuse has been with the Church for millenia. It has been a topic of reformers like St John Damian since the 1100's.  What made the abuse crisis different this time around was the public exposure.  Finally, after all this time, Vatican secrecy was breached, and it's clerical machinations exposed for all to see.  It effected all levels of governance. The curtain had been pulled back on dioceses big and small, and on bishops both orthodox or progressive. The  things they all had in common were secrecy, manipulation, revictimization, and allegiance to the Vatican.

Neither individual bishops nor the Vatican had any idea how to respond to this sudden 'nakedness'.  They did not have a history of having to respond to this kind of exposure in the present.  It's hard to reinvent history when the story is being written in real time. The strategy became the strategy of emotional children caught in lies--blame someone else, especially the messengers, while attempting to maintain innocence in the face of all the damning evidence.  In Benedict's case, he pretends to be above it all, surprised and shocked at the "enormous dimensions' even though he headed the CDF for eighteen years, the very Vatican congregation which had the most to do with the systemic cover up.  Sigh........

Of these three issues, the condom issue most easily lends itself to respinning and allowing our hierarchy to pretend they still hold the truth, that Benedict has changed nothing, and that this has always been church teaching---this notion that condoms can be considered a 'lesser evil' when used to prevent the harm of HIV.  "Lesser evil' are the magic operative words as condom use itself is still always and everywhere evil.  Humanae Vitae has not been breached. Ignorant immoral selfish people can use condoms as a first step to a more moral or less evil sexual life. The Church has always taught this, just not very loud.  The problem is this completely ignores the fact the Church has loudly taught just the opposite and that ecclesial bodies like the USCCB have used their influence to gut programs like PEPFAR to prevent government programs from distributing condoms or even teaching safe sex.   Ooops......... Ignore the men behind the curtain.

Constantly we are given to understand that the sexual abuse crisis, especially as it is symbolized in the Legion, has nothing to do with the heirarchy or the clerical system and everything to do with the failure of individual priests.  So Maciel is presented as a failed individual priest, not a contrived product of the family wealth of the Mexican/Spanish clerical culture--a culture which also provided Maciel with inside access to the Vatican from day one of his priesthood. For us simple laity, the issue isn't at all about this particular clerical sub culture and it's influence in the global church, it's about Maciel the unfortunate individual aberration.

Since I think the Vatican doth protest too loud, I do believe it's that very Spanish/Mexican clerical subculture that needs looking into.  The Legion debacle perfectly illustrates the nature of the clericalism that gave the Church Maciel and then protected him. The Legion is as clear a representation of the multiple forms of clerical abuse and doctrinal cruelty as we have to date.  In my thinking the Legion represents clerical abuse on steroids. To think this form of clericalism hasn't been inculcated in it's priestly formation or can be rooted out with a few tweaks is either purposefully myopic or just plain purposeful.

I understand that in the eyes of Pope Benedict, meaningfully dealing with clerical sexual abuse at it's roots would mean dealing with how authority is exercised in the Church and ultimately the entire theology surrounding the sacramental priesthood. It would mean dealing with belief structures that have framed an entire life and world view for Benedict and priests like him. In this sense he is in the same psychological space as any abuse victim whose lives and world views were also determined by these same belief structures. In the case of abuse victims their world views about their self worth and God and Catholicism were as concretely blown apart as Benedict's were concretely set. They are at opposite ends of the consequential spectrum of predatory clerical abuse.

Like it is for victims, it would be a monumental task for priests wedded to clericalism to overcome this enculturation even if they understand it on an intellectual basis. It's not the intellectual understanding that is the big bump in the road. It's the purposeful stunting of the emotional psyche at an immature stage of neural and psychological development. Richard Sipe et al, have been making this point for decades about the priesthood. The very men who move beyond this emotional immaturity are the ones who won't play the clerical game and never get promoted. The system is organized to self perpetuate and it's enforced by those at the top who benefit from how it works. Once a man gets to the level of a bishop he is never allowed to be wrong no matter how wrong he is because the whole ball of wax rests on the unquestioned authority of the bishop as a successor to the Apostles. Neither the Apostles nor their successors make mistakes, even when those original Apostles most certainly did and their successors most certainly have and most certainly still do.

How long Oh Lord will your faithful have to put up with this nonsense and the abuse it generates? Inquiring minds want to know.
Posted by colkoch at 9:56 AM