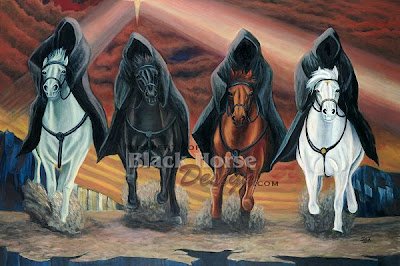 The following is an excerpt from an article by Chris Hedges on the rise of Christian fascism. It has generated as much comment for his critique of the left as it has his critique of the right. I happen to think it's a pretty good synopsis of some of the more disturbing trends in the Christian right. I also think his take on the left is legitimate and deserves discussion.

The rise of this Christian fascism, a rise we ignore at our peril, is being fueled by an ineffectual and bankrupt liberal class that has proved to be unable to roll back surging unemployment, protect us from speculators on Wall Street, or save our dispossessed working class from foreclosures, bankruptcies and misery. The liberal class has proved useless in combating the largest environmental disaster in our history, ending costly and futile imperial wars or stopping the corporate plundering of the nation. And the gutlessness of the liberal class has left it, and the values it represents, reviled and hated. (The underlying assumption here is that those who called themselves liberal and promoted liberal causes in order to get elected were actually liberal. That's not an assumption I'm prepared to accept.)
The Democrats have refused to repeal the gross violations of international and domestic law codified by the Bush administration. This means that Christian fascists who achieve power will have the “legal” tools to spy on, arrest, deny habeas corpus to, and torture or assassinate American citizens—as does the Obama administration. (It could be the Obama administration doesn't want to give up these tools. Or if they do give them up it won't be until the very end of the Obama administration.)
Those who remain in a reality-based world often dismiss these malcontents as buffoons and simpletons. They do not take seriously those, like Beck, who pander to the primitive yearnings for vengeance, new glory and moral renewal. Critics of the movement continue to employ the tools of reason, research and fact to challenge the absurdities propagated by creationists who think they will float naked into the heavens when Jesus returns to Earth. The magical thinking, the flagrant distortion in interpreting the Bible, the contradictions that abound within the movement’s belief system and the laughable pseudoscience, however, are impervious to reason. (Reason only operates when emotion is in a more or less neutral state. That's why people who may have totally differing political views can and do dialogue in non threatening settings like bars or around office water coolers. This won't happen in the middle of Tea Party rally and that is exactly why orators focus on arguments which appeal to emotional centers.)
We cannot convince those in the movement to wake up. It is we who are asleep. (Or in denial.)
Those who embrace this movement see life as an epic battle against forces of evil and Satanism. The world is black and white. They need to feel, even if they are not, that they are victims surrounded by dark and sinister groups bent on their destruction. They need to believe they know the will of God and can fulfill it, especially through violence. They need to sanctify their rage, a rage that lies at the core of the ideology. (It doesn't help that this ideology of fear is what many of us who call ourselves Christian or Catholic were raised in, and is why fear works for the left as well as the right.)

I actually disagree with the last statement. It doesn't seem to me that the dominionist right has any need to sanctify their rage because the process it's based on and the theology it espouses assumes it's inherent sanctity. The need is to force culture to conform, not necessarily to the current expression of the ideology, but to enslavement in the paradigm of fear and control. Religious expression of this paradigm has historically been the most potent cultural institution through which to insure the propagation of the fear paradigm. I don't find it the least bit surprising that the theology of Christianity began to change enormously after it had been assimilated by the Roman governing structure. It became less a philosophy of living life in relationship and more a theology of our sin and it's sole redemptive power to counter that sin.
That's really not any different than what Glen Beck espouses when he maintains his politics offer the sole redemptive power for the sins of the rest of us and our immoral culture. Pope Benedict is continuing the same line in a faith/theological sense. Hitchens offers atheism as the redemptive solution to the irrational emotional fear of the theists. Current psychology/psychiatry is attempting to transcend the boundaries of specific cultural factors by discovering the neurophysiological mechanisms, and then targeting those mechanisms with redemptive drugs.
Fear it seems is a good thing for the prevailing power structures if it can be used, channeled, and controlled. But a very bad thing if it can't be. And a very bad thing indeed, if it's choked down too much, or stoked up too much, and it explodes. A certain oil well comes to mind here.
Redemption is not about controlling fear or denying fear, it's about personally transcending fear. There are many legitimate ways to accomplish transcending one's personal fears. All of those ways all tend to start with the same realization. I am not alone in my fear. I may not have the same exact trigger for my fear my neighbor does, but we both share fear, and it sucks.
If we could just start there, admitting we all share fear, we might realize that sometimes we share the same fears. Once a burden is shared it becomes lighter. It becomes more manageable. It's not just easier to see a common solution, or hear someones wisdom, it's easier to imagine a brighter day. The truth is fear magnifies differences, needs to silence opposition, and kills imagination. Not too mention it's presence precludes our ability to manufacture any neural peptides which emotionally express it's opposite. That would be the many variations of love.
Any Christian theology which exploits fear is not participating in the redemptive action of Christ. It's essentially a religious enterprise designed to support the existing cultural status quo and it's power structures because it has chosen to survive not on the message of love of the Founder, but on the 'traditional' methods of power.
In order to insure it's own cultural survival the existing power structure will co opt any philosophy for it's own ends. I wrote a long time ago that if the Obama administration proved to be nothing more than the same thing in different stripes it would only fuel more division. That has come to pass. Partly because Obama brought it on with his own rhetoric and partly because other people decided to ramp up the fear factors swirling around Obama for their own gain. Can anyone say Saran Palin?
If progressives have made mistakes it's because of a kind of blind hope that anything was better than Bush and a belief that changing the rhetoric was enough to change the strategy of the power brokers behind the reality. It's not. Progressives need to follow through on changing the rules as well as the rhetoric and to elect public officials who intend to walk the talk.
The real players know it's not what a person says which counts. It's what a person can be paid to do. In this paradigm fear is much more useful than integrity or love. That's what has to to change. Honesty, integrity, and love are not solely the property of one side and neither is acting irrationally from fear. Maybe if we can at least admit that we can begin to find some real solutions for our collective problems.
Posted by colkoch at 9:30 AM