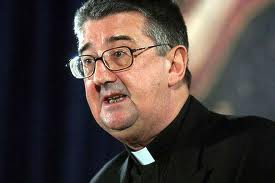 Archbishop Diarmuid Martin of Dublin is learning the Vatican does not share his worldview when it comes to bishop accountability.
Does this story which came to light two days ago have anything to do with this story?  I suspect it might.
The first link announces that plaintiffs in a law suit against the Vatican had decided to drop their law suit.  The following excerpt explains what the basis of their law suit was:

"Unlike other suits against the Vatican, which typically charge Rome with direct responsibility for priestly misconduct, the O’Bryan case focused instead on Rome’s relationship with local bishops. It asserted that the bishops are “employees” or “agents” of the Vatican, and hence the Vatican is liable for their negligent supervision of abuser priests.

A couple of days later, the Vatican announces in a paragraph at the end of letter from Archbishop Diarmuid Martin of Dublin to the priests of the Archdiocese that the resignations of two bishops who were implicated in the Dublin abuse investigation were not accepted by the Vatican:

In a letter sent this week to priests and other Dublin church officials, Dr Martin said: “Following the presentation of their resignations to Pope Benedict, it has been decided that Bishop Eamonn Walsh and Bishop Raymond Field will remain as auxiliary bishops.”

A spokesman for the Catholic Church in Ireland confirmed last night that both bishops would remain as auxiliary bishops with new duties.
“This means that they will be available to administer confirmation in any part of the (Dublin) diocese in the coming year,” he added.

Needless to say this has caused an uproar in Ireland and not just amongst survivors of clerical abuse and their supporters.  It's also caused speculation that Archbishop Martin himself is being reigned in as in this opinion piece from today's Irish Independent:

In May, the sense that more goes on than meets the eye intensified when Dr Martin told the Knights of St Columbanus, in an address, that "strong forces" in the Catholic Church wanted the truth about clerical sex abuse scandals to remain hidden. The Archbishop of Dublin confided then that he had never felt so disheartened and dejected since assuming the post six years ago. It is unlikely that he has had reason to cheer up in the past day or two.

I've written in the past that the Vatican treatment of Archbishop Martin would tell more about how seriously the Vatican was willing to take reform of the hierarchy than any uttering from Pope Benedict.  We have our answer.  The Vatican walk is the opposite of the Vatican talk.  Of course they won't walk this walk if nasty little law suits implicating the Vatican are still in force.  Or maybe the timing of these two stories is just a coincidence.

There are now hints that Benedict will meet with another group of survivors when he goes to Britain in September.  So hints Archbishop Nichols.  The question is exactly what difference do these meetings make, other than to appease the guilty consciences of the true believers.  As far as accountability in the hierarchy, the answer is none.  The show will go on the way it's always gone on, that is unless a bishop is caught red handed in actual abuse and his activity is exposed in the media.  As far as the collusion and cover up, that activity still has the green light as there has been no statement from any conference of bishops or the Vatican itself that holds bishops accountable for this behavior.  That precedent was set by the USCCB at it's Dallas convention in 2002.  Anyone who still truly believes this Vatican is capable of real reform is delusional.  I feel badly for Archbishop Martin.  Reality sucks.


Speaking of reality, here's an update about another conservative Catholic cult formed around a very sick Spanish cleric that was allowed to foster unchecked by the clerical overseers in the Vatican.  Miles Jesu superiors.  I have written about Miles Jesu previously.  I think it's safe to say the way Miles Jesu has been dealt with has been a test run for the Legion.  It should come as no surprise that Bishop Olmstead of Phoenix and Cardinal George of Chicago were absolutely no help for the victims of this group.  In fact it was just the opposite.  Shock and awe.

The big question now for the survivors of Miles Jesu is whether or not the Vatican's concern will be extended to past members abused by this group, or whether it will only be extended to current members.  My advice is don't fire your lawyers just yet.  Lawyers seem to be the only People of God for which the hierarchy has ears to hear.
Posted by colkoch at 11:19 AM