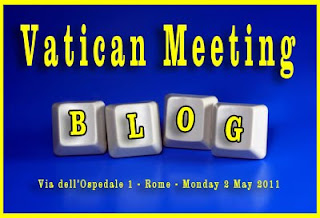 Right after the Beatification of JPII, Rome is holding a conference for Catholic bloggers.  The hope is that many will be in town for the Beatification of JPII and can stay over a day or two to interact with Vatican officials.  One of the lucky 150 to be formally invited is Philomena Ewing, author of Blue Eyed Ennis.  Her blog is linked on the sidebar of this blog.  It's fun to think someone whose work I admire and appreciate will actually be in attendance.  I look forward to reading her posts about her experience, but until that happens, there is the following from Fr. James Martin of America's bloggers:

The Vatican is hosting a blog conference.  Sponsored by the Pontifical Council for Culture and Social Communications, the invitation-only meeting, scheduled for May 2, will “allow for a dialogue between bloggers and Church representatives, to listen to the experiences of those who are actively involved in this arena, and to achieve a greater understanding of the needs of that community,” said the council in a statement.

Not a moment too soon.  The Catholic blogosphere is an immensely powerful tool for evangelization. The best blogs point Catholics to news items that might be otherwise overlooked, to resources that might be underappreciated and to personal stories from Catholic individuals that can inspire, challenge and provoke.  At its worst, though, the Catholic blogosphere is an arena for a self-appointed magisterium to engage in snarky commentary, judge without evidence and condemn with nary a thought for a person’s reputation.  One wonders when reading these condemnations: I seem to have missed the conclave that elected you as pope.  Or: When were you appointed to the CDF?  Some Catholic blogs are also so vituperative that they barely seem Christian, and hardly present a good public face for the church.  Who would want to join such a group?  What’s more, a few bloggers seem solely interested in “inside-baseball” Catholicism (I'm guilty of this myself sometimes), which the Pontifical Council has noted. “One of the things we are a little bit aware of is that sometimes the Catholic blogosphere can become a bit of a ghetto…rather than engaging in the world outside,” said Richard Rouse, an official from the Pontifical Council.

So two good goals for Catholics bloggers (and for us here at "In All Things" of course!): Engage the world outside, be charitable to the world inside.  Actually vice versa is pretty good advice as well.

Now for the take of another of America's bloggers, Austen Ivereigh, who will undoubtedly be in attendance at said conference.  This is taken from a comment he wrote to Fr Jim's article, and this link will take you to his own blog thoughts on the topic.

For an vivid example of what Fr Jim means, see the comments under a sensible piece by William Oddie at the Catholic Herald in the UK:

A furious gathering of pharisees and Torquemadas, each rushing to be purer than the other. Oddie quite rightly asks them, as Fr Jim does: who appointed you to the CDF? (Ivereigh is not exaggerating.  The comments after Odie's article are classic 'we eat our dead' conservative Catholicism.)

What's missing is an obvious ecclesiological point. The principal purpose of the Magisterium is to resolve disputes and debates over purity and orthodoxy, precisely in order that Catholics can move together as a single body and evangelise the outside world.

When people label each other "dissenters" they are arrogating that role to themselves. It is perfectly reasonable to challenge people to consider whether they are putting across views which reflect settled church teaching - but not to excoriate them as dissenters. Only the Magisterium (mostly exercised through the ordinary jurisdiction of bishops) can and should do this.

One interesting irony of the rise of the Jansenism in the blogosphere is the way that the Vatican is now seeking to claim back the role that some have tried to wrest from them.

And speaking of Jansenists, it's good to recall the words a bishop used of them in eighteenth-cenyury France: "pure as angels, proud as devils".

Let's hope that in Rome the bloggers - who include many intelligent, thoughtful people who care about the Church - agree some rules for civility, charity, and  (why not?) Christianity.

I'm sort of surprised the Vatican is branching out into the wild and whooly world of blogging, but maybe Austen Ivereigh has it correct, and the Vatican is beginning to understand it's the world of conservative Catholic blogging that is defining Catholic teaching and presenting the most visible face of the Church.  And it's not always a pretty face.  In fact, it can be a down right ugly face, and too much of the time the 'true teachings' are not.  Infallibility does not cover every act and thought mankind has conceived of or ever will conceive.  Telling us it does, to end conversations one is losing, is not the best use of blogging capabilities.


I have learned a lot about the Church, it's history, legal system, and traditions that were never covered in any of my theology classes.  The best blogs can do that for people.  Catholicism is a huge topic, and huge topics are what keep bloggers blogging.  It's kept me going for almost four years, and probably will for a whole lot more.  At their best, good blogs build interactive communities.  They allow for quiet lurkers or more interaction, which makes blogs different from reading a book or participating in a class.  Some blogs I read religiously and rarely comment, while others I comment on all the time, but I appreciate them all equally.


Some of the commenting about this upcoming conference speculates that the Vatican will send the message that real Catholic blogs will teach the real Vatican approved Catholic message, but they will ask that it be done in a less righteous and condemning manner.  Good luck with that.

I think part of the problem with blogging in general is that writers have their own voices and blogging is not a method of writing that tends to foster self censoring or much in the way of grammatical editing.  This is especially true for commenting where too often emotion leads and rational thinking gets left in the dust.  For many bloggers the voice we hear in our heads is not the way it comes out in print. Same thing with humor.  It's really difficult to pull humor off with out it sounding cynical or snarky.  I tend to be very aware of all of that now if only because I've made some spectacular mistakes.  This is not to say I always get it right, but I am much much better. Now when I come across as snarky, it's usually because I intend to come across as snarky.

There actually is a craft to blogging but it's one that is still in it's developmental stage.  I'd like to be going to Rome just to hang out with some other bloggers and get their perspectives on the craft part of this blogging thing rather than the theological part.  I think if more bloggers got the craft part down there would be a much better over all feel to the whole enterprise.  In the meantime the process continues to develop and Phil gets to go to Rome.  My prayers go with her and it's great to know at least one more progressive blogger will get to rub shoulders with the American Papist's and Anchoress's of the Catholic blogging world.