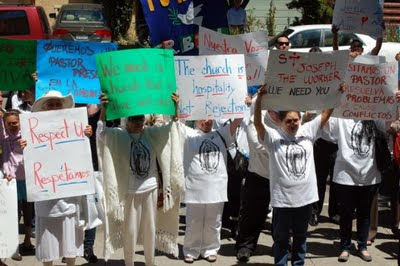 Yesterday the National Catholic Reporter had a story about a parish in California which has had enough of the pastoral actions of their current parish priest.  Saint Joseph the Worker Church is in the Diocese of Oakland under Bishop Salvatore Cordileone.  Cordileone is in the USCCB's very right wing,  Raymond Burke having been one of his co consecrators.  He followed Archbishop Vigneron after Vigneron's appointment to the Archdiocese of Detroit.  Readers are probably more familiar with Cordileone as one of the driving forces behind the Catholic involvement in California's prop 8.  Cordileone once proposed to the USCCB that contraceptive use be raised to the level of actions constituting grave matter.  His proposal was defeated, leaving contraception objectively immoral.  He's definitely in the Burkian wing of the USCCB.

St Joseph the Worker Church has never been in the Burkian wing of the Catholic Church and neither is their current pastor:  Here's an excerpt from the NCR article:

During his homily, Cordileone spoke about the call to “live in communion and harmony,” referring to the day’s Second Reading, but he did not make any specific reference to the growing conflict within the parish.
Nor did he come outside after Mass to address the assembled group. In fact, when some of the demonstrators entered the church after the Spanish-language liturgy to speak with him as he greeted other parishioners, the police were called. (That's not too pastoral.)

At issue are a number of actions taken by Direen since he became pastor two years ago. These include disbanding the parish and finance councils, limiting participation of El Consejo Latino (the Spanish-speaking advisory council), removing the social justice committee from a list of parish ministries, turning the parish’s primary meeting space into a religious gifts store, and asking a respected resident priest to move.

The breaking point came three weeks ago when he told the pastor emeritus, Fr. George Crespin, to leave the parish by the end of the month. Crespin has lived at the parish for 30 years, first while serving as diocesan chancellor and later as pastor. He retired in 2005, but continued to minister to the parish’s large Latino population. (Shades of AB Vigneron throwing Bishop Gumbleton out of St. Leo's in Detroit.)


Unhappy parishioners insist that Crespin’s eviction is just the latest example of the pastor’s arbitrary decision-making. In meetings held at a community center blocks from the parish church, parishioners said they want a pastor who respects them, involves them in discerning the direction of parish life, and has an open style of communication. (Treats them like adults in other words.)

“We want a good pastor,” said Vivian Zelaya. “We don’t want to lose our church.”
Some English-speaking parishioners, including several parish lay leaders, have left the parish in the last 18 months because of their unhappiness with the pastor and there is fear that many Hispanic parishioners will also migrate to neighboring parishes.

St. Joseph the Worker Parish has a long history of civic involvement. It provided a safe haven for Cesar Chavez, founder of the United Farm Workers, when he was receiving death threats, and was a sanctuary church for Central American refugees.

It doesn't seem to me that calling the police on one's parishioners demonstrates a working relationship, but then I've been heavily trained in the art of de escalating situations and resorting to the police is usually considered failure to de escalate. This does not seem to be a good situation at all, but from anecdotal stories from around the US, it's not novel.  Priests are taking back 'their' parishes, and they are not being subtle about it.  St Joseph's is novel only because a significant portion of the laity are upset enough to act, but even that took the forced removal of their previous priest, a man who had been in place for thirty some years.

Thirty years is a long time.  I can see where that might be just a tad bit intimidating for the man slated to replace him.  But pretty much destroying that man's previous efforts is not how one replaces an icon.  It's how one wages war.  This particular parish has a history of fighting such battles, taking on city and federal government, immigration enforcers, and big farming.  I will follow this story with interest because now St Joseph's is following it's historic call for social justice by taking on Church authorities.  So far the Church hasn't responded any better than the government did with Caesar Chavez.

Cordileone might want to rethink his options before his purposeful silence precipitates more action.  Parishes are communities first and property second.  When push comes to shove, people will defend their community because it's the community that really gives them their identity, not the property.  St Joseph's has an identity and a history for which they can be justifiably proud. I suspect it's an identity and history which won't be overcome by crozier rattling and longer Adoration hours--or the presence of police.
Posted by colkoch at 7:28 AM