Censoring The Internet Is Coming Up For A Congressional Vote 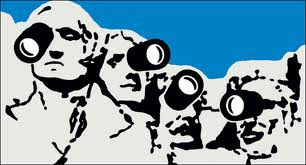 This is just me engaging in a public service announcement.  I just received the following email from moveon.org and thought I'd pass it on.  The Big Brother wants to censor the Internet. How shocking, but I imagine it's tough to get all that Double Speak through if you can't shut up all the big and little bloggers who just don't buy the Double Speak.  I can just imagine the USCCB going after all us little fish who use the term Catholic in our blog sites and who don't happen to buy their double speak either.


As soon as this week, Congress will start debating whether to give the government the power to turn off parts of the Internet. If that sounds like a terrible recipe for abuse of power, that's because it is.
If enacted, a new law would make it so a simple allegation of copyright infringement—with no review process—could lead to the shutdown of sites from YouTube to Wikipedia to MoveOn.org.1 Any website, foreign or U.S.-based, could be wiped out on suspicion and made unavailable to everyone in the world.
For example, if you (or Justin Bieber) wanted to post a video to YouTube of yourself singing a Beatles song, a record company could force the Department of Justice to shut down YouTube. Really.2
But as you may have guessed, Congress didn't come up with this tragically terrible idea on their own. Lobbyists representing Comcast, Pfizer, record and movie companies, and the U.S. Chamber of Commerce3 have been pushing Democrats and Republicans to pass bills to allow this new kind of Internet censorship. And they're close to getting their way.
But a small number of Democrats are standing strong and saying "No" to these powerful special interest groups. They need our help.
Senator Ron Wyden from Oregon is one of our champions. He has promised to start a historic filibuster of the Internet Censorship Act where he'll read the names of every person that signs a petition against Internet censorship.4 It's the perfect opportunity for 5 million Internet-connected progressives to visibly add their voice to a Senate debate. The more of us that sign, the stronger this effort to block this terrible law will be.
Click here to add your name and say NO to Internet Censorship.
We know that the Internet's openness, freedom, and lack of censorship are what make it a bastion of infinite possibility, continued innovation, and job creation. Innovative companies like Google, Facebook, Twitter, Mozilla, and Yahoo have spoken out against this law, saying:

We should not jeopardize a foundational structure that has worked for content owners and Internet companies alike and provides certainty to innovators with new ideas for how people create, find, discuss, and share information lawfully online.5

Internet venture capitalists say that the legislation is "ripe for abuse,"6 and leading law professors reject it because it will "allow the government to block Internet access to websites."7
We condemn censorship overseas when it happens in China or Iran. But today, we need to stand up for freedom of speech on the Internet here at home.
Posted by colkoch at 11:37 AM