On Pentecost Sunday The Holy Spirit Was Most Definitely In Vienna. I'm Not Sure About Rome

The following is an excerpt from a longer article and is taken from the official website of the Dalai Lama.  I have an idea of sorts of where religion and spirituality are headed in the twenty first century and these two men figure prominently.  It is utterly uplifting to me that while the Vatican is imploding, the Holy Spirit was alive and well at the Pentecost Mass in St Stephen's Cathedral.

Vienna, Austria, 27 May 2012 - On the concluding day of His Holiness's visit to Austria, he met Mr Sebastian Kurz, Secretary of State (Deputy Minister) for the Interior and had a cordial conversation with him. Shortly afterwards, Cardinal Schönborn came to meet him again and His Holiness immediately expressed a wish to visit St Stephen's Cathedral. He explained that since 1975, as part of his commitment to work to promote religious harmony, he has adopted a practice of making a pilgrimage to the places of worship of other faiths whenever he can. He told the Cardinal how on several occasions in the course of silent prayer in Lourdes and Fatima, for example, and when visiting Christian monasteries, he has been very moved by the thought of the thousands of millions of individuals who have found immense benefit in the teachings of Jesus Christ.
The two spiritual leaders discussed various aspects of monastic life, such as the great silence according to which Christian monks either keep total silence or speak only for a brief stipulated period once a day. They then went together to meet the press.


His Holiness explained again to the press that one of his lifelong commitments is the promotion of inter-religious harmony. He spoke of how, soon after coming to India he had been impressed by the religious tolerance and harmony he found there, how many of the world's major religions, as well as many that originated in India, live together side by side. He expressed his bewilderment that Catholics and Protestants in places like Northern Ireland, and Shia and Sunni Moslems elsewhere, people who follow the same God and the same teacher, could quarrel so bitterly with one another. Since all religions, despite their philosophical differences, convey similar messages of love and compassion it is contradictory for there to be conflict between them. (Precisely why I have such high regard for Cardinal Schonborn. He no longer acts as if he is trapped in the rules.  He acts as if he is fully seeking to live the Spirit.)

The venerable Cardinal publicly addressed His Holiness, “It is a great joy for us in Austria to receive your visit. You have shown great love for our country and I hope we have also shown our great love for you. You have spoken of your conviction that we must work to foster inter-religious harmony. I am a Dominican monk, just as you are a monk, and I believe we both find common human ground in religious life. The conflict you speak of relates to our need for a change of heart. I believe the religious call is to everyone's need to change their heart of stone to a heart of flesh and love.” 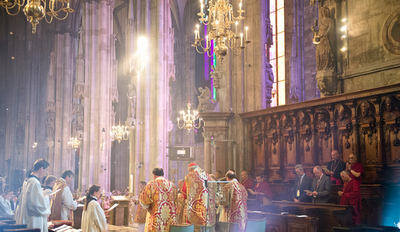 His Holiness and the Cardinal answered several questions from the press relating to the current lost generation in Europe and the indications and meanings of faith before leaving for the short drive to the Cathedral. They arrived to find pews filled with people awaiting the start of the Mass on this Sunday of Pentecost. The Cardinal briskly escorted His Holiness around the Cathedral, explaining the history and significance of various chapels and images on the way. He invited His Holiness to attend the Mass, which he readily accepted and was escorted to a seat in the choir.

In his opening words to the congregation, the Cardinal explained that he was pleased to announce the presence among them of a special guest, His Holiness the Dalai Lama, a man he described as having deep respect for people of every faith. The Cathedral was then filled with the sublime music of Schubert's Missa Solemnis sung and played by choir and orchestra. As he left the Cathedral, beaming with joy, His Holiness's words were, “Wonderful, wonderful.”

When I came across this story this morning, my heart skipped a beat.  I have for years meditated on the paths of these two spiritual leaders and how the spirituality at the heart of Catholicism would be so well served if these two came together.  And they have, and on Pentecost no less, and they shared the same spiritual energy of Catholicism's greatest spiritual treasure--the Mass.  This is the future if there is to be any hope for Catholicism as a leading voice for spirituality in the secular world.

Pope Benedict would do well to contemplate on the path taken by the Dalai Lama.  The other 'His Holiness' retired from leading the Tibetan government, getting out of politics altogether.  In the Dalai Lama's case this broke a 400 year tradition of being both the political and spiritual head of Tibet.  He handed those responsibilities over to qualified lay men and Tibet will eventually become a secular democracy right along with it's Chinese occupiers.  The Dalai Lama now concentrates on spreading the spiritual message of compassion and love as the two attributes which can foster peace and human dignity in the world.  Imagine if Pope Benedict took the same path, and turned the political and temporal aspects of Catholicism over to qualified Catholics of both the lay and clerical kind.  He would take Catholicism back to how it originally divided these responsibilities.  With the Vatican now crashing down around him, there couldn't be a better time.  He could then concentrate on grooming a successor, and I can't think of better successor for the future of the Church in the modern world, than Cardinal Schonborn.
Posted by colkoch at 11:24 AM