I'm Not Iventifacting. The Clerical Abuse Crisis Is Exploding in Australia 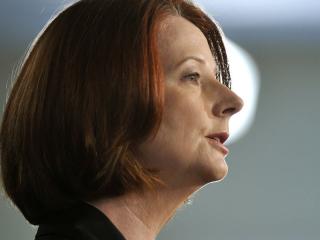 I have to think that some people may think Jerry Slevin is crazy with his posts about clerical sexual abuse and a national response to the lies of our bishops.  He is not crazy.  It's happening in Australia as I posted right before this post.  The pressure is mounting amongst Australian Catholic politicians, and it will mount here in the US.  As long as Bishop Finn stays in his position the pressure will mount. Do you get this USCCB?

PRESSURE is mounting on Julia Gillard to launch a Royal Commission into child sex abuse within the Catholic Church following public demands from key independents, and the Greens.
The calls, from Greens leader Christine Milne, Independents Tony Windsor, Nick Xenophon and Craig Thompson, come amid calls from the Prime Minister's own backbench to support a Royal Commission.
There are already state based commissions into sex abuse within the clergy currently underway in New South Wales and Victoria.
A Royal Commission would give investigators national and expansive powers to expose any alleged cover ups.

A victims group will today present to the Victorian government inquiry a list of 18 convicted pedophile priests who were moved from parish to parish or further away, where they continued offending.
The 18 include some of the most notorious pedophiles, such as Gerald Ridsdale, Edward Dowlan, Michael Glennon and the socialite priest Vincent Kiss, as well as many who barely caught public attention.
Mr Windsor said he would write to the prime minister, expressing his concerns about the "enormous number" of people affected by the allegations of abuse. (None of these men include the St John of God's Brothers mentioned in the previous post.)

"They feel as though the system is letting them down," he told ABC radio.
"My advice to the prime minister and others ... is it is probably better to deal with this sooner rather than later."
Mr Windsor said the allegations had created an odour over the Catholic Church.
The odour is the truth.  The Catholic Church surely does have an odor from the priestly caste.)

He is concerned about recent allegations, especially from a senior NSW police detective, about a cover-up inside the church.
The MP dismissed as "pathetic'' a decision by NSW Premier Barry O'Farrell to limit a special commission of inquiry to examine the police investigations of paedophile priests in the Hunter Valley.
"It almost makes a mockery of the people who have suffered," he said.

Any inquiry into the allegations needed to be national, Mr Windsor said.
"Blind Freddy can see that."
Federal cabinet minister Craig Emerson said Ms Gillard had yet to discuss the issue with her colleagues.
"She wants to review the work that is going on already and also review the evidence and the issue more generally," Dr Emerson told ABC radio.

Opposition frontbencher David Johnston said the revelations of child abuse were damaging the reputation of the Catholic Church.
"This has been an absolute blot on the landscape in terms of people's faith and trust in the church," Senator Johnston said.
But he was circumspect about the merits of a national royal commission.
"Remember, royal commissions are very expensive and people have to be cross-examined in giving their evidence," he said.
"The victims are often the last consideration in this, and I am concerned we put them through a court process that aggravates the situation."(Let's be honest, the Church is the first consideration in this because there are victims ready to testify.)

Australian Greens leader Christine Milne said the coercive powers of a royal commission would look at the systemic failure of the church.
"And that is what people want," she told ABC radio.
"There is no doubt that cover-up occurred and the key thing was to protect the church at all costs rather than have the embarrassment and the humiliation of this coming out." (Absolutely true, which by actual behavior makes the Church more important than the teachings of Jesus.  Gosh, I wish some fundamentalist could point out in the Gospels where Jesus said the Church was more important than His followers.)

Senator Milne said she would discuss the matter with Ms Gillard when parliament resumes later in November.
Ms Gillard is expected to comment on the possibility of a Royal Commission later today.


Update:  Prime Minister Julia Gillard has indeed announced a national royal commission into child sex abuse which will cover religious institutions, state institutions and NGO's serving Australia's children.  Cardinal Pell welcomed the announcement:
"Public opinion remains unconvinced that the Catholic Church has dealt adequately with sexual abuse," he said in a statement.
"Ongoing and at times one-sided media coverage has deepened this uncertainty.
"This is one of the reasons for my support for this royal commission.
"I welcome the Prime Minister’s announcement. I believe the air should be cleared and the truth uncovered."

Here's a link to Catholica Australia which has mover coverage and comments:http://www.catholica.com.au/forum/index.php?mode=thread&id=116932#p116932
Posted by colkoch at 7:18 PM