A Red Flag Over The New Pope 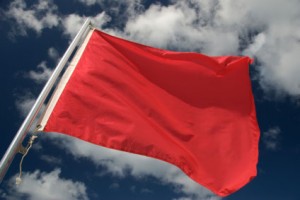 While there are many things about Pope Francis I find laudatory, there are also some things which throw up some serious red flags.  I happen to believe one of those red flags will color too many of his decisions.  That flag is illustrated in a homily he gave this morning.  The following excerpt is taken from Vatican radio's translation of his homily.  The link is at the bottom of this excerpt.

“You may ask the question,” continued Pope Francis, ‘Father, what is the weapon to defend against these seductions, from these blandishments, these enticements that the prince of this world offers?’. The weapon is the same weapon of Jesus, the Word of God - not dialogue - but always the Word of God, and then humility and meekness. We think of Jesus, when they give that slap: what humility! What meekness! He could have insulted him, no? One question, meek and humble. We think of Jesus in His Passion. His Prophet says: ‘As a sheep going to the slaughter.’ He does not cry out, not at all: humility. Humility and meekness. These are the weapons that the prince and spirit of this world does not tolerate, for his proposals are proposals for worldly power, proposals of vanity, proposals for ill-gotten riches.”

“Today,” continued Pope Francis, “Jesus reminds us of this hatred that the world has against us, against the followers of Jesus.” The world hates us, he repeated, “because He has saved us, redeemed us.” Recalling the “weapons to defend ourselves” he added that we must remain sheep, “because sheep are meek and humble, [and when we are sheep] we have a shepherd.” The Pope concluded with an invocation to the Virgin Mary, asking her, “to help us become meek and humble in the way of Jesus.”

Text from page http://en.radiovaticana.va/news/2013/05/04/pope_francis_at_mass:_fighting_evil_with_meekness_and_humility_/en1-689083
of the Vatican Radio website

*****************************************
I have a difficult time believing Jesus came to teach us how to weaponize the spiritual attributes of humility and meekness.  I don't think Jesus came to teach spiritual principles as battle strategies or to use as weapons in military campaigns of any sort.  Spiritual or secular.  Jesus came to teach love and compassion as the two attributes which enact the will of the Father on earth exactly as they do in heaven.  There is nothing in the Lord's prayer about wars and weapons.  There are lines about forgiveness and forgiving, and about being delivered from evil.  There are no lines about conquering evil in the name of Jesus or remaining sheep under the protection of some shepherd as military protector.
Pope Francis has consistently used this kind of military weaponizing language when speaking about Jesus and Catholic spirituality.  I find this trend of Francis' irritating if only because the first thing humanity usually does with a new technology or scientific discovery is weaponize it.  I would sincerely hope spirituality could be evolved in such a way that it precludes weaponization of it in any way shape or form.  Actually, I'm beginning to believe it is precisely this use of spirituality as a weapon in a some inner dimensional war that is precluding Catholicism from leading it's followers in engaging in the spiritual acts that Jesus did.  The aim of any spiritual system should not be to further the kind of dualistic split inherent in an 'us against the enemy' mentality, but to transcend such dualisms by seeking a more holistic and encompassing point of view.  The idea is to heal such divisions, not conquer them.
As long as Francis preaches the war and weapons form of spirituality, rather than reducing the dualism in Catholicism, he will increase it. That for me, is a very big red flag.
Posted by colkoch at 12:01 PM