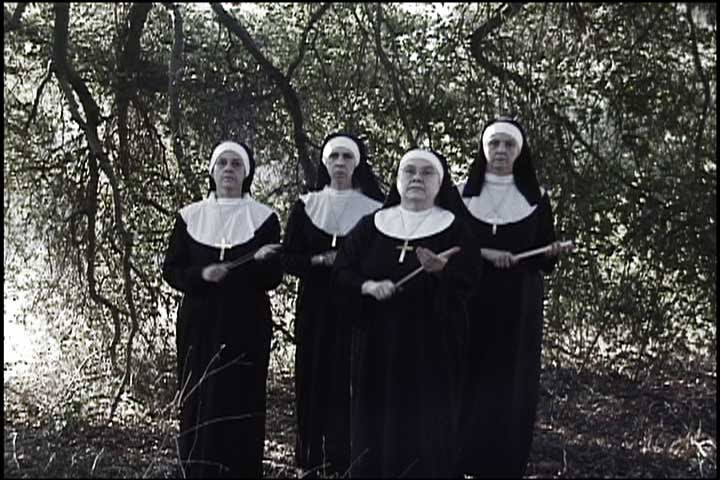 The LCWR readies for battle with Bishop Blair.

The following is an excerpt from a longer article published on the NCR website yesterday.
It deals with a second investigation the Vatican is launching into the state of American Religious Women. This second investigation involves the Leadership Conference of Women Religious. The LCWR represents approximately 95% of American Religious Women. It is an association of leaders of Congregations of Religious Orders. It is somewhat analogous to the USCCB in that it's composed of the leadership of the various orders. It certainly isn't analogous in any sense of authority.
The Vatican assessment has become necessary, according to Levada, because at the 2001 meeting between the women’s leadership conference and the Congregation for the Doctrine of the Faith, which took place in Rome, the women were invited “to report on the initiatives taken or planned” to promote the reception of three areas of Vatican doctrinal concern: the 1994 apostolic letter Ordinatio sacerdotalis, the 2000 declaration Dominus Jesus from the Congregation for the Doctrine of the Faith, and “the problem of homosexuality.” (At least they seem to have gotten the abortion thing right.)
Ordinatio sacerdotalis, Latin for “On the Ordination to the Priesthood,” was a Vatican document that reasserted that Catholic ordination to the priesthood is reserved for men alone and that the church “has no authority whatsoever to confer priestly ordination on women.” (I've always found it kind of fascinating that this is the only issue on which the church claims they have no authority.)
Dominus Jesus was a declaration that, in part, insisted that non-Catholic Christians are “in a gravely deficient situation in comparison with those who, in the church, have the fullness of the means of salvation” and that non-Catholic Christian communities suffer “defects.” It was viewed at the time by some Catholic theologians and leaders of other religions as a major setback in interreligious dialogue. (That's because it was a major setback.)
In a 1986 letter written by then Cardinal Joseph Ratzinger, now Pope Benedict, to the world’s bishops, he wrote: “Although the particular inclination of the homosexual person is not a sin, it is a more or less strong tendency ordered toward an intrinsic moral evil; and thus the inclination itself must be seen as an objective disorder.” (The most misleading term in this sentence is to refer to homosexuality as an 'inclination' as opposed to an intrinsic orientation. Notice how the word intrinsic is used to describe it's moral evil. In other words, this is the devil's work and not a God given orientation.)
Regarding the investigation of the women’s leadership conference, Levada informed conference leaders: “Given both the tenor and the doctrinal content of various addresses given at the annual assemblies of the Leadership Conference of Women Religious in the intervening years, this Dicastery can only conclude that the problems which had motivated its request in 2001 continue to be present.” (It's only been eight years, at least you could have given them fifty years like you did Maciel and the Legion.)
As a result, Levada said, the Vatican had decided “a doctrinal assessment” of the “activities and initiatives of the LCWR would be helpful.” (I'm quite sure that's already been done and that the answer to that has already been written.)
Levada added that the decision was reached while in communication with Cardinal Franc Rodé, prefect of the Congregation for Institutes of Consecrated Life and Societies of Apostolic Life.
Under Rodé’s leadership, his congregation last December announced it had begun its own investigation of U.S. women’s religious communities with the expressed aim of assessing the “quality of life” among their members and to determine why numbers of women religious have fallen in recent decades.
The Rodé study is being conducted under the direction of the superior general of the Apostles of the Sacred Heart of Jesus, Mother Clare Millea, whom Rodé appointed as apostolic visitator.
The new assessment of the women’s leadership conference, Levada stated in his letter, will be conducted by Leonard P. Blair, bishop of Toledo, Ohio, a member of the U.S. Conference of Catholic Bishops’ Committee on Doctrine. (Bishop Blair is as orthodox as they come. So orthodox he himself says the Extraordinary form of the Mass.)
Levada said Blair’s principal purpose is to “review the work of the LCWR in supporting its membership as communities of faith and witness to Christ in today’s church, and to offer any useful assistance.”

It looks to me like the big boys in the Vatican decided Mother Clare Millea wasn't up to the task of taking on the big bad women of the LCWR. Apparently Mother Millea doesn't have the right equipment to represent Jesus in this task of investigating American Women Religious. First and foremost I see this second investigation as a major insult to her and her abilities. If Mother Millea actually thought she had the confidence of the Vatican, I guess she now knows she doesn't.
The commentary on the NCR site was interesting to read. There weren't near the number of orthodox coming out to support the CDF as there were for the announcement of the first investigation. Are even the orthodox a little queasy about this second investigation? Why do American nuns merit two Vatican investigations when the Legion reluctantly only gets one, and the seminaries who cranked out all those abusers only got one? Does this mean uppity nuns are more intrinsically evil than sexually abusive priests? Or does it just mean it involves tricky treacherous women and tricky treacherous women need two Vatican salvos, not just one.
I keep waiting for the Vatican investigation into the USCCB and their penchant for covering up sexual abusers. Seems to me that's done a whole lot more damage to the American Catholic church than the tricky treacherous uppity nuns of the LCWR. Why that's even cost some dioceses to throw convents of nuns out on the street so they could sell off their property to pay off lawyers and abuse victims.
Of course those nuns were also placed under a gag order and removed from their property under their vows of obedience. Those are REAL nuns, not uppity treacherous liberal nuns. On the other hand there are these observations from an ex nun in the above linked article.
"One of the reasons I left is you have no voice," said Gutierrez, who wore the habit for eight years in the 1960s. Now retired from a second career teaching English, she expressed dismay that the Los Angeles archdiocese, after being pilloried for its reluctance to investigate allegations of sexual abuse, appeared to have gone to ground again.
"It's the same mistake all over again: 'Be quiet, be quiet. Don't say anything. Don't rock the boat,' " Gutierrez said.
Another former Bethany sister, Evangelina Diaz, said the defensive posture was also apt to hurt recruiting, seldom easy for the Catholic Church in recent decades.
"Look, a gag rule on three nuns! Holy mackerel!" said Diaz, 74, in the parking lot outside the convent. "They do this to the ones who've been around for 57 years? No wonder they don't get more vocations. Would you want to join?"
Perhaps Mother Millea will want to investigate why an Archdiocese would kick out three old nuns in order to sell their property. It may shed some light on quality of life issues as well as the recruitment problem.
I hardly think Bishop Leonard Blair would be motivated to take on such an investigation himself. He's had his own problems since coming to the Diocese of Toledo, and my gosh, one of his biggest problems involved an uppity nun.
This link is actually pretty fascinating. Toledo happened to be home to one of the most sensational of the abuse stories. A story that involved satanic ritual abuse, the murder of a nun and the subsequent cover up by both the diocese and the Toledo police. The priest, Fr. George Robinson was convicted in 2006 and sentenced to 15 years to life in prison.
Another kind of fascinating coincidence is that Toledo is the home diocese of Barbara Blaine the president of SNAP. The USCCB considers Barbara Blaine to be a very uppity and treacherous woman. She is not particularly fond of Bishop Blair and I'm sure the feeling is mutual. SNAP and the diocese waged quite a battle over opening a window of opportunity for abuse victims beyond the statutory limit. This was the Ohio bill for which Bishop Tom Gumbleton testified and where he admitted to his own abuse by a cleric. It was subsequently amended to remove the year window and then signed into law.
Bishop Blair did himself proud to get that year window out of SB 17 and now he gets to take on the LCWR. Barbara Blaine could probably give the LCWR some insight into the strategies of Bishop Blair---one of which was to call in the male clerical troops to take on uppity lay legislators from their pulpits. Apparently it worked well enough to get SB 17 amended to the Bishop's liking.
Personally, I'd love to see Bishop Blair go toe to toe with Sr. Joan Chittister. I'm sure Blair would win the day, having the entire Vatican male clerical corp behind him, but Sr. Joan would win the war of words, and in the end that's real power.
In the meantime, Mother Clare Millea has already been run over by the male clerical corp in their obsession with uppity liberal American nuns. I wonder if she realizes she has their tread marks all over her body?