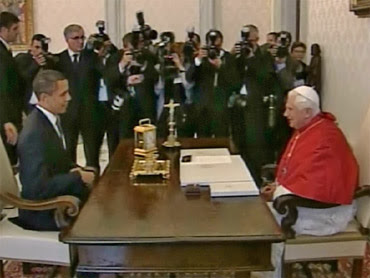 Is this a meeting between two global peace and justice socialists, or a trip to the wood shed for President Obama?


The Pope and Peoria
By Anthony Stevens Arroyo, Washington Post
For decades now, politics in the United States has tested relevance to Middle America by asking: "How will it play in Peoria?" The new papal encyclical, Caritas in Veritate, is a nuanced and carefully worded document of considerable length on the economic and social morality of globalization. I predict it will be the signature encyclical of the pontificate of Benedict XVI. But it won't play in Peoria. (It didn't play out too well in the world of Catholic neocons. George Weigel was downright insulting.)
Caritas in Veritate makes two assertions that will limit its appeal to Catholic America. First, the issue of abortion is made one of many and removed from the center stage of political issues. The pope sidesteps the argument that the primary political concern of Catholicism is to abolish abortion. This will surprise folks outside the Church who have caricatured Catholicism as a Johnny-one-note on political issues. More importantly, this papal encyclical will disappoint the American Catholics - laity and clergy alike -- who have considered abortion as the intrinsic evil that compels all the church's political attention.
(It's probably more accurate to say that this encyclical will disappoint those pro life Catholics who see the criminalization of abortion as the primary political concern of Catholicism.)
I am not suggesting that the encyclical revokes Catholic opposition to abortion (see #28). However, the pontiff contextualizes pro-life teaching by calling for remedies to the socio-economic causes of abortion, and much of the encyclical is dedicated to various aspects of how to end poverty and uplift the world's population with ample food, clean water, educational opportunities and the like (#43-51). Catholic Democrats will rightly consider this papal document to legitimize their alternative approach to Pro-life politics over the abortion-only policies that sounded very "Republican Party." Thus, the current divide in Catholic America will not be bridged with this instruction from Benedict XVI. In fact, the pope gives ammunition to the pro-life Democrats in their effort to reduce the number of abortions by addressing larger social issues. (Pope Benedict did call for remedies to the socio-economic causes for abortion but he didn't exactly endorse artificial birth control as an alternative to unwanted pregnancies. Nor did he address the fact that abortion is the birth control solution in too many impoverished countries.)
The second anti-Peoria directive is in sections #21-25 where Caritas in Veritate advocates governmental redistribution of wealth. The pope says governments should redistribute wealth to sustain domestic social services and whenever granting international aid. Unions are to be encouraged (#22, 25), immigrant workers are to be respected (#25), and the profit motive must be subordinated to morality and social justice (#35-37). The redistribution of wealth and energy with emphasis upon the quality of life fits the European context of a mostly Socialist economy better than the current economic structures of the United States. The culprits in a global economy, according to the pope are Capitalism and secularism (#37-38). (These are the ideas which have gone over like a lead balloon with Catholic conservatives. Apparently they prefer being trusted to take care of the poor from their own largesse on their own terms. Sort of the charity version of 'trickle down' economics.)
Although I believe Pope Benedict is insightful in his analysis, I do not think his words will play in Peoria. Many Catholics in America have absorbed the pro-Capitalist phobia against socialized medicine, government redistribution of wealth by taxation and anti-business regulations to protect the environment. When this encyclical urges socialist measures upon Catholics, Benedict XVI places the Church on the right side of history and the left side of U.S. politics. (On some of these issues Pope Benedict is quite to the left of President Obama.)
I suspect that there will be mighty few sermons in America next Sunday from Catholic pulpits to praise the papal message! The general message of love and truth will surely be lauded, but there will be little attention paid to details. Admittedly, a Sunday sermon is not the best setting to educate Catholics about the nuanced positions of papal teaching. Moreover, the political implications of the encyclical on this side of the Atlantic make it a hot-wire item, especially for Catholic Republicans. And while making Benedict into an Obama supporter will prove to be a temptation impossible for some to refuse, in fact, the papal teaching goes well beyond the proposals of Mr. Obama. Pope Benedict's teaching on social responsibility in an age of globalization, I fear, will not be understood or appreciated by most of Catholic America.
(I actually read one commentary from a conservative site in which the author states that the average Catholic really doesn't need to read this encyclical, as it's nothing particularly new, unlike Benedict's first two encyclicals.)
Globalization - a term so feared by those who suffer from the power of greedy corporations - is viewed by Pope Benedict as neutral itself, with the potential to reflect the "the unity of the human family and its development towards what is good" (#42). But it is not yet on the radar screen in most of Catholic America. (It will be on more Catholic radars as more US Catholics find themselves incapable of living above the poverty line.)
Rather than a hammered-together political platform, Caritas in Veritate might best be considered a packet of seeds. The long-term impact of this teaching is years into the future. The day morality intrudes into the market place decisions of governments will be the day that the encyclical flowers.

It's been fun to read conservative responses to Pope Benedict's encyclical. So far Caritas en Veritate has certainly focused the light on the truth that Conservative American Catholics are as cafeteria in their approach to the fullness of Catholic teaching as they have so loving accused their coreligionists on the left. This latest encyclical and the response to it, has certainly shown that Cafeteria Catholicism is a big tent.
One would hope that the biggest serving in the tent would be some humility, but somehow I doubt it. George Weigel in his review of this encyclical certainly showed zero humility or much respect for Benedict's intelligence. He blames most of the passages on wealth redistribution on loser social justice types from Paul VI's era. Come to think of it, he doesn't show much respect for Paul VI either. Even I never questioned Benedict's intelligence, although I might have said something about living in an Ivory Tower.
In the meantime, the oft called socialist President Obama has met with the newly minted socialist Pope Benedict. As of this writing there hasn't been much said about the meeting, only that it lasted twenty five minutes and that Pope Benedict tweaked his usual protocol and allowed for television coverage before their private meeting. Oh, and they did exchange gifts which I guess could be taken to mean they honored each other, but somehow I doubt there will be much of a hue and cry from the Cardinal Newman Society. They are probably too busy burning up phone lines and email accounts trying to figure out how to spin Caritas en Veritate for their true blue Catholic colleges into something which elevates free market capitalism to heavenly status. Good luck with that one.
In my opinion this encyclical will be prophetic for a couple of very important reasons. It's the first time this papacy has made a real effort to put some balance in the equation between social justice issues and family life issues. This is important because it's damn difficult to have much of a family life when the family can't sustain life. The inability of so many of our fellow humans to sustain life is the basis for the real culture of death. Weigel and his neo con buddies would prefer we ignored how much American interventionist policies and corporate greed have played into maintaining and creating that culture. That culture of death currently has one billion people on this planet facing starvation and millions here in the US one or two steps above starvation.
In my book placing criminalization of abortion before social justice is akin to a farmer throwing out seeds on an asphalt parking lot, believing it doesn't matter if they ever grow, just that they are given the chance to grow. I suspect in the discussion between President Obama and Pope Benedict on the the abortion issue, it wasn't about the criminalization of abortion, it was about providing access to a life style which sustains a culture of life. That is change the whole world wants to believe in and that is where real security for all peoples and all nations can be found. It's not found in Standard and Poors, or armies and armaments, it's found in the Beatitudes, and both men share common ground on those talking points.
Posted by colkoch at 8:08 AM