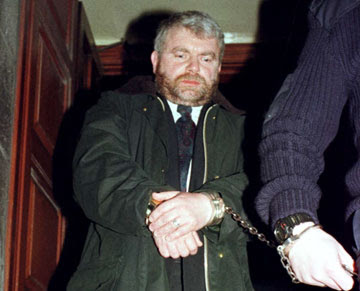 With the sentencing of serial pedophile Tony Walsh, Dublin faces another chapter in the Irish abuse crisis.

Pope Benedict gave a Christmas message about clerical abuse just as Archbishop Martin of Dublin faced yet another chapter in Ireland's abuse crisis.  The story of Tony Walsh was left out of the original Murphy report because a criminal case was still in court.  The details of the Walsh case can be found here, while the following is an excerpt from a NY Times article about Benedict's recent remarks.

ROME — Pope Benedict XVI said on Monday that the Catholic Church must reflect on the failures in its message that allowed for the sexual abuse scandal and that the church must find a way to help victims and not ordain potential pedophiles.

“We must ask ourselves what we can do to repair as much as possible the injustice that transpired. We must ask ourselves what went wrong in our message, in our entire way of being Christians, so that such a thing could have occurred,” the pope told the Vatican hierarchy in a pointed Christmas message. (I wish I knew who Benedict was referring to in his use of 'we'. If this references the hierarchy that's one message, but if he means the whole church, that's another message entirely. Or maybe he's using the formal papal 'we' which is a third message.)

Benedict said that that in 2010, abuse cases had reached an “unimaginable dimension.” In recent months, investigations in Ireland, Germany, Belgium and the Netherlands have found that clerics had sexually abused children in the past and the church hierarchy was often found to have covered up the abuse.....

.....The Vatican has said it is working on a series of guidelines for bishops around the world advising them how to handle abuse cases, including reporting abuse to civil authorities in countries where it is required.
In his remarks on Monday, the pope also thanked “the many good clerics,” but focused on ways the church needed to change.

“We are aware of the particular gravity of this sin committed by priests and our corresponding responsibility,” the pope said. But he added that the scandal should be seen “in the context of our times.”
(Isn't this a form of moral relativism?)

He said that as recently as the 1970s, pedophilia wasn’t considered as grave as it is today, and that today there is also a market in child pornography and sex tourism that some consider “normal” and yet that should also be condemned. (Puhlease. Stop this. A priest is either held to a higher standard or not.)

Pope Benedict just can't seem to bring himself to admit how devastating the clerical abuse scandal has been for Catholicism in the West.  Nor can he bring himself to face the fact it was far more a product of his own clerical culture than it was society.   I find this article especially frustrating today, given the recent release of more Irish abuse documents concerning one serial pedophile in the Archdiocese of Dublin.  In this particular case, the Vatican actually used the fact he was a diagnosed pedophile as a mitigating circumstance in refusing the Archdiocese's request to laicize him.  Apparently the thinking was he couldn't help himself.  The Vatican determined that the priest be 'sentenced' to ten years in a monastery rather than be defrocked.  Unfortunately for this plan, the Archdiocese couldn't find a monastery willing to take the offender. In the meantime the priest reoffended, was finally incarcerated and then the Vatican agreed to his defrocking.  Although the first reports of abuse were brought to the Archdiocese's attention in the late seventies, it took until the mid nineties before the priest was laicized, allowing him access to hundreds of victims.  Needless to say this is yet another blow to the Irish Church.

There's a part of me that can easily understand why Benedict is having trouble facing up to this scandal. It really does betray the priesthood on a very fundamental level and he has given virtually his entire life to a very idealistic version of the priesthood.  This betrayal of  Benedict's idea of the priesthood has to be something like a dagger to his own heart, but the fact is, his own history has it's moments when he was the one holding that dagger. And that is the problem with the clerical culture.  It seems to be able to compel otherwise good men to do very bad things in order to protect the magical/fantastical notions of the priesthood.

Sometimes this situation really does come way too close to mirroring the machinations of the Wizard of Oz.  Devious use of smoke and mirrors are designed to hide the laity from the truth of the men behind the curtain. They aren't clerical wizards. They are merely humans providing other humans a little courage, a little heart and compassion, some insight into life, and maybe some directions about how to get home.

When Benedict muses about what went wrong with the message, I hope he can entertain the thought that it might be the definition of the messengers which is what is wrong with the message.  Jesus didn't recruit a bunch of saints and celibates as His messengers.  He didn't demand they have any other special attributes beyond faith and a willingness to hear His teachings. They were every day guys who did their best to promote teachings they probably didn't understand all that well.  In my life, those kind of honest every day guys, guys who were capable of admitting there were things they didn't quite get, have had by far the most effect on my spiritual life.

Unfortunately I don't think Benedict is the Pope under which humanizing the 'sacred priesthood' is going to happen. Until that happens Catholics will continue to be exposed to priest abusers in order to protect the sacredness of the priesthood, and that is purely crazy.
Posted by colkoch at 8:22 AM