Lessons From St Thomas More, and "The Tudors" 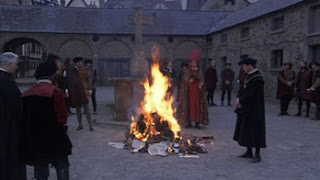 I spent yesterday watching the first season of the Tudor's. It was a Christmas gift, and since I could care less about college football I thought I'd watch a couple of hours to get a feel for the series. I wound up watching the entire 10 hours.

First some critical thoughts, the vicarious sex is overwhelming, especially when watching successive shows. It doesn't add to the story telling, although I'm sure it added to the story selling. That in itself is a statement about relativistic secular culture. Real historians have panned the Tudors because neither Henry nor his court, are considered to have engaged in open sexuality of this sort. Secret sexuality, most probably, but not as it's portrayed in the Tudors.

As well, the historical accuracy leaves something to be desired--actually a lot--but the emphasis on certain aspects of the history makes the inaccuracies easier to overlook. The Tudors may revolve around the 'love' story of Henry VIII and Anne Boleyn, but it's the secondary story about the Reformation and the issue of Papal infallibility which maintained my interest.

As original readers of this blog know, I have a great deal of interest in Thomas More. The Tudors portrays the less savory aspects of his story--A Man For Barbeque Season. He really and truly did use his position as Chancellor of England to burn English heretics, something his predecessor Cardinal Woolsey was not prone to do. In truth one of Europe's great humanists, was also one of it's most ardent inquisitors.

Thomas was rabidly incensed with William Tyndale who had the audacity to translate the bible from the original Greek into English. Thomas especially objected to Tyndale's interpretation of certain Greek words. Words like ekklesia, which Tyndale interpreted as congregation, rather than Church, and agape, which Tyndale translated as love, rather than charity.

This is not just a matter of semantics. Tyndale's interpretations put entirely different slants on key New Testament passages which directly effected the Catholic Church and it's mission. For instance, translating ekklesia to mean congregation radically changes Jesus's statement to Peter about being the rock on which the Church is built.

Congregation in place of church presents a different scope of authority for how Jesus saw Peter and the authority He was giving Peter. Congregation connotes a local authority, not a universal 'church'. In this context all of Paul and all his congregations have equal status with Peter's Jerusalem congregation. Allowing the idea of local congregations to have legitimate authority was anathema in a society based on the Divine Right of kings, and an even bigger threat to the notion of Papal infallibility.

This is why Henry gave free reign to Thomas's personal Inquisition while at the same time resenting Thomas's refusal to support his divorce. It's another reason why Anglicanism resembles Catholicism rather than Lutheranism. Top down authority had to be inculcated in the peasant classes or Henry would wind up with the mess Germany had--- a bloody peasant war which cost over 100,000 lives.

Thomas may have been a humanist, but not in the sense that we understand the term. He was a humanist only within the confines of existing authority structures. His humanism was based in a more benevolent understanding of the nature of man, but this benevolent nature needed nurturing through obedience to familial, educational, governmental, and spiritual authorities---all notions of which the Church is still quite fond. Consistent application of these virtues would lead one to success in this life and the next. The best place for the non noble to exercise these virtues were in the Legal and clerical fields where applied talent often led to advancement.

Tomas More and Cardinal Woolsey are perfect examples of how two intellectually gifted, but 'low' born men could rise to prominence in a class stratified society, but they also demonstrate how easy it is to fall at the whim of their 'higher' born, if less talented superiors.

The forces unleashed in Luther and Tyndale's theology coupled with Thomas More's humanistic philosophy would serve as the foundation for the Enlightenment. God does have a sense of humor in that the ideas of men who hated each other and what each other stood for, never the less had two key pieces of the same puzzle.

Unfortunately for Catholicism nothing has changed. Instead it has gotten worse. Papal infallibility is much broader now than when it was being argued in Henry's time. Intellectual ability will take one only so far in the Church before the real issue becomes obedience to Papal authority.

In Benedict's message of yesterday there are many unstated assumptions about the 'natural' order of society. Assumptions which come straight from the Middle Ages. One of them is that some people produce wealth and others simply drain wealth. Another is the notion that some people are born to lead others, hopefully ethically, and others are born to be led. All fraternally of course, as we do share the same planet.

He never specifically deals with corporate malfeasance or CEO's or wealthy individual families whose wealth is derived from exploitation. He speaks in generalities which become meaningless, because if he spoke in specifics he would lay the Institutional Church open to the similar charges.
Thomas More took the same kind of line in that he never criticised, and in fact supported, the nobility in their self same notions precisely because it opened the Church up to criticism.

And as always Benedict speaks of the traditional family and by this he means benevolent rule by male authority. This is the type of family epitomised and exquisitely portrayed by the More's in the Tudors. It's antithesis is also exquisitely portrayed by the Boleyn's in which Thomas Boleyn thinks nothing of exploiting both his daughters in pursuit of his own ambition.

That's the problem with a pre enlightenment notion of traditional family. Ambition, greed, maintenance of male authority, and the complete dependence of wife and children on the whims of the father, take precedence even in the most benevolent of families. Even Thomas More left his family practically penniless and destitute in his own drive to pursuit his own conscience, while forbidding his family to follow their consciences, and burning others for following theirs.

There is nothing really fraternal or spiritual about insisting others follow one's own conscience, especially if one has any authority over others. It generally leads to tyranny. Under JPII the Church has redefined Papal infallibility to levels never before seen, especially in the 1983 Code of Canon Law. It's a trend which flies in the face of the Winds of Change, and for those with different ideas it truly does represent a form of tyranny.

I take great comfort in the fact that even though Thomas More thought he was upholding God's plan for humanity by attacking Tyndale and Luther, God had other ideas. Both were part of the plan. It maybe true that God will again have the last laugh, and that progressives and conservatives will find ourselves pieces of the same but much bigger puzzle. What a hoot that will be--at least for some of us.
Posted by colkoch at 10:06 AM