The Two Christologies As Expressed In Ireland's Abuse Crisis 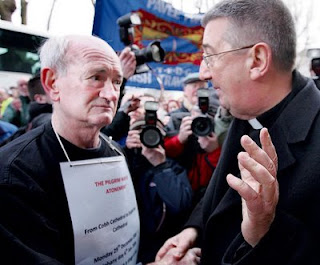 Fr. Michael Mernagh greeted by Archbishop Diarmuid Martin of Dublin at the end of his Walk of Atonement

There is an important story that has been developing in Ireland since just before Christmas. It involves the handling of priest sexual abuse cases. The first and probably most inflammable story line is the mismanagement of two cases in the Diocese of Cloyne, and second story line involves the issuance of a report from the Health Services Executive of the Irish government delving in to the response to the sexual abuse crisis in all of Ireland's dioceses. That report is due out today and is expected to be the second independent board to single out the Diocese of Cloyne for it's mishandling of two alleged priest abusers since 2002. You can find a great deal more about both of these stories on clericalwhispers.

The Episcopal head of the Diocese of Cloyne is Bishop John Magee. Bishop Magee has a long history with the Vatican, having been secretary to three popes, Paul VI, John Paul I and John Paul II. JPII recognized his long service the the Papacy with elevation to bishop and appointment to the Diocese of Cloyne in 1987.
For those who have bothered looking into the death of JPI, Bishop Magee either did or did not discover the body of JPI. It depends on whose story you want to believe, the official or the unofficial statements, the conspiracy theorists, the novelists, or Bishop Magee whose tellings have lacked consistency.
What is consistent about Bishop Magee is that he seems the type of prelate who would do what ever it took to protect the Church from scandal, and so it should come as no surprise that he didn't exactly follow Irish Church protocol on dealing with abusive priests. In fact, he seems to have reverted to the Cardinal Law school of protocol, and, as in the case of Cardinal Law, there are many many calls for his resignation. He has, up to this point, ignored those calls. The Vatican is rumored to be upset with his stance, but has not officially said anything. If the Vatican chooses to react, I imagine it will be in the nature of a promotion to Rome.
The Vatican promotes problem bishops because it's perceived to be the only way they can remove a problem without violating Canon Law regarding the direct authority of a bishop in his own diocese. This is a glorious example of how excessive legalism can box one into doing the exact opposite of what they may want to do, or what is JUST.
There is another fascinating story with in this story. One which exemplifies the exact opposite of Bishop Magee. It's the story of Father Michael Mernagh, a 70 year old Augustinian priest who decided to do something about showing some solidarity with the victims of priestly sexual abuse. Fr. Mernagh is no clerical politician as can be seen from the following report:

FATHER MICHAEL Mernagh ended his 300km walk of atonement yesterday afternoon with applause from a waiting crowd and an embrace from Archbishop of Dublin Diarmuid Martin.
The archbishop was waiting on the steps of the Pro-Cathedral to welcome back a priest who has been calling for the resignation of the Bishop of Cloyne, Dr John Magee, since it emerged that the Catholic Church's own investigation had revealed serious flaws in the Cloyne diocese's handling of allegations of clerical sex abuse.
Though he is 70, Fr Mernagh, a former marathon runner, began his walk from the seat of the diocese at Cobh Cathedral on December 30th without training or preparation and at a time when most people's minds were on festive matters.
"He's a man of principle. I respect anybody like that. I appreciate very much his gesture, but it's his day and it's a credit to him," said Archbishop Martin whose public gesture of support for Fr Mernagh is likely to make life more uncomfortable for the embattled bishop. (Archbishop Martin is a straight shooter and seems to be a good guy who is taking the abuse crisis in the Irish Church very seriously.)
Fr Mernagh was anxious to arrive on time, but, despite visits to Our Lady's Hospice in Harold's Cross and Christ Church Cathedral, the sprightly pace that the Augustinian priest has kept throughout his 300km odyssey meant that he arrived 11 minutes before his scheduled 1.30pm finish.
At 10am the priest set out from the Augustinian Novitiate in Templeogue in the company of about a dozen supporters including a Traveller couple, Mick "The Man" Connors and his wife Nan, who Fr Mernagh had helped back in 1984 when he stood in front of a bulldozer to prevent them being evicted from a site.
By the time he completed his journey he was joined by at least 50 others. They included Paddy Doyle, the wheelchair-bound author of The God Squad, the searing autobiography which was published in the 1980s before the trickle of clerical sex abuse allegations became a flood, fellow abuse victim Marie Collins and the co-ordinator of Irish Survivors of Child Abuse (SOCA) John Kelly.
They were joined by Barnados' chief executive Fergus Finlay, Sister Stanislaus Kennedy and Travellers from the Pavee Point project. Augustinian priests Fr Liam Ryan and Fr Ben O'Brien also shared the journey.
Fr Mernagh's first act on arrival at his final destination was to praise the weather, which has been remarkably dry throughout his walk given the time of year, the Irish countryside and the support of so many people.
"I realise one thing, though, as I'm ending this part of my journey: our journey to give justice and to make atonement is only beginning," he said.
"I have called, as I've called in the past, on the priests and bishops for a new heart of atonement. We must recognise that we are all at fault to allow this horrific history of clerical child abuse to go on. We need to come out of our denial, all of us, and ensure that this never happens again.
Before he began his walk, Fr Mernagh paid a visit to Bishop Magee. "As I told him in the sacristy in Cloyne, he must carry out his responsibilities. If he has failed, or I have failed, then I have to take the consequences of that.
"For the sake of his own clergy and his people, he has admitted he has been at fault. It is logical for him to step aside on all accounts.
Fr Mernagh laid the placard which he carried around his neck on the altar of the Pro-Cathedral and, after leading the congregation in the Magnificat, received a standing ovation from the crowd. (This is in one sense a sad statement that Catholics have to give a standing ovation to recognize a priest acting like a priest.)

Fr. Mernagh vs Bishop Magee is in some sense a metaphor for Bottom Up Jesus vs Top Down Jesus. Archbishop Martin, at least in this case, is acting from Bottom Up Jesus. It's a great thing to see.
In my research on Bishop Magee, I ran across an address he gave to the 2006 commencement class at St. Francis of Steubenville, Oh. Stuebenville is a bastion of Top Down Jesus theology. In his address Bishop Magee spoke about life with the three popes he served under as a personal secretary. He had this to say about John Paul I:
"On three occasions during the Pontificate of Pope John Paul I, the Holy Father asked me to offer Holy Mass and allow him to be my little altar server. I felt truly humbled myself but he insisted. The last time was two days before he died. It reminded me of the Lord Jesus kneeling to wash the feet of His disciples."