Now For Something Really Important 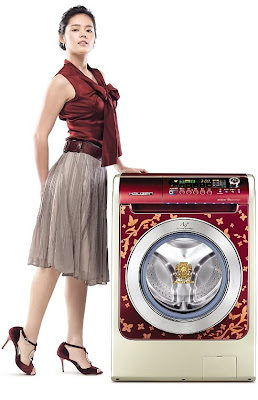 Washing machine brought rights to women: Vatican
The washing machine has had a greater liberating role for women than the pill, the official Vatican daily said in an International Women's Day commentary Sunday.
"The washing machine and the emancipation of women: put in the powder, close the lid and relax," said the headline on the article in Osservatore Romano.
"In the 20th cenutry, what contributed most to the emancipation of western women?" questioned the article.
"The debate is still open. Some say it was the pill, others the liberalisation of abortion, or being able to work outside the home. Others go even further: the washing machine," it added.
The long eulogy to the washing machine - for which the first rudimentary models appeared in the 18th century - highlighted "the sublime mystique to being able to 'change the sheets on the beds twice a week instead of once'," quoting the words of late American feminist Betty Friedan.
While the machines were at first unreliable, technology has developed so quickly that now there is "the image of the super woman, smiling, made up and radiant among the appliances of her house," wrote Osservatore. (Most women I know don't get made up to do laundry--just an observation.)

Neither my mother, nor myself would agree with the Vatican's assessment of the liberating qualities of washing machines. My mother firmly believed all they accomplished was to add more to her work load because every one's expectations for clean clothes became excessive. She also firmly believed washing machines encouraged the purchasing of lots of clothes people didn't need, which in turn forced her to wash more loads.
If I were to list her two favorite liberating inventions they would be permanent press clothes and the micro wave oven. They are two of my favorites as well. In fact, in our house if one of us were to be stupid enough to purchase non permanent press clothing my mother more or less refused to wash it, or she forced them to pay me to iron it. I always bought permanent press. She often lamented that in raising us all as babies she didn't have a micro wave for all our formula. It was so much faster and more accurate than heating bottles on a stove.
The best things about micro waves were the processed foods that one could purchase for them. Our family became tediously acquainted with all things Stoufer. Dad actually had to buy another freezer for all things Stoufer. It's not surprising that I personally have nothing in my freezer which says Stoufer. There is that whole concept concerning too much of a good thing.
When I read this Vatican assessment on the liberation of women I could hear my late mother's harrumph in the back of my mind. Typical asinine male assessment. Only men with no children would opt for the washing machine over the micro wave. She would say these Vatican men could wax eloquently on the labor saving qualities of the washing machine because they mostly didn't use them. The microwave was male friendly from it's inception and so would not be seen as something that liberated women.
My mother was always mystified that the men in our family could tear apart huge diesel engines but be completely incapable of discerning the mysteries of laundry. The micro wave was a different story. Hot snacks and all that. They got so infatuated with our first micro wave that they did a lot of the cooking. Testing it's capabilities or something. That truly liberated my mother. From then on she was waiting for some technological breakthrough in washing machines that would equally capture their attention. It never happened and all the filthy ranch clothes were always her responsibility, or us girls.
For some reason, I never quite got the concept that doing my brothers laundry increased my femininity. If anything it increased my suspicions that girls in my family did not have the same status as boys. Somehow the laundry room was not the special girl territory my brothers tried to make it out to be. A place that was beyond their male capacity, a foreign territory where they might break things in their male ignorance.
For me it was a place where I over loaded, over dried, purposely wrinkled, mixed whites and colors, and in general created havoc. My mother soon tired of my passive aggressive attitude towards laundry and I was relegated to the ironing board, but she also insisted if my brothers actually wanted something ironed, they had to pay me.
I bought a lot of Beatles albums with their money, especially off my one brother's Army uniforms. Starching things cost way more than normal ironing. I loved the US Army's uniform code. Ironing wasn't exactly ego fulfilling, but it was a whole lot better than doing washing for free. Finding out she could convince her children to pay another child for ironing was also a liberating concept for my mother. Far more liberating of her time than the washing machine could ever be.

In all honesty, I can't take this little ditty from the Vatican seriously. If they truly do believe the most liberating thing for women in the twentieth century is the washing machine, they are truly out of touch with where women are really at. It's the pill, they just can't admit that. Or maybe it's because they can imagine the Virgin Mary using a washing machine but not the other thing.
Posted by colkoch at 11:44 AM