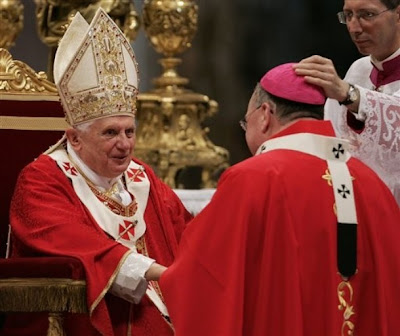 AB Dolan was working the press Sunday at Mass most like to insure a change his lid color to red.
Pope Benedict being 'scourged at the pillar,' says New York archbishop
New York City, N.Y., Mar 30, 2010 / 06:22 am (CNA/EWTN News).-
In remarks following Palm Sunday Mass, Archbishop Timothy Dolan of New York urged Catholics “to express our love and solidarity” for Pope Benedict, who, given the recent media onslaught over sex abuse allegations, is “now suffering some of the same unjust accusations, shouts of the mob, and scourging at the pillar, as did Jesus.” (I haven't noticed anyone dragging out actual whips. I personally find this whole line insulting in it's papal idolatry.)
Following the March 28 Mass in St. Patrick's Cathedral, the prelate began his brief statement by stating that the “somberness of Holy Week is intensified for Catholics this year” as the “recent tidal wave of headlines about abuse of minors by some few priests, this time in Ireland, Germany, and a re-run of an old story from Wisconsin, has knocked us to our knees once again.”
“Anytime this horror, vicious sin, and nauseating crime is reported, as it needs to be, victims and their families are wounded again, the vast majority of faithful priests bow their heads in shame anew, and sincere Catholics experience another dose of shock, sorrow, and even anger,” Archbishop Dolan said. (AB Dolan hasn't exactly been forthcoming on the idea of reporting. see below.)
But the Archbishop of New York found a more troubling aspect of the recent spate of news. “What deepens the sadness now is the unrelenting insinuations against the Holy Father himself, as certain sources seem frenzied to implicate the man who, perhaps more than anyone else has been the leader in purification, reform, and renewal that the Church so needs,” the archbishop asserted. (If this was true, Dolan would not now be Archbishop of New York since his history is replete with protecting the 'filth' at the expense of victims.)
“Sunday Mass is hardly the place to document the inaccuracy, bias, and hyperbole of such aspersions,” he added.“But, Sunday Mass is indeed the time for Catholics to pray for … Benedict our Pope.” (Nice cop out.)
“And Palm Sunday Mass is sure a fitting place for us to express our love and solidarity for our earthly shepherd now suffering some of the same unjust accusations, shouts of the mob, and scourging at the pillar, as did Jesus.”
Archbishop Dolan then defended Pope Benedict from the articles attempting to establish that he mismanaged sexually abusive priests. (Wait until the press gets on the notion of Benedict mismanaging the assignments of bishops who covered up, coddled, and transferred abusing priests---like AB Dolan.)
“No one has been more vigorous in cleansing the Church of the effects of this sickening sin than the man we now call Pope Benedict XVI,” Archbishop Dolan stressed. “The dramatic progress that the Catholic Church in the United States has made – documented again just last week by the report made by independent forensic auditors – could never have happened without the insistence and support of the very man now being daily crowned with thorns by groundless innuendo.” (I think he's mixing up Benedict with the Boston Globe as it was the Globe without which this 'dramatic progress' could never have happened.)
“Does the Church and her Pastor, Pope Benedict XVI, need intense scrutiny and just criticism for tragic horrors long past?” the prelate asked. “Yes! He himself has asked for it, encouraging complete honesty, at the same time expressing contrition, and urging a thorough cleansing.” (Benedict has never asked for any of this as it pertains to himself--just others.)
“All we ask is that it be fair, and that the Catholic Church not be singled-out for a horror that has cursed every culture, religion, organization, institution, school, agency, and family in the world.”
“Sorry to bring this up,” Archbishop Dolan concluded, “… but, then again, the Eucharist is the Sunday meal of the spiritual family we call the Church. At Sunday dinner we share both joys and sorrows. The father of our family, il papa, needs our love, support, and prayers.”

Archbishop Dolan certainly passes Pope Benedict's loyalty test. Not surprising since Dolan owes his entire career as an archbishop to principally to Benedict. AB Dolan found himself promoted to the Archbishopric of Milwaukee just under a year after his installation as an auxiliary bishop in St. Louis. Dolan wasn't just on the fast track, his rise in the American Church has truly been meteoric. Interestingly enough, Dolan replaced Archbishop Weakland in Milwaukee. Dolan was supposed to be a savior, coming in to clean up the mess left by Weakland.
So how did he do as a cleanser of Benedict's 'filth' in Milwaukee? Here's the review of his tenure from Bishopaccountability.org:

Archbishop Timothy Dolan “Clergy Abuse Fact Sheet”
Dolan record as Archbishop of Milwaukee, 2002-2009
Note: There are 67 clergy offenders from the Milwaukee archdiocese substantiated child sex assault reports, including 2 deacons and 20 religious order clergy.
In August of 2002, a bishop for less than a year in St. Louis, Dolan was appointed archbishop of Milwaukee, to replace the disgraced Rembert Weakland. Weakland had just been discovered to have paid a former Marquette University seminarian a half a million dollars in hush money for a sexual abuse allegation that Weakland characterized as a sexual relationship.
While in Milwaukee –
Dolan has failed to report direct admissions by clergy sex offenders concerning prosecutable cases of child rape. In February of last year, Sr. Norma Gianni was convicted of child sex assault in Milwaukee County after victims went to police. Yet archdiocesan officials, under the direction of auxiliary Bishop Richard Sklba, had obtained a previous confession [see article].
In March, Fr. Bruce McArthur was sentenced for child sex abuse in Juneau County although McArthur had also admitted to the archdiocese that he had assaulted children in several parishes in Milwaukee and a hospital chaplain West Bend [see article].
Dolan is leaving priests or clergy in ministry or publically presenting themselves as priests in the Milwaukee archdiocese, in violation of the 2002 U.S. Bishops Charter to Protect Young Children, including Fr. Joseph Mika, who has admitted to child sex assault while a pastor in the Green Bay diocese and is now living with Dolan’s permission in Milwaukee. Victims groups in Milwaukee are claiming there are more such clergy still working under Dolan [see article].
Dolan secretly paid off one of Milwaukee’s most notorious priest child molesters, Fr. Franklyn Becker, in exchange for the priest to sign papers to leave the priesthood. Dolan sent a delegate to Becker to then assure him that the archdiocese would not publicize why he had left the priesthood [see article].
In a June deposition released in November, former Milwaukee archbishop Rembert Weakland revealed what had long been suspected that Dolan’s number two man, Bishop Richard Sklba was his “go to man” in all sex abuse cases and covering up child sex crimes from authorities and parishioners [see article and the relevant page from the Weakland deposition].
Dolan has refused to remove Sklba from his post, saying that he has “complete confidence” in Sklba [see article].
Dolan, according to Weakland, has never once talked with him about the scores of abusive priests in the archdiocese nor has Dolan read or viewed Weakland’s deposition admitting to concealing and transferring sex offenders to “every parish” in the Milwaukee archdiocese [see article and the relevant page from the Weakland deposition].
In September, Dolan told archdiocesan leaders that due to fraud cases filed against abusive priests and their bishops the archdiocese is going to face a “big financial hit” that is likely, according to archdiocesan officials, to lead to bankruptcy [see article].
Dolan has repeatedly lobbied against sexual abuse reforms in Madison, including a bill that would allow childhood victims of sexual abuse by non-blood relatives to bring cases to Wisconsin civil courts [for example, see article].
Last year, Dolan permitted a letter to be published in the Catholic newspaper describing clergy child sex abuse victims as “prostitutes” [see memo].
Weekly church attendance under Dolan in the Milwaukee archdiocese has dropped every single year and the rate of decrease is increasing at an alarming rate [see press release with links].
Other informative documents from Milwaukee about the clergy abuse crisis and cover up --
Read a 2004 history of sexual abuse of children in the archdiocese of Milwaukee.
Read the entire transcript with video excerpts of former Milwaukee archbishop Rembert Weakland's deposition.
Dolan’s record as Auxiliary Bishop of Saint Louis, 2001-2002
While in St. Louis --
Dolan left at least three priests in ministry who were charged in civil court with child sex assault, including one, Fr. Thomas Graham who was later convicted by a jury [see article].
May have failed to supervise Fr. Gary Wolken, a priest sex offender living with Dolan at Our Lady of Sorrows rectory in St. Louis. Wolken was arrested in 2002 for raping and sodomizing a boy from age 7 to 10. Wolken had already been under suspension for child sex abuse [see article].
Wrote a letter to the judge at Wolken’s sentencing to keep Wolken from prison, praising Wolken. Wolken was sentenced to 15 years Dolan refuses to release the letter [see article].
Besides Wolken, Dolan was also living at Our Lady of Sorrows with another priest sex offender, Fr. Michael Campbell. Campbell was removed from ministry for substantiated abuse reports in 2002. Dolan praised Campbell to parishioners saying he trusts him so much he would go to him for confession [see article].
After being suspended in March 2002, Dolan's friend Campbell showed up just weeks later, in April, on the altar of a nearby parish (during Holy Week, no less) to the consternation of many parishioners [see article].
Dolan failed to meet with abuse victims or reply to direct abuse reports [see article].
Archbishop Dolan is himself the perfect example of why the media can not let Benedict off the hook. The abuse crisis is not just about individual predators, it is more correctly a systemic crisis aided and abetted by various forms of misguided loyalty and obedience in the episcopacy.
Benedict himself, as Cardinal Ratzinger, repeatedly caved in to other clerics and JPII when it came to this issue. He had ample opportunity to follow his conscience and blow his whistle but chose silence and obedience. For this alone his castigation of Irish bishops and other clerics rings not just hollow, but self serving. Kind of like Dolan's defense of Benedict.
Posted by colkoch at 7:38 AM