Cardinal Solomon In All His Glory 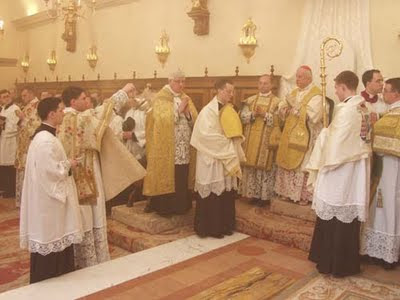 For those who are interested the National Catholic Reporter has more photos Cardinal Rode in all his worldly splendor. They also have an interview with Cardinal Rode which is every bit as fascinating to read as his celebratory finery is to contemplate.

I couldn't help but notice how the above photo demonstrates what an inclusive church Cardinal Rode's vision encompasses. Notice all the poor people and women? What can you expect, this is a photo taken at the consecration of some male Deacons. No wonder there are no poor people or women. Sheeesh. This was a ceremony for the important people in the Church.

In his interview Rode maintains he had nothing to do with either the LCWR investigation or the Legionnaire's. I'm quite ready to believe that was true in the case of the Legionnaire's. I'm not so sure about the LCWR. Rode blames it on younger members of LCWR congregations and American Cardinals in Rome. I guess that proves that the Vatican is willing to take some sisters seriously. He then glowingly describes the new religious orders and the numbers of new adherents and how wonderful all this is for the Church. This comes after he has this to say about Vatican II:

Looking back, Rodé believes that Vatican II, while designed to generate a moderate reform, instead triggered “the greatest crisis in church history.”

“In the 16th century, during the Reformation, many religious left the church and many convents were closed, but it was geographically limited, more or less to Northern Europe,” he said. “In the French Revolution, there was another catastrophe, but it was limited to France. The crisis after the Second Vatican Council, however, was the first truly global crisis.”
“We’ve paid a very steep price due to a secularized, worldly mentality,” he said.

Judging from his choice in liturgical dress up, no one is going to accuse Rode of having a 'secularized, worldly mentality'.

Basta, I say!! The pictures themselves are worth thousands of words. I don't need to add any more.