I Attend A Pax Christi Meeting And Suffer Brain Lock 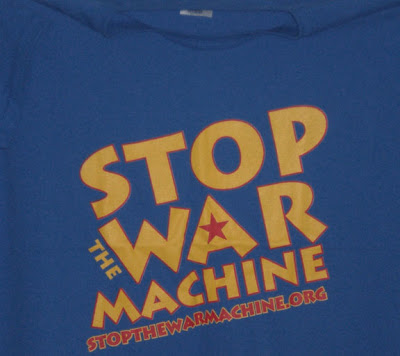 Yesterday I made the short trip to Santa Fe to check out Pax Christi New Mexico. I had intentions of actually acting like a journalist and interviewing Fr. John Dear or Fr. Louis Vitale. Instead I got brain locked by a workshop on the influence of the Military Industrial Complex on the State of New Mexico. I forgot to do any interviews, but I did get Fr. Dear to autograph a copy of his autobiography "A Persistent Peace". I appreciated not having to pay an exorbitant amount of money to meet two of my heroes and make some new ones. In fact, I didn't have to pay anything. I donated from my heart.
The factoid which brain locked me was that Kirtland Air Force Base is storing 1900 disarmed nuclear warheads. Each of these warheads is reputed to be 100 times more powerful than the ones dropped on Japan. Which means Kirtland is storing the equivalent of 190,000 Hiroshima sized nukes. These are not part of our operational arsenal which is estimated to be somewhere around 8000. I kept asking myself why the US needed to build this kind of nuclear arsenal. This is so far beyond over kill it's incomprehensible.
I had this vision of the proverbial crazy uncle who never found a newspaper or magazine he could throw out. He just had to keep adding and adding to his collection until there was virtually no usable space left in his house and one navigated past tall stacks of newspapers and magazines which shaped narrow little aisles. I'm sure the storage areas at Kirtland are more organized than this image, but still, who benefits from this craziness of our very own Uncle Sam?
I can think of a few people--a very few people. It's certainly not the State of New Mexico whose child poverty rate in some of the very counties the DOD has set up shop exceed 40%. The only county whose poverty rate is below 10% is--shock--Los Alamos, at 2.7%. Albuquerque is in Bernallilo county, and it's child poverty rate is at 20.4%.
Your tax dollars given to DOD contractors in New Mexico between 2000-2008 is $9,602,546,507. That's nine trillion, six hundred two million plus dollars spent in this state by the Federal Government. To give this number another frame of reference, the war in Iraq has cost us 692 billion. And yet with all this money, at a poverty rate of 19.3%, New Mexico is third behind Louisiana and Mississippi. Where has all the money gone? Out of state, that's fer sure.
In effect, what's happened in New Mexico is that it is a dumping ground, testing center, and ugly step child of the Military Industrial Complex. A small coterie of businessman and politicians have lined their pockets by bending over for DOD dollars and allowing unfettered access to the Land of Enchantment for the Wizards of Mass Destruction. The numbers just locked my brain and I forgot to be a real journalist.
I can write that as I scribbled notes on statistics and weapons projects, Fr. Dear was sitting right next to me scribbling the same notes. I think he might have gotten brain locked too. At one point there was an open discussion on the topic of where has all the money gone. The general consensus was Wall Street and their neo con corporate buddies, which means most of it's probably off shore. I, who sometimes needs a verbal censor, stated some of it had to be going to the religious right and some of that meant the religious right in oh say, Africa, if the current synod indicated anything. Why else would those bishops keep mentioning abortion and gay marriage in the States. They had to be getting some kind of payback for their efforts. I thought I maybe had gotten out of line, but I got a very big smile from a certain Franciscan.
I'll post more on this Pax Christi meeting in the coming days because there is more to post, but I had to get unbrainlocked before I could deal with other events. I will say I bought a sweat shirt from Stop The War Machine.org because this grass roots effort surely deserves support. Their mission is too important not only to the captive citizens of New Mexico, but to the world.
One last thought. Unlike a certain New Age guru, Fr. Dear and Fr. Vitale are the real deal.
Posted by colkoch at 8:00 AM