Back And More Stunned Than Ever 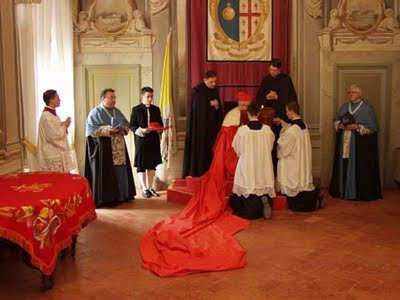 Cardinal Rode surrounded by the splendor of European culture. Note the absence of any shallow vocations from any non white non European sycophants.

VATICAN CITY -- A top Vatican official said religious orders today are in a "crisis" caused in part by the adoption of a secularist mentality and the abandonment of traditional practices.
Cardinal Franc Rodé, prefect of the Congregation for Institutes of Consecrated Life and Societies of Apostolic Life, said the problems go deeper than the drastic drop in the numbers of religious men and women.
"The crisis experienced by certain religious communities, especially in Western Europe and North America, reflects the more profound crisis of European and American society. All this has dried up the sources that for centuries have nourished consecrated and missionary life in the church," Rodé said in a talk delivered Feb. 3 in Naples, Italy.
"The secularized culture has penetrated into the minds and hearts of some consecrated persons and some communities, where it is seen as an opening to modernity and a way of approaching the contemporary world," he said.
Rodé said the decline in the numbers of men and women religious became precipitous after the Second Vatican Council, which he described as a period "rich in experimentation but poor in robust and convincing mission."
Faced with an aging membership and fewer vocations, many religious orders have turned to "foreign vocations" in places like Africa, India and the Philippines, the cardinal said. He said the orders need to remember that quality of vocations is more important than quantity.
"It is easy, in situations of crisis, to turn to deceptive and damaging shortcuts, or attempt to lower the criteria and parameters for admission to consecrated life and the course of initial and permanent formation," he said. (What in the world is he saying here? That white Anglo European vocations are more true and valid than other vocations?)
In any case, he said, "big numbers are not indispensable" for religious orders to prove their validity. It's more important today, he said, that religious orders "overcome the egocentrism in which institutes are often closed, and open themselves to joint projects with other institutes, local churches and lay faithful." (Perhaps Rode is slyly referencing the style of Opus Dei and the Legion who combine lay apostolates with consecrated religious and insinuate their view of Catholicism in ordinary dioceses.)
Rodé, a 75-year-old Slovenian, is overseeing a Vatican-ordered apostolic visitation of institutes for women religious in the United States to find out why the numbers of their members have decreased during the past 40 years and to look at the quality of life in the communities.
He spoke Feb. 3 to a conference on religious life sponsored by the Archdiocese of Naples. The Vatican newspaper, L'Osservatore Romano, published the main portions of his text.
Rodé said it was undoubtedly more difficult today for all religious orders to find young people who are willing to break away from the superficial contemporary culture and show a capacity for commitment and sacrifice. Unless this is dealt with in formation programs, he said, religious orders will produce members who lack dedication and are likely to drift away. (Perhaps the Benedictines should start their own version of Hitler youth.)
The challenge, however, should not be seen strictly in negative terms, he said. The present moment, he said, can help religious orders better define themselves as "alternatives to the dominant culture, which is a culture of death, of violence and of abuse," and make it clear that their mission is to joyfully witness life and hope, in the example of Christ. (The dominant culture in which Rode grew up was all about death, violence, and abuse. That was the Catholic European culture he seems to miss. He also seems to have forgotten he was liberated from that culture by the generosity of North American blood and sacrifice. The very same North American blood which flows through the veins of the LCWR. And some of that North American blood was not white European blood, but Black, Hispanic, and Native blood.)
Rode told Vatican Radio Feb. 2 that his office was working on two documents: a joint document with the Congregation for Divine Worship and the Sacraments on the importance of prayer in the life of religious; and a document highlighting the importance of religious brothers in the church. ( I can't wait to read Rode extolling on the virtues of religious brothers as opposed to the vices of religious sisters. Won't that be a novel change.)

If this little message from Cardinal Rode is indicative of where the Vatican has it's brain, then Catholicism is truly facing a serious crisis of mission. This is an incredible insult to any Catholic whose skin is not white and whose native origin is not European or North American. Even if Rode meant to insinuate that North American congregations were using developing countries to pad their numbers, it's still completely outrageous.
This message seems to me to be a very clear statement that Roman Catholicism is at it's core all about white European male culture. Rode would have us believe that that culture, as modeled by Roman Catholicism, is Christ's preferred culture. For some reason I doubt that Christ had white European culture in mind when he described the Kingdom.
Maybe the sin being committed by the LCWR is that it no longer bows down to that culture, somehow having gotten to the point where the violence, domination, and death in white European culture no longer has any credibility. It was after all, this Catholic European culture that gave us the twentieth century horrors of totalitarian fascism, totalitarian communism, and the subjugation and domination of non white non European cultures.
This is a stunning message in the depth of it's pathology and maybe that's a good thing. It shines a very bright light on the choices we are being asked to make as members of the 'Catholic' church. It's only 'Catholic' if one is willing to agree to the supremacy of European culture and the world view of it's elitist white male leadership.