The Catholic Pursuit Of A Culture Of Death In The Philippines 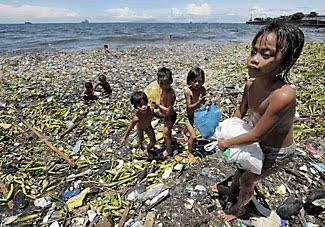 I have posted this photo previously. It truly haunts me, as does this topic in this country. Follow the link for the opinion of a more enlightened Catholic opinion, that of Cardinal Cottier.

QUEZON CITY, Philippines — The church's catechism opposing the Reproductive Health Bill, which is now before Congress, has silenced election candidates on women's rights, a leading advocate of the proposed law says.
Politicians seem to have "all meekly acquiesced to the dictates" of the Episcopal Commission on Family and Life, which issued the "Catechism on Family and Life" for the 2010 elections, former Health Secretary Alberto Romualdez said. National, provincial and local elections will be held nationwide May 10.
The Catholic church teaches that married couples must have as many children as they can support and educate. It allows only for natural family planning methods.
The bill before Congress proposes allotting funds for a population control program to curb poverty. (This is not precisely true. Ultimately the Church teaches couples must allow all pregnancies that happen irrespective of whether they can support or educate them.)
Romualdez urged supporters of the bill not to allow "religious extremists to dominate the discussion or suppress it altogether."
"Reproductive heath advocates should view with concern the deafening silence of presidential candidates and politicians in general on the issue of reproductive health," he said.
Romualdez is the trustee of the Forum for Family Planning and Development. The organization is an association of national, business and other leaders funded by international donors, including United Nations Population Fund and the Bill & Melinda Gates Foundation.
At a recent forum on "reproductive health rights of Filipinos and the 2010 national elections," Romualdez and other supporters of the Reproductive Health Bill said the church was interfering in politics.
"Interference by a religious body in civil and political affairs is a violation of our constitution's section on the separation of church and state, and candidates should take a stand on this," Romualdez said.
Ramon San Pascual, executive director of the Philippine Legislators' Committee on Population and Development Foundation, told the forum the church should stay out of the debate.
"Priests and bishops are not allowed to become parents and to have families … and yet they are involved in the issue of taking care of the bodies of women," he said.
The 2008 surveys of the Social Weather Stations, a private research institution, found 71 percent of the nation and 86 percent of Manila City residents want the bill passed into law.
Urban poor group leader Fe Nicodemus reported that on Valentine's Day her group distributed 200,000 condoms while the church gave out rice. "Residents got the rice, then came to us" for the condoms, she said.
In a separate interview on Feb. 19, Archbishop Oscar Cruz, the church's national judicial vicar, said the church is exercising its role of reminding Catholics about right and wrong.
"The real problem of government officials is their futile wish for the bishops, priests and religious to act as if they know nothing, see nothing, say nothing even when said public officials engage in unethical and/or immoral plans, programs and projects," Cruz said.