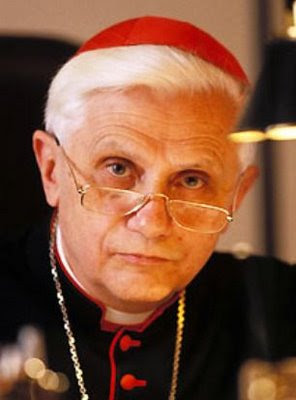 Clerical sexual abusers found that they could abuse with impunity while Cardinal Ratzinger's office 'investigated' their 'moral failings'. Oh yea, and they could also avoid any criminal prosecution.

I'd like to give a shout out to one of my frequent readers for the heads up on the above article. I have made a personal vow not to let myself get too terribly distracted from the issues which are endemic to the sexual abuse crisis. One of those issues is the direct culpability and hideous leadership of the Vatican and Pope Ratzinger in particular. Another is the unexamined idea of loyalty--loyalty to one's superiors and loyalty to the Church. Especially if this loyalty takes precedence over one's commitment to truly honor and live the Way of Jesus.
In an instructive synchronicity, here's another link to an article I came across today. In the Archdiocese of Santa Fe, Argentina it's deposed bishop was given an eight year prison sentence for sexual abuse of a minor seminarian on December 30th of this past year. It seems that in both Santa Fe Archdioceses, there were concurrent abuse investigations going on--in the mid nineties--and both resulted in the removal of the sitting Archbishop only because the local media wouldn't let it drop. The Vatican stonewalled in both cases, which it could, because it was first in the line of reporting. Maybe this is just one of the 'coincidences' mentioned in Marcia Hamilton's piece.
When loyalty to the Papacy and the Church is held as a higher priority than serving and healing the children of God, the smoke of Satan has truly entered the Vatican under the guise of good. What is Satan attacking through unaccountable clericalism? Santa Fe--that is, our Holy Faith. This is no synchronicity and no coincidence. It is a message the Vatican desperately needs to get.
Posted by colkoch at 9:44 AM