Loyal Roman Soldiers Upholding The Power Of The Empire 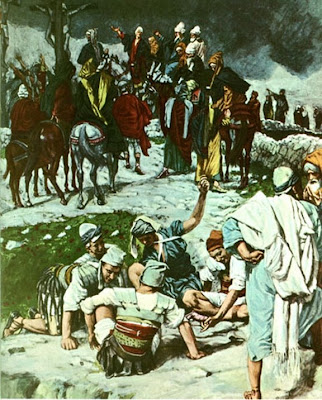 Other loyal Roman soldiers haggling over the spoils and ripping the seamless garment.

This has been an interesting couple of days for Catholicisim, In the US and at the Vatican it has had a whole lot more to do with the NY Times than it has Jesus Christ and Holy Week. After two days of castigating the Times for inaccurate reporting, basically on the testimony of one Fr. Brundage, there has been dead silence now that said Fr. Brundage has retracted his statements. The Old Grey Lady stands vindicated about the facts of their story on Fr. Murphy, if not their conclusions about Cardinal Ratzinger.
The more I've delved into the abuse crisis this week, the more it's becoming apparent that the over all strategy is to give ground on some issues, while desperately deflecting attention away from the priesthood and the authority structure itself. So we have the head of the German bishops, Archbishop Zollitsch, giving ground on the 'protect the Church from scandal' argument:
Clerics have neglected helping abuse victims by a "wrongly intended desire to protect the church's reputation," Archbishop Robert Zollitsch of Freiburg said.
I'm sure we will see more clerics line up behind this admission because it fails to mention anything about the excessive power held in the hands of clerics, or the theology of the priesthood, or a poorly developed theology of sexuality. Protecting mother church is a better excuse than the reality of abusing and re abusing children to protect clerical power.
We will continue to hear all kinds of wonderful references to the Dallas Charter and zero strike policies and absolutely nothing about the fact the Dallas Charter specifically excludes bishops from it's enforcement policies. We will be told it is mandatory and binding for all dioceses, when in fact that has never been tested or ruled on by the Vatican, which is why Bishop Bruskewitz refuses to implement the Dallas Charter in his diocese and gets away with it. The issue,of course, is whether a national synod has the authority to tell a given bishop what he will be forced to do in his own diocese. Bruskewitz seems to be betting the Vatican will reserve that authority to itself. So far he's been right.
The USCCB and Cardinal Levada desperately want us to believe that the Dallas Charter is being faithfully implemented and yet we know that Cardinal George, the head of the USCCB, did not faithfully implement the Dallas Charter, nor is he playing by the rules. Here's an interesting statement from the linked article which illustrates how carefully one must read diocesan statements:
Archdiocese spokesman Jim Dwyer said that George felt at the time of the review board's advice that he could not remove McCormack without firsthand information."Now we have the protocol in place to be more aggressive in possibly removing priests earlier in the process when we see there's an issue of safety," Dwyer said. "The cardinal has said we're going to do things differently in the future, but he's not going to step down."
Why insert the word 'possibly' if one intends a first strike policy, especially if 'we see there's an issue of safety'. Why not just be more aggressive period. Could it 'possibly' have something to do with a Cardinal being forced to act on the recommendation of mere lay professionals?
Can we trust this current Vatican, even under Benedict, to really reform and follow through on cleaning up the Church--on some sort of permanent basis? Well no we can't, because Ratzinger himself bailed on his desire to investigate Austrian Cardinal Groer and Fr. Maciel and the Legion of Christ. We have absolutely no certainty that the next pope won't be as obstructionist as the last pope and that all the underling "Cardinal Ratzinger's" won't trade in their personal disgust, shame, and integrity in favor of closing ranks and obeying. For the 'good' of the Church.
Catholics can not afford to be diverted by excuses which leave an ultimately unaccountable clerical culture in charge of the whole Catholic show. All that will accomplish is to insure that abuse of the faithful continues, that Catholics will be held hostage not to the principles of love that Jesus asked of us, but to the demands of a highly compartmentalized and protected class of men.
Men, who when it comes to the exercise of secular and clerical power, do not get Good Friday. The day their professed Savior rejected all forms of power in favor of the love and forgiveness He preached. The day He hung ignominiously and powerless from a secular Roman cross. An execution accomplished with the collusion of clerical power.
It angers me no end that any bishop would dare to imply the Church hangs on that cross because of publicity they generated themselves. No, their victims hang on that cross while they sit at the foot and haggle like the Roman soldiers they are over what's left of the spoils.