Reforming The Vatican? No, A New Evangelization For The Secular West 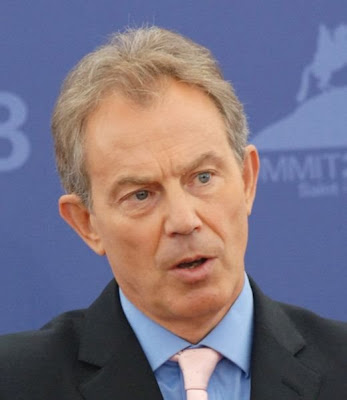 Recent convert Tony Blair was one of the keynote speakers at the 2009 Communion and Liberation meeting in Rimini, Italy. His appearance went over very poorly with more conservative pro life/pro family groups.

When I read this last night, coupled with yesterday's AP story in which Benedict stated the laity "must place absolute trust in their clergy, I was speechless. Again I asked myself: What planet is Benedict living on? Does he have any meaningful connection with current reality? Does he truly think the laity are both 'simple' and stupid? Does he not get that he and his fellow 'teachers' have thoroughly destroyed the trust level of most Catholics in the West and that includes a lot of conservative catholics? How in the world does he think pushing the agenda of yet another generally conservative Catholic group advocating obedience to the Papacy is going to help? Especially after the Legion fiasco.
I read TheraP's blog post yesterday about boots stuck in the mud, and laughed--on one level-- because when I went to parochial school we leased state of the art Greyhound buses and the public school kids hated us for our reclining seats and air conditioning. (Not that we made an issue of that or anything.) But on a more serious note, the question of "why am I doing this blogging thing hit home". It isn't a matter of resolving past issues with Catholicism. I've been beyond that for a couple of decades, but I couldn't come up with an expression for what I was feeling, until I read this conversation on Catholica Australia and saw this quote from the Gospel of Thomas:

Jesus said, 'The Father's kingdom is like a merchant who had a supply of merchandise and found a pearl. That merchant was prudent; he sold the merchandise and bought the single pearl for himself. So also with you, seek his treasure that is unfailing, that is enduring, where no moth comes to eat and no worm destroys.'

That more or less describes my path in Catholic Christianity. I had to let go of a lot of the Catholic merchandise before I could really buy the Great Pearl. The moths of inherent contradictions and the worms of corruption and deceit were actively destroying both the merchandise and my search for the Pearl. It was after I had worked through and sold off all the merchandise that I found the truth of the Pearl hiding under all of it.
Archbishop Fisicella would do well to meditate on this passage, reputedly said by Jesus, from a rejected Gospel. It's an important quote from a symbolic source. There is a ton of wisdom out there in the rejected Catholic landscape, but to integrate that wisdom calls for selling off of a lot of merchandise. This is the exact opposite of an attempt to repackage and resell the same merchandise to disenfranchised costumers. That approach didn't work for Detroit's auto industry and it won't work for the Vatican in an educated and skeptical West.
Posted by colkoch at 7:38 AM