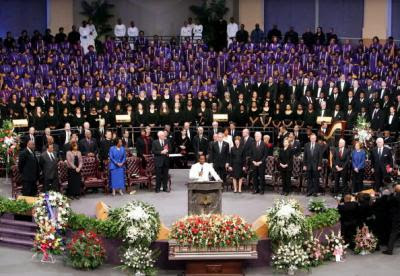 Rumor has it Bishop Long may be presiding at his own pastoral funeral this morning.

The following editorial is from the Black e-zine Root.  It contains a universal message about why deifying our pastors is the undoing of our children--especially deifying our male pastors.  When I read this the first time, in some part I couldn't help but substitute Catholic leadership and Catholic laity for Bishop Long and his congregation.  The following was edited for length.

If we learn nothing else from the biggest and messiest black mega-church scandal ever, it is that truth cannot be silenced, no matter how many refuse to speak it or conspire to hush it up. It will find a way to manifest. It does not need to be spoken to reveal itself. So as the story of Bishop Eddie Long swells from Facebook to CNN, engorged by our lust for fallen giants and monsters, let us not lose our heads. Let us learn the lessons that the legion and their leader willfully chose to ignore. (I have found it very disheartening to read comments from the congregants about Bishop Long that are identical in nature to the rationalized denials used by some Catholics in reference to Catholic leadership. And of course, there is very little compassion or sympathy for the victims.)

While it is a shock, it should be no surprise to anyone who watched. Long's potent combination of charisma, bling and prosperity gospel, in the tradition of Father Divine, helped him amass considerable wealth and celebrity status. Like several of his white counterparts, Long pandered to the anxieties and desires of his flock at New Birth Missionary Baptist Church with a potent blend of social conservatism, materialistic worship and anti-gay rhetoric. (Does this sound familiar?)

Not content to build the largest black congregation in the Southeast, Long sought currency with the political right by advocating for anti-gay marriage legislation through his infamous Reigniting the Legacy march in 2004. In doing so, Long parroted white right-wing misappropriation of Martin Luther King Jr. to deepen political wedges between blacks and the LGBT community. His minstrel antics have drawn stinging denunciations from the likes of Al Sharpton and respected theologians James Cone and the Rev. Irene Monroe. Besides a small demonstration, however, little local public outrage materialized........

For many young people, the reality is that they are sacrificed on the altar built for pastors we have deified. We must dismantle the cult of the clergy and other leadership frameworks that place male leaders above reproach. We must stop regarding our cowardice as loyalty and take the risks to support our young when they are victimized........

One who cannot face aspects of himself that he despises will train that animus on another whom he regards as his opposite. Did he sell out countless individuals in order to throw congregants off the scent of his own hunt, the exploitation of young men? Was there a point when, at first, a few and then many knew what was happening and said nothing? How long will we enable the abuse perpetrated in word and deed by our pastors? When will we dare to speak the ugly, inconvenient truth even when we are afraid? (How long will we place the responsibility for our own salvation, our own actions, and our own thoughts on the shoulders of someone else--and tell our children to do the same?)


This story of this sullied bishop serves overdue notice to Christians across the nation who have bought and sold snake oil presented as holy water. It is a foreclosure warning to every black male pastor who deems the church his castle, and the women, gays and young who build it as no more than chattel to serve his appetites. It is a subpoena, a calling to account for all black men who endorse patriarchy as the most legitimate form of power in our communities. It is a stained diary page brought to light. It is truth. Amen.  (This isn't just a black male problem by any means.)

As I write this Bishop Long is responding to the four law suits currently pending.  He is doing so in front of his flock, from the altar they provided.  In that flock will be young gay men who will be attempting to deal with the fact that their Bishop made a huge part of his reputation and wealth at their expense, while simultaneously using others of them for his own pleasure.  I imagine they will be more than a little confused and angry.  It's hard to reconcile the God of love with the actions of the pastors of lust.  It's even harder when the two ideas have been purposely conflated in this whole business of deifying our pastors.

Also in that flock will be Bishop Long's wife and family.  How does one deal with adultery and betrayal on this scale?  I think we overlook the fact that Jesus never talked about sex.  He talked about adultery.  At it's core adultery is about the betrayal of a vow made before God about fidelity to another human being.  It's a vow about the sacred character of a relationship.  It is a person taking their own soul in their own cupped hands and making a commitment. Betray the vow, open the hands, and where does one begin to find one's soul again? How does anyone trust that person again on any real meaningful level.  The truth is people will trust the betrayer if they can't trust or have never been taught to trust their own inner guidance.

This phenomenon almost guarantees Bishop Long, like Ted Haggard, will be back.  It's the same kind of thing Pope Benedict and the Vatican are ultimately counting on to keep Catholicism's clerical culture in tact and unreformed.  It's up to us to forgive and forget because our individual salvation and spiritual journey demands we do so.  So we're told over and over and over again.  In the meantime we give tacit license to continue being abused and used.  We are complicit not just in our own abuse, but worse than that, the abuse of other innocents.  And for this we believe we will enter the Kingdom.

The question is, whose kingdom?  That of the pastor or bishop or pope whose palaces and kingdoms we've bought and paid for.  Or the Kingdom of Jesus who told Satan to shove this same idea of kingship where the sun doesn't shine?  How many more failed pastors and clerics must be exposed before we all stop confusing charisma, clerical bling, and targeted hate for the Kingdom of Jesus?

Update:  In this video of this morning's service, Bishop Long engages in mental reservation, dodges real answers, and defers to the advice of his attorneys.  He vows to fight on and find justice in the court of law.  This quote is as close as he got to dealing with the issue of guilt or innocence:

"There have been allegations and attacks made on me. I have never in my life portrayed myself as a perfect man. But I am NOT the man that's being portrayed on the television. That's not me."

OK he's not the man portrayed on television, but that doesn't say anthing about the man accused in the law suits. True to form there was a section of his sermon in which he stated his church would continue with it's mission,--and shock--he specifically stated the mission in the political arena as this was an election season--which makes me wonder for whom this sermon and it's message was really intended.
Posted by colkoch at 7:48 AM