Is There Really No Place For Reason Informing Faith? 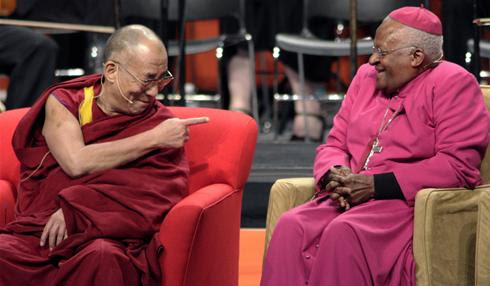 For these two spiritual leaders it's reasonable to have Faith informed by Compassion
I agree with Pope Benedict's insistence that faith has a part to play in secular society, or to put it in his terms, that faith can inform reason.  Where I run into real problems is his selective application of the reverse of this proposition,  that of faith being informed by reason.  In that part of the faith/reason equation, secular humanists, scientists,  and even atheists do have an important part to play. Not all tenants and dogmas of religious systems are reasonable in a secular or scientific sense and some of them cause all kinds of problems for secular states.

Egypt is currently experiencing this kind of situation over remarks made by Fr. Bishoy of the Egyptian Coptic church.  Fr. Bishoy questioned whether some remarks attributed to the Prophet Mohammad in the Quran, ones pertaining to Christians, were really stated by the Prophet.  He suggested they could be later 'add ins'.  This concept of tinkering with authoritative texts is hardly unheard of in Christian biblical scholarship and Fr. Bishoy may not truly have thought he was stating anything revolutionary.  If so he was mistaken.  The Coptic Church and the secular Egyptian government are now under serious attack by Islamic literalists.

In the West sex, gender, and the family are the big battle grounds between faith systems and secularism.  One of the comments I read in reference to the Bishop Eddie Long mess was written by a Black sociologist who stated that it always amazed him that Black believers could go on and on about adhering to the sexual letter of the law in the bible as it pertained to homosexuals, while overlooking the fact their own oppression from slavery was justified by whites claiming biblical authority for slavery.  There are, he wrote, a great many more verses in the Bible justifying slavery than there is condemning homosexuality.  Given some of the responses he received, for literalists this kind of reasonable question is an attack on the veracity of the Bible prompted by Satan.  They were not amused by his argument and apparently blind to it's reasonableness.

Then there was this from Rowan Williams the Archbishop of Canterbury in an article on gay Anglican bishops:

“There’s no problem about a gay person who’s a bishop. It’s about the fact that there are traditionally, historically, standards that the clergy are expected to observe,” he said.


When asked what was wrong with a gay bishop having a partner, the Archbishop said the scriptural and traditional approach “doesn’t give much ground for being positive about it”.

The scriptural and traditional approach didn't give much ground for being positive about outlawing the slave trade either, but secular England did away with slavery anyway.--- and not with the help of his predecessor of the time, nor the one sitting on the Throne of Peter.

The funny thing is that faith did play a huge part in changing attitudes towards slavery and pushing human rights forward.  It was the inspired faith of believers who heard a message about moving beyond literal interpretations and seeing the over all trend in God's relationship with humanity.  They saw a Jesus who opened up His kingdom to everyone.  They saw a new covenant based on universal and timeless attitudes of love, compassion, humility and inclusion.  They did not see a covenant based on the primacy of right behavior or some form of god approved class distinction which put heterosexual white christian males on the top of God's pyramid.  For these Christians, God didn't have a pyramid of people.  God just had people.  God cared for us all the same.  That's the kind of  faith interacting with reason that has historically propelled secular society forward on a fairer and more inclusive path.

To get to that universal inclusive understanding one has to give permission for reason to inform their initial faith formation, and that threatens traditional authority.  I suspect that's the problem African Anglican clergy have with the West and Benedict has with secular relativism.  It's really not about homosexuality and relativism, it's about undermining the strength of traditional and exclusively male authority.  For a lot of folks in the West there's nothing unreasonable about expecting change in these authoritarian religious structures. More than that, they see no compelling biblical case for the maintenance of a uni gender authoritarian structure with it's attendant male centered world view. It's neither reasonable nor particularly faith inspiring because it is no longer how the world works.

If the world and humanity truly are in some measure a reflection of God's image, then it just seems reasonable to think that God doesn't work from a uni gender uni sexual world view.  I think it's also reasonable to wonder why the Catholic teaching authority does insist God desires such a male unisex world (except for the actual sex part).  The further the Church moves from Vatican II the less it seems to want a Faith informed by reason.  I have a hard time believing that is truly about the Will of God. It seems more reasonable to attribute that thinking to the will of the men who benefit from the thinking.
Posted by colkoch at 11:59 AM