About Those Two New American Cardinals 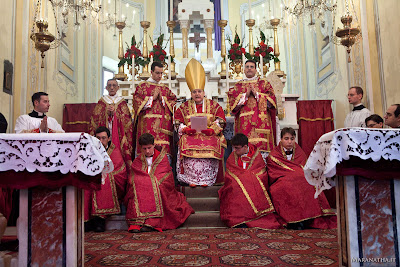 Guess which new American Cardinal is in the center of all this lace.

It's funny how even though you know beyond a shadow of a doubt something is going to happen, it can still be so disappointing and generate so much internal anger.  So it was with me when the announcement that Donald Wuerl and Raymond Burke are the new US cardinal designates.  I will admit I have laughed out loud at commentary, such as this from John Allen, which describe Wuerl as centrist.  The truth is Wuerl has been what ever Wuerl has needed to be to get his red hat. Centrist? No, narcissist is closer.   Since I found myself surprisingly incapable of writing a coherent post about these latest 'jewels' in the crown of US Catholicism, I offer excerpts from the following reflection by Mary E. Hunt as posted on Religion Dispatches.  Mary writes about one of the common denominators which seems to assure a red hat for American prelates, and that's the capacity to publicly stick a Vatican knife in the back of another Catholic.

Pope Benedict XVI named 24 new cardinals, including two Americans, at the end of yesterday’s weekly Wednesday audience: Archbishop Donald W. Wuerl of Washington DC and Raymond L. Burke, formerly of St. Louis, and now Prefect of the Apostolic Signatura, the Supreme Court of the Vatican. They are among 20 of the 24 who are young enough—i.e. under 80—to vote for the next Pope.

In a radio interview on the day of the announcement Cardinal-designate Donald Wuerl was asked what one has to do to become a cardinal. He finessed the question by saying, with humility that would choke a horse, that the honor was really for the city of Washington DC, the nation’s capital, and not so much for him personally. Since the rest of us in DC won’t actually have any cause to run out and pick up a new red hat, I would have preferred that he answer the question honestly. The honest answer, to all appearances, is that to become a cardinal you have to do in at least one fellow Catholic, at the very least. I realize that sounds more like gaining membership in a gang or the mob than being named to a high-ranking religious post, but it’s the most apt analogy I can find for how the Roman Catholic system seems to work.

For all the good Wuerl may have done in his lifetime, it is hard to forget at this time when his power in the Roman Catholic Church has just increased geometrically (he will be one of the 120 or so electors of the next Pope) how he earned his spurs. Ordained in 1966 for the Diocese of Pittsburgh his lack of significant parish experience didn’t prevent him from being named secretary to the local bishop, John Wright. As secretary, he followed Wright to Rome when Wright became a cardinal and was appointed as the Prefect of the Congregation for the Clergy. When Wright died, Wuerl went back to his home diocese in Pittsburgh to head the local seminary in 1982. But by 1985 he was destined for a higher calling.

Meanwhile, Archbishop Raymond Hunthausen of Seattle was a popular and liberal cleric who ran afoul of Joseph Cardinal Ratzinger, then head of the Congregation for the Doctrine of the Faith. Much like the US nuns who are being investigated now, Hunthausen was the subject of an Apostolic Visitation because he was supportive of civil and religious rights for women and LGBTQ people. The result was that Wuerl was named as his auxiliary bishop with final decision-making power over liturgy, ministry to LGBTQ people, and health care—areas that Archbishop Hunthausen was seen by the Vatican to be soft on. This was a most unusual arrangement, simply not done in a system where each bishop handles his own geographic area. It was an obvious affront to Hunthausen, a kind of ecclesial punishment. (Archbishop Hunthausen had also run a foul of Ronnie Reagan and by this time the relationship between JPII and right wing money in the US was well established.  That money wanted no interference from Catholic bishops about Ronnie's weapons programs.)

Outcry from people in the Archdiocese of Seattle, including clergy and religious, was so fierce that the Vatican eventually backed down and sent Wuerl packing to Pittsburgh a short time later. But the damage was done. Hunthausen had been insulted and his power usurped. Wuerl was the one who did the Vatican’s bidding. The red hat took some years, but now he’s got it, ostensibly as a reward for showing loyalty at Hunthausen’s expense.....

Raymond Burke’s track to the red hat includes a similar incident. When he wasn’t busy condemning President Obama and other pro-choice politicians, including the late-Senator Edward Kennedy to whom he would have denied a Catholic funeral, he was condemning progressive nuns. But perhaps it was the case of Sister of Charity Louise Lears that gave him the boost he needed.

Louise Lears, who has a Ph.D. in medical ethics, served on the pastoral team of Saint Cronan Parish and was an adjunct professor at St. Louis University. Her support for, and presence at, the ordination of two members of the Roman Catholic Women Priests group in 2007 that got Burke’s Irish up. The ceremony was held not in the local cathedral but in a synagogue whose rabbi was a strong supporter of her sisters’ ministry.

Archbishop Burke, with scant attention to dialogue and little regard for her well-being, placed Louise Lears under interdict, prohibiting her from working in diocesan venues or receiving the Catholic sacraments. In fact, he issued the decree the day before he left St. Louis for greener pastures in Rome. He now heads the court that would be one of the few ecclesial venues for appealing Sister Lears’ case. So much for due process.  (Burke also brought lots of right wing connections and money with him to the 'Emerald City'.)

Mary concludes her piece by noting another thing that irritated me.  The fact that two thirds of these designates are from Europe and North America while more than two thirds of Catholic laity are in the South.  In my view, Benedict's papacy has been far more about preserving the traditional European cultural flavor of the Roman Catholicism than it has anything else.  Why else keep promoting culturally conservative white men of European descent?  Because of their superior holiness I guess.......

Forty current Cardinals have the vast majority of their clerical experience working in the Vatican and one assumes ministering to the eight hundred citizens of Vatican City, most of whom (72%) are clergy.  There are 3000 Italian citizens who work in the Vatican City States giving a clergy to lay ratio of 6-1 and a Cardinal to lay ratio of about 80-1. The world wide Catholic ratio of laity to priests is slightly over 13,000 to one.  This describes an incredible level of centralization of authority which doesn't include women or their children.  It is it's own little reality and that's why having sole authority over these kinds of appointments results in the Wuerl's and Burke's of the Catholic world.

There was one other story that surfaced in the past week which clearly illustrates the dysfunction in the overly centralized authority of the Vatican.  It seems that the 2008 ICEL translation of the Roman Missal that was finally approved by all the English bishops conferences and approved by Benedict XVI has subsequently had an estimated 10, 000 corrections, additions, and deletions foisted on it by nameless Vatican bureaucrats.  Whatever missal Benedict was seen approving it's no longer what he or any national bishops conference approved.  So much for subsidiarity and the ecclesiastical authority of national bishops conferences.

I have no sympathy what so ever for any current bishop. They have no one to blame but themselves for the Vatican penchant of trampling all over their canonical authority.  Donald Wuerl's appointment to Seattle should have raised major red flags  but it wasn't the USCCB who raised their voices about this blatant assault on Hunthausen's authority in his own diocese.  Fifteen years later Donald Wuerl is a cardinal and the USCCB has no authority.  Nice job boys.