Blame The Boomers And Their Contracepting Ways For Economic Collapse 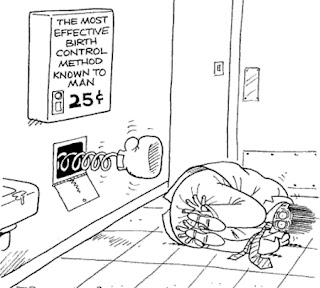 I sort of suspect this form of birth control wouldn't pass the doctrinal test either--well...maybe for male prostitutes
I've often wondered if the pro life movement isn't really an economic movement and not particularly a pro life movement.  Articles like the following seem to support my musings, but this article also seems to be another salvo in what is becoming a generational divide in the Church between youthful pro life JPII conservatives and aging grey hairs of the Spirit of Vatican II crowd---who can't croak fast enough.

The president of a pro-life organization in Argentina is warning that current policies promoting birth control will prevent the country from maintaining a 2.1 annual replacement index.

Roberto Castellano of Pro-Vida said on Feb. 7 the country’s aging population will have a negative impact on Argentina’s economy.

Castellano said that the country's 2010 census data indicates that “the birth control or demographic discouragement policy” that promotes contraception, abortion, the undermining of marriage and the absence of pro-family programs appears to be working.

He warned that the boom in the number of senior citizens will impact the economy and that not enough young people will be paying into the Social Security system to support retirees. This could also result in less foreign investment because of Argentina’s “slim population and consequently small domestic market.”

“Thus Argentina would be relegated to the role of simply providing raw materials for more developed economies, with little or no population to ensure that the surplus of its exports goes towards addressing the external debt,” he said.

Castellano also criticized the adoption of “foreign colonial ideologies” disguised as “sexual rights and reproductive health,” which have “belittled and degraded Argentina.

This is a similar argument heard in the States.  The idea that the aging 'boomer' generation is mostly a pending disaster for the economy and a burden for it's children.  Those would be the very children we didn't have in enough numbers in our selfish  pursuit of free sex, drugs, rock and roll, and the Spirit of Vatican II. I feel seriously like I missed a whole bunch of fun stuff in my thirty some years of chasing the American Dream.  It now looks like I will spend the next twenty years getting to engage in the same pursuit.  That's assuming the mental health center I currently work for doesn't go belly up in the next two weeks like management says could happen.  Thankfully I have missed the current lay offs, but that's only because the program I work for keeps the state hospital from having to continue to put beds in the hallways due to over crowding.  Tough times in the good ole US of A.

And maybe it's the reality of those tough economic times that fuel the kind of generational blaming that's the hallmark of the above article.  I have to admit I fail to see the logic in calls for more children in a world that already has some one billion of them living at death's door from poverty and lack of food and water.  Perhaps it would be more pro life of Argentina's pro life crowd to bring in more of God's Central American, African, or Haitian poor children rather than castigating it's own people for not birthing enough Argentinians or blaming the older generations for potentially destroying their economy.

It's the same thing we see in the US where our vocal conservative pro life Catholics are using the same sort of arguments in the abortion/birth control/gay marriage/pro family culture wars while also advocating for the removal of millions of productive, if illegal, immigrants.  There's a sort of cynical side of me that wonders if we would see the same sort of concern if those millions of illegals were coming from Canada or Australia.

Every time I see this kind of argumentation coming from a so called 'pro life' leader it only confirms for me that the issue isn't life at all.  It's using the pro life cause to support old style failed economic theories.  The kind that says if we keep an endless supply of consumers in the pipe line we will create an endless supply of wealth.  Trouble is sex, even the best God sanctioned procreative kind, doesn't create more resources for humans, just more humans to use up finite resources.  Somehow I can't quite shake the feeling that God expects us to figure that one out, even if the so called God fearing head honchos of Walmart for example, hope we don't.
Posted by colkoch at 5:05 AM