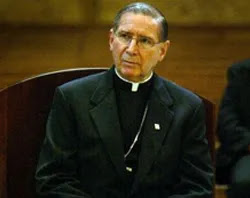 Cardinal Mahoney at a previous trial where he did not commit perjury.  He just 'forgot'.  He did not wear lace either.


It is not outlandish to ask if Cardinal Roger Mahony of Los Angeles is a criminal for “knowingly endangering the children he was supposed to defend.” There is ample evidence already in the public forum that Mahony has known of priests who abused minors, reassigned them and allowed them to minister only to abuse other minors. He has not informed parishioners or even parish staffs, that the priests he was assigning had a record of abuse. Mahony who has a Masters in Social Work did not report known priest abusers to social services. All of this vast evidence is recorded in countless depositions on record from litigation [1] of abuse and Mahony’s own testimony under oath.[2]
Judge Jim Byrne who was touted by the cardinal as a poster boy for the integrity of the sexual abuse review board said in deposition that in all the years he served on the Board he “never thought” of helping the victims.
Lawyer, Larry Drivon, who has litigated many California cases of clergy abuse accused Mahony of perjury after letters he signed when he was bishop of Stockton, were produced in his 2004 deposition that showed—black on white—he had clear knowledge of events he denied under oath in deposition and on the witness stand in the 1998 trial of Fr. Oliver O’Grady.[3]  I attended the 2004 deposition of Mahony. I know the history of the O’Grady trial. I saw Mahony’s letters. As a layperson I would say that I witnessed the cardinal lying. His lawyer claimed, as did the cardinal that “he forgot.”
Los Angeles Grand Juries have been impaneled over the last nine years to determine the real picture of abusing priests in the Archdiocese of Los Angeles in focus. Their problem is not the lack of evidence, but the monumental impediments the cardinal has sponsored to obstruct investigation and the release of documents needed to pinpoint facts of the cardinal’s knowledge and involvement in complicity and obstruction.
He has claimed that communications between him and his priests have a special privilege, not unlike that of confessional secrets. The Supreme Court could not swallow that. His obstructionism seems unbounded.
Currently he claims that he is a member of the therapeutic team treating priest abusers and therefore documents involving him enjoy a privilege of medical confidentiality. (How creative is this? This  Roger is truly the most artful of the LA Dodgers)
It has not yet been revealed how many millions the cardinal has spent in pursuing these facetious claims. But he has employed for his defense the lawyers and public relation firms used by Enron and the Tobacco industry. Birds of a feather. Truth and transparency be damned. Documents will show that Mahony is a crook.
[1] Depositions by Bishop Curry and Judge Byrne are illustrative of how priests were assigned and the oversight board operated.
[2] Mahony depositions, January 25, 2010; November 23, 2004; also Cf. Mahony trial testimony Fresno, CA March 17, 2009.
[3] Don Lattin. December 11, 2004. The San Francisco Chronicle.
****************************************************
Here's some facts and figures.  The cost of abuse settlement for the LA Archdiocese and subordinate bishops is well over 1 billion dollars. The cost of the new LA cathedral, Our Lady of the Angels, was 189.7 million.  I'm sure Cardinal Mahony intended the cathedral to be the lasting monument celebrating his legacy.  Sorry, ain't happenin'.
Why am I not surprised that Mahony has attorneys from Enron and Big Tobacco on retainer.  Could it be because he can't decide if he's going to get hit with criminal malfeasance or obstruction of  justice.  He'd probably have Johnny Cochran  on retainer if the man was still available.  Unfortunately I don't see where there is any trick defense available to Mahony if he really ever is brought up on criminal charges.  He's using them all up avoiding trials and depositions.  He's a member of their treatment team? Wow.
The sentence that really wowed me was the one attributed to Judge Byrn where he says the entire time he was on the clergy sexual review board he never once thought about the victims.  I don't think there's a better description of a criminal corporate mentality, and that in the end will be Mahony's legacy as a Catholic Cardinal and Archbishop.  He ran a criminal corporation and the really sad thing is he was hardly alone.
Posted by colkoch at 5:30 AM