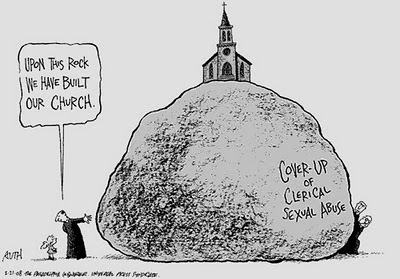 Monsignor William Lynn, former head of the Archdiocese of Philadelphia's Office for Clergy, has been charged for allegedly failing to protect children from sexual abuse by priests, District Attorney Seth Williams announced today.

Two felony counts of endangering the welfare of children were lodged against Lynn following a grand jury investigation, Williams said at a news conference.  (This is a big step in accountability, but Lynn didn't operate in a vacuum.  I wonder if indicting Cardinals was too big a step or if Lynn did too good a job protecting his bosses.)

Williams also announced the Revs. Charles Engelhardt, 64, and Edward Avery, 68, and Bernard Shero, 47, a former 6th grade teacher at St. Jerome's School in Northeast Philadelphia, had been charged with raping and sexually assaulting the same boy in the parish between 1998, when he was 10 years old, and 2000.

Another priest, the Rev James Brennan, 47, is charged with raping and sexually assaulting a 14-year-old boy in 1996.

Williams said Lynn, who was the Archdiocese's Secretary of the Clergy from 1992 to 2004, "supervised two of the abusers . . . knew they were dangerous and chose to expose them to new victims."

Since 2004 Lynn has served as pastor of St. Joseph's Church in Downingtown, a parish of nearly 4,000 families.

As head of the clergy office, Lynn oversaw all priest personnel issues, which included advising Cardinal Anthony Bevilacqua and his successor, Cardinal Justin Rigali, on the assignment of priests; interviewing persons who reported sexual abuse by a priests; and overseeing the treatment of clergy known to have abused children.

In a message to church deacons, Rigali said he could not comment directly on the grand jury report because he had not yet received it.

But, he added: "I know the release of this report will be painful and my deep concern is for all of those who have been abused. I urge all the faithful of the Archdiocese to pray for, to extend every concern for and remain open to understanding the experience of the victims. It is in that spirit that we reflect upon the grand jury's actions and the recommendations they make."......

.........Today's charges come nearly 5 1/2 years after a Philadelphia grand jury excoriated the Archdiocese of Philadelphia for an "immoral cover-up" of its sexually abusive clergy, and for creating what it said was a climate that exposed hundreds of children to assault. (All unfortunately too true, and not limited to Philadelphia.)

Although the 2005 report directed much of its ire at Bevilacqua, the Roman Catholic archbishop from 1988 to 2003, it mentioned Lynn 652 times - more than any other member of the archdiocesan hierarchy, including Bevilacqua.

"Secretary for Clergy Lynn . . . treated victims as potential plaintiffs. Not only did they not receive apologies acknowledging their abuse, but many were bullied, intimidated, lied to, even investigated themselves," the report said.

It also accused Lynn of repeatedly failing to investigate abuse charges, reassigning abusive priests, and concealing their crimes from civil authorities and the Catholic laity.

"It became apparent to the Grand Jurors that Msgr. Lynn was handling the cases precisely as his boss [Bevilacqua] wished," it said. (I have no trouble believing that Msgr Lynn was handling these cases the way Bevilaqua wished, but the fact is Lynn should have refused his lord and master for the sake of his Lord and Master.  Instead Lynn reversed the two.)

The assistant district attorneys who wrote the scathing, 468-page report in 2005 said their office had sought ways to bring criminal charges against several archdiocesan leaders but were frustrated by Pennsylvania's "inadequate" state laws, such as the statute of limitations.

An indictment is one thing, conviction in a jury trial is another.  In any event I'm sure Cardinal Rigali is not sleeping well tonight.  He's undoubtedly suffering from visions of horrific publicity dancing through his head.  These arrests are not just about Msgr Lynn.  There are four other priests indicted for rape, and those charges are very serious felonies and this could go on way past the time Rigali might wish it stop.  I'm sure the victims of his priests 'ministrations' felt the same way.

It's hard to believe it's taken nine years since the clerical sexual abuse scandal first erupted in Boston for any chancellery official to be held criminally accountable for their decisions.  It might have happened sooner if Cardinal Law had not been given sanctuary in Rome, but I guess we'll never know.  Better late than never, but I can't shake the feeling that the Vatican will never understand just how much rage and anger this has generated until a bishop or cardinal is in hand cuffs.  Maybe at that point the Vatican will begin to take clerical sexual abuse as seriously as it needs to be taken and stop passing off their own accountability for decisions they instigated with their own orders.

Lately when Pope Benedict has been speaking about the importance of religious freedom, I can't help but wonder what kind of religious freedom he really means.  Is it the kind of freedom in which every day folks are able to worship God in their own way, or is it the kind of freedom from secular accountability the Vatican felt it was entitled to when it issued a series of letters 'advising' their bishops not to turn criminal priests over to secular authorities.  Religious freedom can not contain both propositions because then it isn't religious freedom, it's ecclesiastical tyranny.  The original Philadelphia Grand Jury report uncovered a lot of ecclesiastical tyranny directed at abuse victims, their families, and attorneys.  SNAP released the following response to today's arrests:

Statement by Barbara Dorris of St. Louis, Outreach Director of SNAP, the Survivors Network of those Abused by Priests (314 862 7688 home, 314 503 0003 cell, SNAPdorris@gmail.com)
This might be the first time ever that a high-ranking individual Catholic official has been specifically charged with recklessly endangering children.

This news may mean that finally one of the hundreds of complicit Catholic officials who have hidden or are hiding clergy sex crimes might be brought to justice.

Our hearts ache for these two victims who, along with hundreds of other Philly area boys and girls, were betrayed twice – first by predatory Catholic priests and employees and later by Msgr. Lynn.
We hope the actions of the Philadelphia DA will cause prosecutors across the US to examine their consciences and work harder to file similar charges against others in the Catholic hierarchy who continue to put the reputations of church officials ahead of the safety of innocent children.

Now is not the time to be complacent. There’s no guarantee that these charges will stick. Often, accused priests get top notch lawyers, seem likeable, exploit technicalities and evade punishment. So it’s crucial that others with suspicions or knowledge contact law enforcement right away.


For those readers who are interested, the following link is to the original Philadelphia Grand Jury report. http://www.philadelphiadistrictattorney.com/images/Grand_Jury_Report.pdf


It's also worth checking out this link from yesterday about a priest convicted of the repeated rape of two altar boys in Massachusetts.  In his defense of the priest, his attorney accused the victims of inventifactng and being stooges for SNAP:


"Defense attorney Michael O. Jennings suggested throughout the five-day trial that the victims were making up the stories and were encouraged to seek revenge by the support group Survivors Network of those Abused by Priests (SNAP).
''As a juror you just have to use your common sense,'' the female juror said. ''Would all these men get on that stand and testify in embarrassing detail about all that stuff and make it up?''
I've worked with victims of sexual abuse and have some idea of how difficult it is for them to relive their abuse publically on the stand with their abuser in the courtroom.  Although I recognize defendants are entitled to a defense, this kind of thing makes me very angry.  Consequently I have great admiration for the members of SNAP who are all victims themselves.  May they continue to bring justice to victims and support to those who can't get justice because of statute of limitation issues.