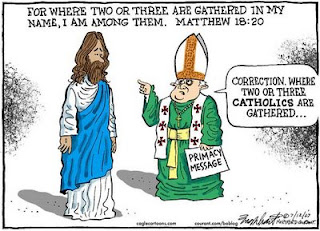 I've been thinking lately about the fallacies of the clerical caste system and it's relationship with the laity. In Paul's letter to the Galatians he makes the following point:
"Before faith came, we were held in custody under law, confined for the faith that was to be revealed.
Consequently, the law was our disciplinarian for Christ, that we might be justified by faith.
But now that faith has come, we are no longer under a disciplinarian.
For through faith you are all children of God in Christ Jesus. For all of you who were baptized into Christ have clothed yourselves with Christ.

The relationship between the clerical caste and the laity is based in separating male from female, ordained from laity, and demands slavish obedience rather than respecting free choice. It mandates a Catholic identity based on law observance rather than life in Christ. In short we are not one in Christ Jesus, we are two distinct classes, one sacred and one profane, one possessing truth and one transgressing truths, one spiritually dominant and one spiritually dependent.
The magisterium continues to promote this class distinction principally through the notions of Apostolic succession and Papal infallibility. The desperation to maintain this veneer of ordained sacred supremacy can be seen in the world wide unified response of secrecy and cover up with regards to clerical sexual abuse.
To me it is somewhat mind boggling that the Institutional Church has not been prosecuted as a criminal pedophile cartel, and this itself is probably indicative of just how ingrained obeisance to the Catholic hierarchy is in the West and the former colonies of the West. In the case of Interpol, this refusal to prosecute the Roman Catholic Church directly contradicts it's mission statement with regards to crimes against children. One cannot look at the response of the Institutional Church to pedophile priests in the last 70 or so years and not see a world wide criminal conspiracy based in secrecy and premeditated cover up orchestrated directly from the Vatican. The existence of the document Crimens Sollicitationes is all the evidence one needs, and it's most recent copy was issued by the hand of Cardinal Ratzinger. Any yet, the Institutional Church is untouched by secular criminal authorities. La Cosa Nostra must be green with jealousy.
Rosemary Ruether touches on these issues in her book Catholic Does Not Equal The Vatican.
She has the following to say about the notion of Papal infallibility: "A church that believes itself infallible in the pronouncements of it's monarchical ruler is a church that has encapsulated itself in its own apostasy and made that apostasy irredeemable. The mistaken claim of papal infallibility was imposed at a particularly bad moment in late-ninetheenth-century Italian Catholic history. In my view as a theologian, every other sin is forgivable except this sin of claiming to be infallible, because it is a sin against the Holy Spirit......The error of infallibility fixates all other errors, and to repent of it is also to liberate ourselves to be human, knowing ourselves to be finite, fallible, and able to see only in part, not absolutely or with final certainty. Knowing our fallibility liberates us to be Christian, to live by faith, repentance, and the grace of transformation, gifts of the Spirit without which we cannot be in authentic continuity with the new life in Christ and in authentic relationship with each other."
This notion of authentic relationship is for me, one of the primary concepts taught by Jesus. It's a concept I first came to really understand not through the Church, but through the writings of Abraham Maslow and Carl Rogers. Authentic relationships are grounded in the perceived equality between the participants. They also need grounding in an authentic relationship amongst the various aspects of ourselves. Not only must we see the life of Christ in others, we must see it in ourselves. As Paul writes, the authentic relationship, or authentic life in Christ, does not include arbitrary culturally defined subclasses like male to female, Jew to gentile, slave to master, or within ourselves, super ego to id, parent to child, or addiction over self autonomy.
All of these classes and distinctions must be exposed to the grace of transformation and the Gifts of the Spirit. This applies most especially to the Institutional Church and is most evidenced by the continuing pedophile cover up.
I've spent many hours in conversations with Native American spiritual leaders discussing the state of their respective reservation cultures. Addiction and child sexual abuse are escalating problems and to a person, these elders see these trends as evidence of a profound soul disconnection-sickness- amongst their people. I don't remember attending a sweat ceremony in which prayers weren't offered for the spiritual restoration of their people.
The Catholic clerical culture is facing the same soul sicknesses of addiction and child sexual abuse, but unlike Native elders, our clerical elders are wedded to a notion that directly prevents them from seeking the transformative restoration my Native friends are free to seek. That notion is Papal infallibility. This is not just a blasphemous sin against the action of the Holy Spirit it is also a vicious circular delusion which precludes any healing. Until more Bishops like Geofrey Robinsion and Tom Gumbleton can come foreward and question the delusion, real healing for institutional Catholicism is unlikely.
The laity can raise our voices all we want, but the sad thing is this clerical delusion does not allow for them to be heard. This is why it is imperative that more bishops speak out about the flaws in this system. Part of the delusion of the system is that bishops are more or less exempt from the inbuilt canonical expulsions with in the system. They can be and are, marginalized and ostracized, but that very process indicates their voices are being heard. They are the keys to unlocking the delusion and reopening the doors to the transformative action of the Spirit. I pray that more bishops continue to come forward, that those who are still genuinely open to the transformative action of the Spirit will not let themselves be silenced through fear or shouted down by the clerical fear mongers. That in the end the love they feel for the Church and the People of God will win out over the fear of Vatican power. I have hope that as more of them reach the age of retirement and the power of the delusion is seen for illusion, that more of them will finally speak out----but then maybe I'm delusional.