Forwarding An Email To The Blogosphere 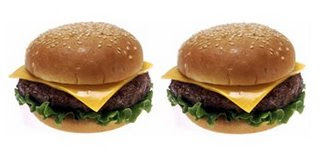 Same Sex Marriage as a Bacon-Double Cheeseburger.
Many Americans will not eat pork. Many Americans site biblical injunctions as their reasoning for not eating pork. And, many Americans will not eat pork for other religious or health reasons as well.
Nonetheless, in America the sale of bacon is still legal.
Similarly, there are Americans who interpret the biblical prohibition against boiling a kid in its mother's milk as meaning that they should not consume milk and meat in the same meal. But it is still legal for Americans who enjoy milkshakes with their cheeseburgers to do so..
The Bible is not and must not be the basis upon which laws of this country are made. The basis of the laws of this country are to be found in the Constitution and the Bill of Rights, as well as the hearts of our elected and appointed representatives.
Why shouldn't we use the Bible as a basis for our laws? Because our society is thousands of years more complex than that of Biblical days. Because the Bible tolerates slavery, the slaying of disobedient children, and ownership of women. Moreover, countries in which religious doctrine is used as the basis of law have been governments that the United States of America has historically opposed.
Consequently, any citation of the Bible with regard to the civil law of marriage especially with regard to same-sex marriage, is moot.
Simply put: much like those who believe that God doesn't want them to eat dairy and meat simultaneously abstain from eating bacon-double cheeseburgers, if you disapprove of homosexual unions, don't enter into one.
With love,
Rabbi Brian

That's the problem with secular democratic societies. They have to take into consideration the thoughts and feelings of everyone. In order not to step on one group of people they need to emphasise free choice and free will. It's up to those who disagree with gay marriage not to enter into one. Believe it or not, there are gays out there who do not believe in gay marriage and won't enter into one. And then there are hundreds of thousands of straights who do believe in traditional marriage and enter into those vows and then break them. Hence our divorce statistics. The moral of the story: Marriage is about far more than sexual acts, and even though well meaning people are making real commitments in the present moment, the future still holds many situations in which the vowers are not prepared and the vows don't hold.
Gay marriage is coming. The Church can fight this in every democracy in the world but they will still lose. They can not expect anyone to believe gay marriage adversely affects straight marriage, when straight marriage has failed on it's own for decades. I"ll take Rabbi Brian one step further. If you can't seriously commit to traditional marriage--of any sort--than don't do it, and please, don't have children. They pay a big price. I know this from personal experience.
Posted by colkoch at 6:01 PM