Pope Benedict Sums Up His Trip To The Middle East 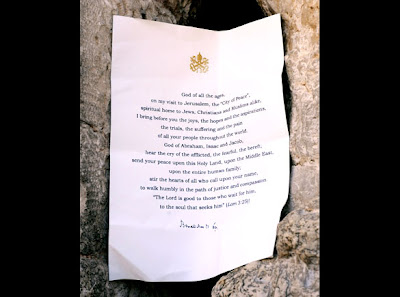 TEL AVIV 15 MAY 2009
Mr President,Mr Prime Minister,Your Excellencies, Ladies and Gentlemen,
As I prepare to return to Rome, may I share with you some of the powerful impressions that my pilgrimage to the Holy Land has left with me. I had fruitful discussions with the civil authorities both in Israel and in the Palestinian Territories, and I witnessed the great efforts that both governments are making to secure people’s well-being. I have met the leaders of the Catholic Church in the Holy Land, and I rejoice to see the way that they work together in caring for the Lord’s flock. I have also had the opportunity to meet the leaders of the various Christian Churches and ecclesial communities as well as the leaders of other religions in the Holy Land. This land is indeed a fertile ground for ecumenism and inter-religious dialogue, and I pray that the rich variety of religious witness in the region will bear fruit in a growing mutual understanding and respect.
Mr President, you and I planted an olive tree at your residence on the day that I arrived in Israel. The olive tree, as you know, is an image used by Saint Paul to describe the very close relations between Christians and Jews. Paul describes in his Letter to the Romans how the Church of the Gentiles is like a wild olive shoot, grafted onto the cultivated olive tree which is the People of the Covenant (cf. 11:17-24). We are nourished from the same spiritual roots. We meet as brothers, brothers who at times in our history have had a tense relationship, but now are firmly committed to building bridges of lasting friendship.
The ceremony at the Presidential Palace was followed by one of the most solemn moments of my stay in Israel – my visit to the Holocaust Memorial at Yad Vashem, where I met some of the survivors who suffered the evils of the Shoah. Those deeply moving encounters brought back memories of my visit three years ago to the death camp at Auschwitz, where so many Jews - mothers, fathers, husbands, wives, brothers, sisters, friends - were brutally exterminated under a godless regime that propagated an ideology of anti-Semitism and hatred. That appalling chapter of history must never be forgotten or denied. On the contrary, those dark memories should strengthen our determination to draw closer to one another as branches of the same olive tree, nourished from the same roots and united in brotherly love.
Mr President, I thank you for the warmth of your hospitality, which is greatly appreciated, and I wish to put on record that I came to visit this country as a friend of the Israelis, just as I am a friend of the Palestinian people. Friends enjoy spending time in one another’s company, and they find it deeply distressing to see one another suffer. No friend of the Israelis and the Palestinians can fail to be saddened by the continuing tension between your two peoples. No friend can fail to weep at the suffering and loss of life that both peoples have endured over the last six decades.
Allow me to make this appeal to all the people of these lands: No more bloodshed! No more fighting! No more terrorism! No more war! Instead let us break the vicious circle of violence. Let there be lasting peace based on justice, let there be genuine reconciliation and healing. Let it be universally recognized that the State of Israel has the right to exist, and to enjoy peace and security within internationally agreed borders. Let it be likewise acknowledged that the Palestinian people have a right to a sovereign independent homeland, to live with dignity and to travel freely. Let the two-state solution become a reality, not remain a dream. And let peace spread outwards from these lands, let them serve as a “light to the nations” (Is 42:6), bringing hope to the many other regions that are affected by conflict.
One of the saddest sights for me during my visit to these lands was the wall. As I passed alongside it, I prayed for a future in which the peoples of the Holy Land can live together in peace and harmony without the need for such instruments of security and separation, but rather respecting and trusting one another, and renouncing all forms of violence and aggression. Mr President, I know how hard it will be to achieve that goal. I know how difficult is your task, and that of the Palestinian Authority. But I assure you that my prayers and the prayers of Catholics across the world are with you as you continue your efforts to build a just and lasting peace in this region.
It remains only for me to express my heartfelt thanks to all who have contributed in so many ways to my visit. To the Government, the organizers, the volunteers, the media, to all who have provided hospitality to me and those accompanying me, I am deeply grateful. Please be assured that you are remembered with affection in my prayers. To all of you, I say: thank you, and may God be with you. Shalom!

In the entire time that Pope Benedict was in the Middle East, he had one over arching message: "No more bloodshed, no more fighting, no more terrorism, no more war. Instead, let us break the vicious cycle of violence."
In this trip Pope Benedict stayed on point, in spite of the attempts from hard line Muslims and Jews to divert his message. By the time the Pope left for Rome these nay sayers were drowned out by the vast majority of people who heard Benedict speak the words they hold in the deepest places in their hearts. No more war, no more violence, no more terrorism, no more deaths of their sons and daughters.
I was very interested in what the outcome would be of the meeting between Benedict and Israeli Prime Minister Benjamin Netanyahu. According to the London Times Netanyahu wanted a very vocal condemnation of Iran. He didn't precisely get that. What he got was a general condemnation of antisemitism, and a lot more of what he didn't want and didn't address--more support for the two state solution. This is a solution which Netanyahu does not support publicly, but somewhat tepidly privately. He's on record as stating the best solution is to rebuild Palestine from the ground up and 'defer' the statehood question.
In the meantime his position is hand in glove with his Christian Zionist Evangelical supporters such as John Hagee, Michael D. Evans, and Joel Rosenberg. All three of these guys have written End Time books in which they for see Iran as a nuclear power initiating the Rapture. They want the Rapture. They want Netanyahu in power. They have been his best American buddies for a long time.
In the meantime, the Prime Minister was getting a very pointed message from the Obama administration concerning a pre emptive Israeli strike on Iran. This is the same message that Israel also received from the Bush administration at the end of last year. Netanyahu is scheduled to meet with President Obama next Monday. Apparently the administration felt it was important to get their message to the Netanyahu government before his visit. I wonder too, whether it wasn't important to get that message to Israel exactly while Benedict was there.
Benedict hammered on the two state solution and refused to single out Iran. Those are messages Prime Minister Netanyahu may need to hear as his ear has been too focused on American Evangelicals. The Evangelicals may be the loudest players in the American Christian world, but they do not speak for the totality of the Christendom. As much as Evangelicals may secretly hate Roman Catholicism, the church is still by far, the world's biggest voice for Christianity. When the Pope speaks the world listens---as the Pope has sometimes found out to his dismay. Not this time though. This time he spoke to the hopes of people of the Middle East and those of us who share this planet with them. They are not the hopes of American Evangelical Christian Zionists and the New Apostolic Reformation.
I sometimes wonder if our outspoken 'abortion only' bishops have any idea of the real agenda of their fellow Evangelical culture warriors. Catholicism does not now and really never has supported notions of the Rapture or Dispensationalism. In Catholic teaching the millennium of the reign of Christ is now. It started with the Resurrection. It continues until Jesus comes again. What the Evangelicals are up to is setting up their own time frame for their Rapture and they are using Iran and Israel to accomplish this.
In the case of the Middle East, it's critical that President Obama and Pope Benedict are on the same page. Iran is facing presidential elections on June 12 and even President Amadenijhad, should he be re elected, can't continue to set Iran against the entire world. This is especially true if the world's religious leaders are unified in their condemnation of religious extremism, a message that was sent from Jordan and stated forcefully by the Pope.
It's too bad that certain voices kept American Catholics focused on Notre Dame because Pope Benedict's trip to the Middle East was, in my opinion, the finest moment of his papacy. I just hope American Catholics understand that the Notre Dame controversy was contrived and kept going to undercut President Obama and silence Pope Benedict's message in the Middle East. The only people who really benefit from that are the Rapturists, Benjamin Netanyahu, and Amadenijhad.
Posted by colkoch at 10:03 AM