Sad Days For The Irish Church 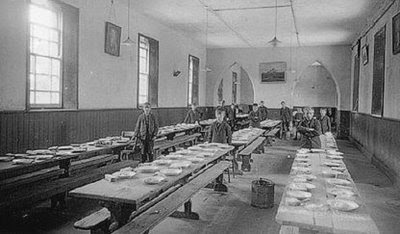 The Savage Reality of our Darkest Days
Irish Times--May 21, 2009

As I was reading the extensive coverage of the Ryan report on Clerical Whispers, my mind kept drifting back to the US and Canada's residential school system for Native Americans. These school systems were mandated by the government and run by mainstream Christian religions, including Catholicism. The abuses within these schools mirror the Irish situation. Readers of this blog will remember that the Pope recently apologized for the same kinds of abuses in the Canadian residential system. There have been apologies issued to indigenous cultures in Australia and New Zealand as well.
What makes the Irish situation somewhat unique is these were white Irish children, not the children of indigenous racial cultures. The real commonalities are found in the creation a class of 'others' and religious institutions happily taking advantage of those 'others' under the guise of Christian charity. The horror stories from around the world about Catholic orphanages, residential schools, and reformatories are mind numbingly consistent. They all describe neglect, systematic physical abuse, slave labor practices, and rampant unchecked sexual abuse. In all cases government authorities turned a blind eye.
I see this global consistency as partly a reflection of the kind of systematic abusive formation many of the religious orders used on their own novitiates previous to Vatican II. It is learned behavior and it was learned within the orders themselves. No wonder the Christian Brothers are having a hard time owning up to the level of the abuse. It means they have to take a serious look at their own formation, and that means both the theology and the view of humanity on which it's based. We will mindlessly do unto others as it has been done unto us.
The collusion of governmental agencies seems to be both a product of lay submissiveness and a culture's instinctive need to wall off and shun the defined 'other'. The more powerless that 'other' can be made the better, because at it's core, shunning is the direct expression of fear. This societal fear must be placated by controlling that other. What better organizations to placate atavistic fear in a Christian society than Christian religious groups.
The facts from the Ryan report show that leaving problem children in the hands of religious orders is a very bad solution. The facts also seem to show that Ireland was either terrified of, or grossly indifferent to their own disenfranchised children, but that's hardly a situation unique to Ireland.
For too many societies stray kids seem to equate with stray dogs. Institutionalizing them doesn't touch the underlying problems, but it does remove the results of the problem from view. It deludes society into thinking someone is dealing with the problem in a mature and caring way. That delusion is being blown sky high in Ireland. Religious members who have been systematically infantilized, humiliated, and formed through abuse, are incapable of maturity or compassionate concern. They are however, perfectly capable of modeling their formation on defenseless and powerless children.
Those conservative Catholics who think returning to the pre Vatican II church and restoring convents and houses of religious formation to this period, is a good thing, should study the situation in Ireland. The abuses did not abate until after Vatican II reforms had been enacted in religious houses and Catholic parishes. This is not an aberration. It's a product of a different theology with a much more positive view of humanity.
Vatican II changed the Catholic view of the world in many different ways and a lot of it has born very positive fruit. But the one point on which the Church refused to change, that of sexual morality, has now become the rallying point for conservative elements who have taken it upon themselves to dictate sexual morality for the rest of us. This is no different than the previous Christian reformers who saw it as their duty to protect society from poor children, single mothers, and entire indigenous cultures.
When the State combined with the Church to 'reform' in those areas it led to manifest unfettered abuse of defenseless and powerless people. The exact same thing will happen again should the state and church combine in an effort to 'reform' sexual morality. We can see this happening right now in gender based school bullying and the elements lining up against any attempts to deal with it, including the Roman Catholic Church.
Let the Ryan report do more than scandalize us, let it shine some light on the present. Schools are still places of systematic terror for too many of our children, and society is still turning a purposeful blind eye.