The ABC's of AIDS Marriages: It's About The "C" 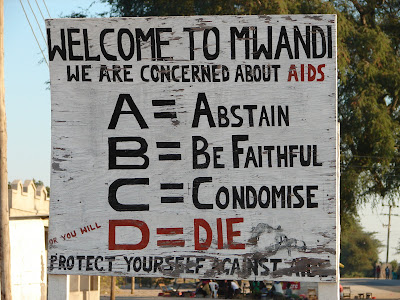 Church Canons Silent On AIDS Marriages
JACOB KAMBILI in MwanzaDaily News; Tuesday,July 29, 2008 @00:03
Roman Catholic Church priests have acknowledged here that they find themselves in dilemma when it comes to deciding whether or not to approve marriages involving couples determined to have been infected with HIV/AIDS.
They expressed their views following a question raised by Fr Peter Mzirai from the Diocese of Same in Kilimanjaro Region, who sought clarification as to what the priests ought to do under such a situation. In response Fr John Chacha, who had previously made his presentation, at St Augustine University of Tanzania (SAUT) here, said the existing canons recognized the church as the only custodian of public morals, including matrimonial matters. However, he said, the Church, as an institution, had to take such a responsibility cautiously, considering that the HIV/AIDS infection rate was still alarmingly high, particularly among the young , with women and girls being more vulnerable.
After a heated discussion, Fr Jones Mlewa from the Diocese of Singida said that the most appropriate remedial measure was to counsel the couples into giving up their marriage plan. In his opinion, allowing the couples to marry would defeat completely “the aforesaid sacred purpose of marriage,” a remark to which 11 other participants nodded approvingly.
Wrapping up the discussion which reigned at the week-long special course organized by the University's Human Rights Centre, Fr Chacha, himself a lecturer at the Faculty of Law, advised the clergymen to use commonsense and wisdom in deciding what to do. He said, however, that the canons of the Church were silent on the matter.

The course participants were drawn from the dioceses of Geita, Musoma, Tabora, Same, Songea, Mbinga, Nyombe, Dodoma and Kigoma. In his closing remarks, the SAUT Vice Chancellor (Administration and Finance), Fr Herman Kachema, said the priests were the 'salt’ of the earth and as such they were duty bound to preach the gospel and human rights issues simultaneously.
*****************************************************************
I can certainly see where AIDS marriages pose a dilemma for priests. It seems that the only way out of the dilemma is to encourage couples not to marry. Otherwise these couples may be tempted to use condoms. Unprotected sex may expose one or the other partner to a deadly disease and any offspring which could result from their procreative sexual activity. In lieu of this, some priests have seriously suggested couples marry and then live like brother and sister. This advice is more likely to be given when the couple is raising children from previous marriages.

I always find it fascinating to watch what happens when absolutist positions clash with a reality which puts the absolutist positions in conflict with each other. Sex within AIDS marriages is one such reality. I'm not surprised the Church has no canons dealing with this issue. It's an issue which transcends the logic of Thomistic natural law.

Of course what's really happening on the ground is based in reality and not the transcendant sexual notions of the Vatican. AIDS marriages are happening all the time and people are using condoms within them. They can even have healthy AIDS free babies if they time unprotected intercourse with high CD4 (white cell counts) levels. The developing widespread access to cheap ARV's (Anti Retrovirals) is allowing people to live much longer, healthier and productive lives. AIDS is no longer a mandatory short term death sentence, and people who are responding to ARV's are also experiencing a heightened level of sexual desire. They have hope in a future and marriage is part of that hope.

In the meantime the Church in India and Burundi have made AIDS testing mandatory as part of the application for the Sacrament of Marriage. This has been received with mixed reviews. Some people feel it is an unwarranted intrusion into the couple's relationship, and others see it as one way of stopping a dishonest partner from infecting an unsuspecting partner. In both countries the Church maintains it will not prevent a marriage based on a positive test. I guess this means that it is in the hands of the local priest to decide how to counsel his couples. I actually don't understand why governments aren't mandating this as part of a marriage license. My ex husband and I had to undergo blood testing and I personally was glad to find out we had no Rh issues.

What's happening in Africa as we come to the twenty year marker for the pandemic is interesting indeed. AIDS educators have now admitted that it is absolutely essential to get the main religious leaders to speak about this subject. This is forcing the Muslim world to look at their own sexual theology. In general they reinforce the concepts of Abstinence and Being faithful, while turning the Condom issue over to their medical peers. Muslim Imams don't advocate for the use of condoms, but unlike in Catholicism it is not considered a sin to use them. They base their thinking on a form of PROPORTIONALISM. That is, it's a far lesser sin to use a condom than to potentially kill your partner by not using one. They consider this a PROLIFE position.

Anglicans stress all three of the ABC's, and officially Roman Catholics teach against the use of condoms. Officially. Unofficially the attitude is very close to that of the Imams. Priests talk about A and B and then refer to others for information on C. A position for which Caritas was castigated by an influential--probably self styled--US theologian as a purposeful tactic designed to circumvent the infallible teaching of Humanae Vitae.

It is also (sad to say) not unusual for traditionalist clergy to maintain that condoms don't work because the pores in the latex allow the virus to pass through, and that condoms break anyway. This notion, in spite of reams of evidence to the contrary, has just recently been reiterated by a Vatican Cardinal. This pronouncement would not be a case of proportionalism, but a case of delusionalism. That's the best case, delusionalism. Any other motivation for such a pronouncement would imply purposeful misinformation.

In any event, I hope we won't see any canon laws written to cover the situation of AIDS marriages. I really doubt any bishop's conference is going to want to be stuck with one position given to them from on high. The way things stand now the decisions are left at the place where they can--in theory--be best made. That at the level of the parish priest and the couple, who are the ones most impacted by their AIDS status.

The best case scenario is that the Vatican will finally come out with the very same reasoning the Islamic world has already beaten them too, and it will be OK to use condoms with in marriage. Actually that loophole was left open in the 1987 document Donum Vitae in which John Paul II declared that condoms could never be used by homosexual couples or non married couples, however, it omitted married couples. Since Cardinal Ratzinger also signed off on this, I doubt it was a clerical oversight. So while it will always be OK for gays and non married singles to kill each other through unprotected sex, ( they're sinners anyway) married couples may be given an out. I say maybe, because given the Vatican propensity to be terrified of the slippery slope, this all remains to be seen.

For those of you who might be interested in getting up to speed on what's happening on the ground in Africa in the lives of real married people dealing with AIDS within marriage, here's a great start on a great website: http://www.plusnews.org/InDepthMain.aspx?InDepthId=70&ReportId=62646&Country=Yes

Here's an update to this story. This is part of an interview with Msgr. Robert Vitillo, the Vatican advisor to Caritas International. Caritas is participating in the XVIII International AIDS Conference currently convened in Mexico City. If you read his answer to the question, you will see he doesn't answer the question. He gives the Vatican spin. The full article can be read here: http://www.zenit.org/rssenglish-23393

Q: Last week 50 Catholic groups asked Benedict XVI to lift the Church's ban on artificial contraception, and accused the Church's stance of having "catastrophic effects" in the spread of AIDS. Does the Church's position against condoms constitute an obstacle against fighting AIDS?

Monsignor Vitillo: I would like to slightly transpose this question in order to emphasize my strong conviction that the Church's teaching, which insists on sexual abstinence outside marriage and lifelong, mutual fidelity within marriage, is indeed scientifically valid and has offered evidence-based proof that people who observe such behavior have been able to prevent the spread of HIV.
Studies in countries where the HIV prevalence rate has been decreased in recent years, such as Uganda, Kenya, and Thailand, indicate that people in these countries were more disposed to reduce the number of their sexual partners and/or to delay the onset of sexual activity than to adopt the use of condoms.Such behaviors -- reduction of sexual partners and delay of onset of sexual activity -- are much closer to the Church's teaching on sexuality and on prevention of HIV and other sexually transmitted infections than is an exclusive focus on condom promotion.
Regrettably, however, many scientists, HIV prevention educators, and AIDS activists are so fixed on condom promotion that they do not give due attention to the risk avoidance that is possible to achieve through abstinence outside marriage and mutual, lifelong fidelity within marriage.I believe that the Church does a great service to HIV prevention efforts by focusing on risk avoidance and on deeper and longer-lasting behavior change that is necessary to make a significant impact on reducing -- and, hopefully, stopping -- the further transmission of HIV.
There are two issues I have with this statement. The first is Msgr. Vitillo doesn't answer the question about condoms and their use in prevention, and secondly, I haven't read any report from any reputable scientific study which doesn't stress that the A and B in the ABC protocal have had a signigicantly positive effect on the transmission of AIDS. But they also state that abstinence and monogamy are cultural, age, and gender specific in thier consistency of application. Again the education level of the female has a profound effect, maybe the most profound effect. In the meantime the lack of availability of condoms is killing people, a fact the Msgr refuses to address. This is especially true in the hardest hit poor areas where Catholic services maybe the only services that people have access to.
Caritas orkers on the ground know all this and many are actively petitioning for a change in the condom policy while ignoring it as best they can in their day to day work. Thank God. The Church's refusal to allow the distribution of condoms is a pro death policy, and symbolically states just how much value the Church places on human life relative to their definition of human sin. This is a classic case of hate the sin and let the sinner die.