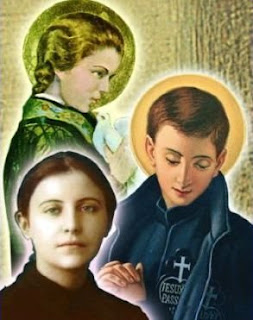 Under the headline "World Youth Day gets annoying," a Sydney Morning Herald online blog about the restrictions for the Catholic celebration from July 15-20 notes that "annoying people has been a great Australian tradition".

Under the new laws, police will be able to stop conduct that "causes annoyance or inconvenience to participants" in World Youth Day events, which are expected to draw hundreds of thousands of young people to Sydney. {This could be a titanic clash of civilizations!}

say this means that anyone simply wearing a T-shirt with a slogan deemed provocative could be liable to arrest and a fine of up to 5,500 dollars (5,250 US dollars).
An online retailer is already advertising T-shirts with the slogan: "5,500 dollars -- a small price to pay for annoying Catholics".

The Sydney Morning Herald online carried a picture of a more loaded T-shirt reading: "The Pope touched me Down Under" -- a pun on Australia's informal name and the Catholic sex abuse scandal which now dogs the pontiff on his travels.
During a visit to the United States in April, Benedict apologised for the actions of child-abusing clergy and Australian victims of predator priests are urging him to do the same in Australia.

"The laws are likely to encourage a wave of civil disobedience, with lots of people wearing dissenting T-shirts, conducting marches and carrying banners and placards," the victim support group Broken Rites said on its website.

The team behind the popular satirical television show "The Chaser's War on Everything" has also suggested the laws would provoke rather than pacify protesters.
The programme won international headlines last year when its stars breached security at a global summit in Sydney by posing as part of a Canadian motorcade carrying an Osama bin Laden lookalike.

"I don't think people should accept silly and bad laws like this lying down," team member Julian Morrow told the Australian Broadcasting Corporation.
"I reckon everyone in New South Wales who's concerned about civil liberties should be printing up T-shirts and walking around World Youth Day to make their statement," Morrow said.

A group calling itself the NoToPope Coalition has already announced plans to hand out condoms to pilgrims as part of protests against the pope's opposition to contraception, homosexuality and abortion.

The coalition, which brings together Christians, atheists and gay groups, has said it will defy the new regulations to get across its message that opposing condom use condemned thousands of people to dying of AIDS.

"We will protect our civil liberties and help young people to protect their health, and no pope or premier will stop us," said spokeswoman Rachel Evans. {Protecting the health of young people isn't exactly the message being sent in their selections of patron saints.}

New South Wales state Premier Morris Iemma told reporters the regulations "were brought in following consultation with the church and advice from the World Youth Day authority".
But the event's organisers denied that they or the church had pressed for extra powers to be given to protect pilgrims.

"The church did not ask for any special power to be given to police," World Youth Day 2008 spokesman Danny Casey told reporters.
"Our concern has always been about the efficient running of this event, these are normal powers and people are free to protest."

However, when asked what he would consider to be an annoying act, he appeared to tempt fate saying: "If someone decided to stage a protest on the middle of the Harbour Bridge during the pilgrimage walk... that would probably be annoying."


Danny Casey, WYD spokesman, may believe that the Church did not press for special powers to be given to police, but from reading other articles and commentary most people are laying this 'draconian' law squarely on the doorstep of Cardinal Pell and his cronies.

It's hard to imagine that all the folk of Sydney, of which almost 3/4th are not Catholic, are going to take to this new law given all the upheaval the event is already causing them. Patience is wearing thin and many probably just want the 'damn' thing over with. Now they apparently can't even wear t-shirts which might hint at their displeasure.

The real target of this law is a couple of groups who don't exactly represent the Church's teachings on sexual morality--gay and lesbian groups and AIDS activists, or those which have an axe to grind--ignored abuse survivors. Can't have young impressionable Catholic minds assaulted with immorality and false secularism, or Infallible Papal teachings questioned by irritated and marginalized ex Catholics. The perfect show must go on perfectly free of imperfections. Try to be imperfect and it could cost you $5500 American, not too mention any chance at receiving any indulgences to compensate for your imperfection.

As I've been reading articles on WYD I have been struck by how orchestrated this particular version is with regards to the image of Catholicism that it is endeavoring to stress. This is way back to the future. Pius IX would be proud. Pell has orchestrated the issuing of indulgences for participation in certain events. Events which have a cost to them to participate in. So it's really more like selling indulgences. For a church whose theology, even under John Paul II, is rapidly moving away from concepts like hell, purgatory, and limbo, this is indulgence thing is a real throw back.

Then one also has the chance to venerate the relics of three youthful saints, Saint Gemma Galgani, St Maria Goretti, and St. Gabriel of Our Lady of Sorrows. All three are especially important to the Passionists and they are responsible for bringing the bodies to Australia for a country wide tour.

For those who aren't familiar with these saints, Gemma Galgani was born in 1878 in a small Italian town, died at 25 from tuberculosis, turned down two marriage proposals and was a stigmatist. Maria Goretti was born in another small Italian town in 1890, was murdered at 12 in an attempted rape where she was reputed to have said she would rather die than submit. She forgave her attacker from the otherside and the dream he had in which this happened changed his life. She was canonized in 1950 as a martyr. St. Gabriel has a slightly different story, although he too was born in Italy (1838) into a large relatively poor family. He was something of a dandy, earned the nickname 'the Dancer' and although pious, did not immediately discern a vocation until he had a mystical experience which propelled him to join the Passionists. He died of TB at 28 before he could be ordained. St. Gemma credits his intercession for curing her from a dangerous illness and leading her to the Passionists.

It's interesting to note that all three of these saints were products of the Italian church of the 1800's at which time the Vatican was in it's full throttle denunciation of 'modernism' and actively encouraging a very pietistic personal spirituality centered on the veneration of Mary and various saints, developing a very high clericalism and redefining the Papacy's notion of infallibility to include about everything. These three young people are the perfect example of the perfect Catholic youth of this apparently perfect time. Perfect for Pell's World Youth Day, but also perfectly irrelevant for the vast majority of modern youth. Perfect.

As I stated in the previous post, the Church is using the saint factory to send messages. No question that this is happening in Sydney and these three young saints leave little doubt as to the message. Vocations and obedient piety are good, sex and marriage are bad. Up with religious and clerics, and down with sex and the laity. A perfect message for a church hell bent an being perfectly irrelevant.