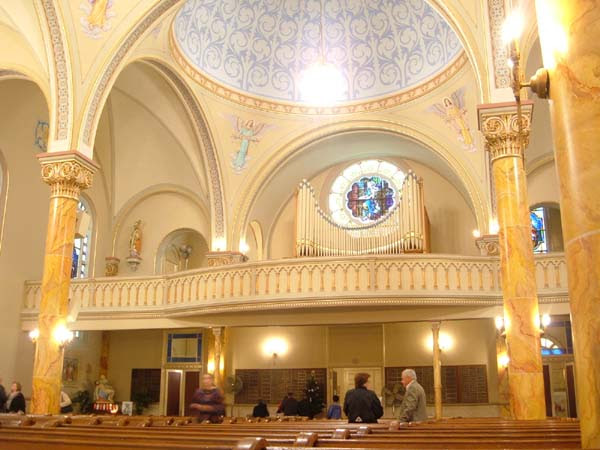 The following is from the St. Louis Dispatch:

By Heather Ratcliffe
ST. LOUIS POST-DISPATCH
07/24/2008St. Louis — The Archdiocese of St. Louis and six current and former members of St. Stanislaus Kostka Catholic Church filed a lawsuit Wednesday that they believe will lead to a compromise on how the parish will be managed.The plaintiffs are asking a judge to restore the structure of the parish to the way it was before 2001, when the St. Stanislaus board controlled the property and assets while the archbishop appointed board members and a pastor.

Archdiocese officials said St. Stanislaus would be unlike any other parish in St. Louis under this structure. They hope the lawsuit will lead to a compromise, one that the archdiocese is willing to make if it leads to reconciliation with the historically Polish parish, officials said."We want to do everything we can to bring healing to St. Stanislaus," said Bishop Robert Hermann, who is the acting leader of the archdiocese.

The parish had managed itself in a special arrangement dating back to the 19th century. Tension between St. Stanislaus and the archdiocese escalated in 2004, when the church's lay leaders refused the archdiocese's instructions to conform to the same legal and financial structure as all other parishes. Then-Archbishop Raymond Burke responded by removing the pastors.

The Rev. Marek Bozek, who is serving as pastor at St. Stanislaus, said his parishioners had been asking the archdiocese to honor the century-old agreement since the beginning of the dispute."I will be the happiest person if reconciling is possible," Bozek said Wednesday. "If they are saying that they are willing to go back to the original agreement, it proves that we are right." {This is true Fr. Bozek, but it may also be about something else entirely removed from this dispute.}

The Polish-born Bozek left his assignment in Springfield, Mo., without permission from his bishop to become St. Stanislaus' pastor in December 2005. Burke quickly declared that Bozek had excommunicated himself by committing "schism."Soon afterward, the archbishop declared the St. Stanislaus board members to be excommunicated and stripped the parish of its standing as a Roman Catholic parish.

Conflict eventually developed among board members. They split 3-3 in a vote to remove Bozek last month. In a subsequent vote in which Bozek participated, the board voted 4-3 to dissolve itself and allow the parishioners to elect a new board at its annual meeting in August.

The three dissenting board members, Bernice Krauze, Stanley Rozanski and Robert Zabielski, each met with Burke one-on-one in June to discuss reconciliation. They have since been granted absolution from excommunication. The three recent board members and other parishioners joined the archdiocese in the lawsuit. They are asking a St. Louis judge to void any changes to the St. Stanislaus' bylaws since 2001. They are also asking for a temporary injunction to keep the St. Stanislaus parishioners from electing new board members, using church funds, altering or removing church records, and removing sacred items from the church.

St. Louis Circuit Judge Bryan Hettenbach set a hearing in the case for Aug. 5. Archdiocese officials said they hoped the matter could be resolved before then. Bozek said he would be willing to sit down with the archdiocese's leaders to discuss a compromise.

"The archbishop didn't want to make this worse," Huger said.

Now that the former board members are seeking reconciliation, the time is right to file the lawsuit, he added. If both parties agree to return the previous management structure — brokered in 1891 — it will bring the parishioners back into communion with the Roman Catholic church. But such a compromise also would mean Bozek will be removed as pastor. The Vatican is currently considering a request from Burke that Bozek be laicized, or returned to the status of a layperson.

I usually don't post two stories in one day, but this one is too good to pass on. What we have here is three board members who have begun to realize they opened up a real Pandora's box when they took on Archbishop Burke and brought in Fr. Bozek. I don't suppose for one minute they ever envisioned Fr. Bozek bringing in 4 or 500 more families to their spectacular Polish enclave. 4 or 500 families who have no connection to their Polish history but a great deal of connection to the Faith and theology of Fr. Bozek, and these families would then be elected to a new board who would then have control over all the assets.

What to do, what to do? Apparently the answer is to slink back to the Archdiocese, ask for forgiveness and join forces to get their Church assets back from these Bozek upstarts. Hence we have all the injunctions and the request to return to the bylaws as they existed in 2001. Obviously the Archdiocese would have the resources to push this through the legal system. But why would the Archdiocese be willing to support the ex board members in putting egg on their own faces. I suspect it's better to lose to the previously upstart poles, (who have now seen the obedience light) than to lose everything to the upstart Bozek and his vision of Church.

Apparently the St. Stanislas saga has gone beyond that of a outrageous grab for assets and money, and has now become a symbolic battle over the future vision of the parish itself and the kind Church which will celebrate with in it's walls. And it is a gorgeous church, one worth fighting over, but then so might the human version of the Church it celebrates within it's walls. It will be very interesting to see what the response from the greater parish will be, and if Fr. Bozek really will walk off into the sunset.