Communication With The Holy Ones 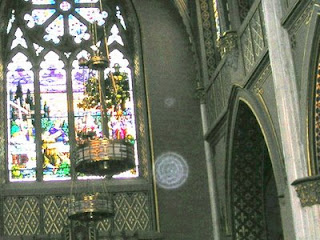 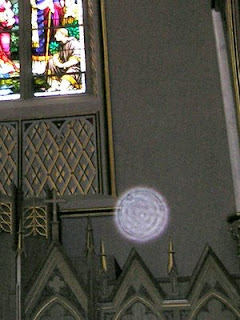 Orb photos taken in Cathedral of St. Helena. Stained glass in background depicts the finding of the True Cross by St. Helena. These are two different photos and the diameter of the orbs is around four feet.


Let the strange stuff begin. But first I have to give a little background about the above photos. About six years ago a number of us here in Helena, got interested in the orb phenomenon. At this time there was very little about this on the inter net, but now if you google 'orbs' you get 4,190,000 hits. It has become a world wide phenomenon with about 4 million explanations for what they are. What we know they are not, is camera anomalies.

These two photos represent the first orb photos I ever intentionally took. Back then we decided the best place to take and record them would be around sacred sites. For me there was no more sacred site than the Cathedral. I was excited beyond belief when I saw these in the view finder. To this day, I have yet to find a photo of what I refer to as a white labyrinth orb as in focus as the one in the photograph on the left. Usually they appear somewhat hazy, more like the one on the right. I guess it's not surprising that orb photography then became something of an obsession with me. I've taken thousands of them, and now have developed to the point where I can see them with my naked eye with the aid of a camera flash. Occasionally I'll catch them out of the corner of my eye with out a camera flash.

Anyone can take these photos, and I bet most of you have and just didn't realize it---especially if you use a digital camera. You can get them with conventional cameras, but not with near the frequency. It appears this has something to do with the digital process in the formation of the images as opposed to the chemical processes used in conventional film photography. But enough of this, if you're interested in more info there are now 4 million+ sites to choose from.

What we did find out is that Native American elders have seen orbs with their naked eyes for centuries, and it's one way they determine how much they will teach to given individuals. There are stories upon stories of orb activity in sweats and at other sacred ceremonies. Five years ago they were amazed that orbs were being captured in photos and somewhat reluctant to talk about it. Now the reluctance is evaporating because the phenomenon is so prevalent. I suppose one elder spoke for all them when he said, "It's so typical that a white would have to use technology to see what we've seen for centuries with our own eyes."

This isn't quite the disparaging comment it may at first seem to be. It has more to do with how whites view the world and how that filters out what we literally allow ourselves to see, feel, and hear. Our world view demands that we use scientific technology to enhance our sense perceptual ability because that's where we find our truth. In other words, we were blind to this reality going on all around us until we found it through technology. And because we were blind to it, our version of how the world works and how man fits into it is incomplete. Given this, it's not surprising that over time those of us who have taken thousands of these will begin to see them with our own eyes. The validation from the technology has given our brains permission to process this information where before our brains would filter it out as non essential information.

For Leon and other Native Elders, these orbs are inner dimensional entities which work with humanity. Some of them are person specific, some are clan specific, some are nation specific, as in tribes, some are not nice and do not have mankind's best interests at heart, and some represent very high energy which in their system would be similar to our angelic realm. In other words orb photos represent real races. Real aliens, I guess you would say, from other dimensions of reality. But many of them are also manifestations of ancestral spirits in their non material eternal form. Yes, the concept of reincarnation is alive an well in Navajo land, just as it is in Tibet.

All of them are capable of being communicated with and will impart information for healing, teaching purposes, and individual missions. Some of this comes in dream form, some of it in revelation or channeling, some of it on vision quests and some on prayer journeys. In Leon's case some of it will come in the form of petroglyphs which will literally change over night, or sometimes before one's eyes, in specific sacred sites on the Navajo reservation. The key seems to be setting up the appropriate mental framework which is why this communication will happen frequently at ceremonies. The energy from groups gathered for a specific reason also enhances the clarity and quality of the communication. Jesus told us that when he advised He would be there when two or more gathered in His name.

All of this has led me to do some long hard thinking. In Catholicism we seem to have a split mind about all of this. We speak of the Communion of Saints and Angels and offer prayers and devotions, and then will turn around and insist on physical proof of their existence and their actions in our lives. Just like the little boy in the story I related a few days ago, when he asked Leon if the coyote could physically throw the stars up into the sky. Well, no a coyote can't physically throw the stars up into the sky, but a coyote as a metaphor for the action of the Creator can throw the stars up into the sky, and it can be a story with as real an impact on one's world view as the big bang theory of how the stars got there. Unfortunately for us in the West, we are so hooked on left brained thinking that we need physical manifestation, preferably through some form of technology, before we can integrate this as useful information.

I think we in the West are of a split mind because one of the cornerstones of our world view is the dualism between the material and spiritual worlds. The God out there somewhere with all his saints and angels would not dain to dirty Himself being directly connected to our reality. Occasionally He, or one of His representatives, will throw us low life humans a bone, flick a few crumbs off the Divine table. Once He sent Himself through His Son in a mostly vain attempt to lift us out of our personal sewers. The sewers our original progenitors created for us in one fell swoop with one poorly thought out decision and over which we had no choice. Then once we find ourselves here we have essentially one choice, we can toe the line in obedience to His self appointed agents on earth and maybe luck our way into the Divine banquet, or we can sink even further into the abyss. Leon's world view is entirely different.

In Leon's world the Creator, the Creator's other sentient races, and Leon's ancestors are all in this soup with us, prodding us and teaching us and giving us information which will help us. When I wrote yesterday that the Holy Ones had given the Navajo the solution for their radiation infested crystals, that wasn't a fantasy story. That was literal truth. It's the same way medicine people know which plants will help for which diseases. I sometimes laugh when I think about how our pharmacological researchers think this knowledge was derived by trial and error. If that scientific world view was true, this Western trial and error process would have resulted in the deaths of a whole lot of medicine people and a whole lot of natives.

So what is that gorgeous white orb in the photos? Why that apparently is a member of the non organic inner dimensional sentient race we call angels. As it is with the Navajo so it is with Christians. The difference is Navajos expect the communication as just the way their world works, and we think we need to jump through endless hoops of holiness. Therefore only a miniscule number of people have jumped through enough hoops and we call them saints, and we don't usually recognize their abilities until well after they have died. Padre Pio is the rare contemporary example of a Catholic saint Native Americans would recognize as a powerful Holy Man. Pio had the inner dimensional connections, the understanding, and the ability to manifest the earth altering power of these connections while he lived. He also lived a very clean and mission oriented life. I imagine if I had been able to photograph him there would have been a lot of orbs around him.

There is a lot of truth to the fact that cleaining up your ego act is a big key to enhancing this communication and it's effects on this physical reality. More on this, and that, tomorrow.