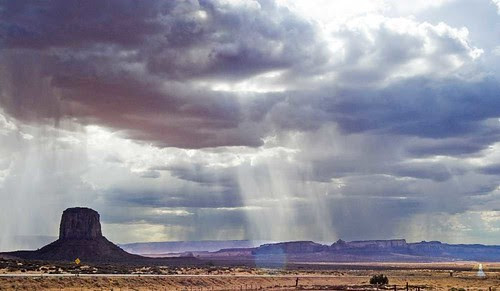 At the end of yesterday's post I wrote that Leon Secatero frequently mentioned that Navajo Spirituality was also their science, and that their science was best explained in Western terms in the language of quantum physics. I understood this to mean that spiritually the Navajo live in a mental world of both/and, rather than the West's either/or. This thinking is much more compatible with the Spiritual approaches of the Orient, like Buddhism, especially Zen, than it is with the Christianity of the West. This 'both/and' approach allows one to understand one is both a unique event in creation, and also an inseparable intimate part of the whole.


As an important aside, it 's interesting to note that both the Tibetan Buddhists and the Navajo engage in sand painting and the protocols surrounding their execution of sand paintings are very very similar. I guess that's why it's not surprising that when the Dalai Lhama first came to the US he spent three weeks in Navajo and Hopi land before meeting with the President of the United States. They were comparing prophecies and remedies for those prophecies. Presidential meetings were entirely secondary.


How is it that two disparate spiritualities from opposite parts of the world engage in the same spiritual activity, have similar understandings, and in many cases a language and alphabet which is the mirror image of the other? There appears to be a both/and explanation for this. One is the Native understanding that they are not a product of some unbroken line of human evolution, but direct descendants of the Star Nations, and that they were 'planted' in their respective areas. In this sense so were the Oriental, Black, and White races. Due to their relative isolation, the Tibetan Buddhist's and Native American tribes were able to keep their original information and spirituality more or less in tact through a rigid oral history keeping, mostly within genetic families. Of course over the centuries there has been corruption and modification, but at least these two traditions were able to recognize a shared mutual truth in the other. That's the 'both' of the 'both/and'.


The 'and' reason is they both recognize that we are all connected on the quantum level and that we can all access a universal pot of information. It may also be that the Navajo and Hopi are connected in an especially strong way with Tibetan Buddhists. We know for instance from experiments conducted in labs, that if a set of paired electrons and photons are split apart and the valance of one is changed, the other will change instantly at the same time irrespective of distance. In other words the maintenance of their relationship transcends the Newtonian laws of time and space, and this relationship is one of mirror image. It may be that the close association of these spiritual traditions is the human form of manifesting this quantum fact. (This is all just my speculation.)


The really fascinating thing to me about the notion of descent from the Star Nations is that the Navajo have had an initial understanding of the under workings of the universe that has always placed an emphasis on time as the underlying force in manifesting the sense perceptual reality we all experience. Most cosmological systems, including the West, speak of four elemental properties of existence: Earth, Water, Fire, and Air. In the Navajo system there are five elemental properties: Matter, Water, Air, Light, and Time. Leon gave us a fascinating creation story which speaks to these five elements, but in the interests of brevity, I'll for go relating that story. The really critical aspect though, is the notion of Light and Time. These are quantum concepts and the quantum elements which define matter.


Given that Navajo Spirituality is their science and vice versa, their spiritual ceremonies then can be seen as a form of quantum technology based not only in their notions of human consciousness, but also in real forms of technology. One of those technologies is crystal gazing.

Leon demonstrated it while he was here, and although I was not present at the time, the people who were all saw the same thing. In an otherwise inert crystal, when Leon placed it in the proximity of a photo he had on his lap top, people were able to see bubbles running upward in the crystal itself. Leon said this was the first step in 'tuning' the crystal, and if there had been less light in the room, pictures just like a watching a video, would have manifested in the crystal.

A couple of my friends have been down in Leon's neck of the woods, and have seen this happen in multiple crystals. This use of crystals is why so many Navajo rugs employ 'crystal' patterns.

Not just any old crystal can be used to do this. The Navajo have a particular ceremony based on a particular time and place, which they perform in order to 'program' their crystals. In quantum speak, this would be a form of laying a particular sub atomic matrix by using a specific electro- magnetic field and specific light characteristics. In this particular demonstration Leon used a crystal from a friend of mine who had been at this 'programming' ceremony a couple of years before. Where as this crystal started to work, no others would. Which I guess demonstrates that crystal gazing is a product of a specific and repeatable programming rather than an inherent property of specific kinds of crystals. In other words, it's the precision of the ceremony, not the crystal itself which allows for the pictures to appear in the crystals. Pretty far out stuff until you realize that the computer on which I'm writing is also a product of silicon crystal technology with specific programming. The real difference is the type of physics being employed. One is Newtonian and the other is Quantum. Newtonian physics uses a ton of energy to produce my computer, but the Navajo use virtually no energy, save their own human energy, to produce a workable crystal.

Interestingly enough, Leon said that when the atomic bomb was exploded at Los Alamos all their crystals stopped working. Apparently the released radiation eroded the programmed matrix, but that elders were given the remedy from the Holy Ones and the crystals were reprogrammed.


Here's where it might actually get strange. The photo on Leon's computer was a picture of the landscape around his home, and in the center of it was a blue orb. One very much like the orb in the photo accompanying this article. The photo with my profile is of a white orb taken in my local Cathedral. Tomorrow I will discuss Leon's notion of the Holy Ones and what the orbs are in his thinking and why different spiritualities, cultures, and races are so critical to the setting of the calendar for the next 500 years.