An Amazing Exercise In Vatican PR 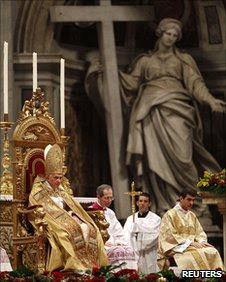 Pope Benedict 'condones condom use in some cases'

Pope Benedict XVI is reported to have said the use of condoms is acceptable "in certain cases".

In a book due to be published on Tuesday, he said they could reduce the risk of infection with HIV, such as for a homosexual prostitute. (This just so duplicitous and it's not funny.)

The pontiff is reported to have made the comments in an interview with a German journalist. The Vatican newspaper ran excerpts on Saturday.

When asked whether the Catholic Church is "fundamentally against the use of condoms", he is said to have replied, in the book entitled Light of the World: The Pope, the Church and the Signs of the Times:

"It of course does not see it as a real and moral solution.

"In certain cases, where the intention is to reduce the risk of infection, it can nevertheless be a first step on the way to another, more humane sexuality," he told German author Peter Seewald.

Until now, the Vatican had banned the use of any form of contraception - other than abstinence - even to prevent sexually transmitted diseases. (In the case of homosexual prostitutes condoms are not a form of contraception. Nothing has changed. The Pope is playing PR games with people's lives.)

This has led to the Vatican being criticised for its position in the context of the Aids crisis.

I'm sure every wife married to an HIV positive husband or vice versa, is over joyed with the news that it's probably OK with Benedict for homosexual prostitutes to use condoms.  This is absolutely no change in the condom policy for heterosexuals.  Wait for the brouha this will cause in Africa.  I have to question what in the world Benedict or the Vatican actually thought they were accomplishing in this case.  This will be a PR disaster when all is said and done.

One last point.  In my mind this actually places the relative worth of women vis a vis their reproductive organs at a new low point in Catholic moral theology.
Posted by colkoch at 11:17 AM