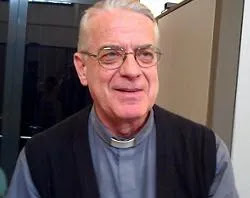 Note of Fr. Lombardi on the words of the pope on the question of condoms
John Allen - National Catholic Reporter - 11/21/2010
At the end of chapter ten [note: in the English edition, chapter eleven] of the book Light of the World, the pope responds to two questions about the struggle against AIDS and the use of condoms, questions which refer back to the discussons which followed some words spoken by the pope on the subject in the course of his trip to Africa in 2009.

The pope clearly reaffirms that he had not meant [in 2009] to take a position on the problem of condoms in general, but simply wanted to affirm strongly that the problem of AIDS cannot be resolved solely with the distribution of condoms, because much more has to be done: prevention, education, help, council, and staying close to the people – both so they don’t become sick, but also when they are sick.

The pope observed that even in non-ecclesial environments, there’s a similar awareness, such as that of the so-called “ABC” approach (abstinence – be faithful – condoms), in which the first two elements (abstinence and fidelity) are far more determinative and fundamental for the struggle against AIDS. Meanwhile the condom, in the final analysis, seems like a shortcut when the other two elements are missing. It must be clear, therefore, that condoms are not the solution to the problem.

The pope then broadens the focus, insisting that to concentrate solely on condoms is tantamount to making sexuality into something banal, losing its meaning as an expression of love between persons, and turning it into a sort of “drug.” Struggling against the banalization of sexuality is “part of a great effort to see that sexuality is positively understood, and can exercise its positive effect on the human person in his or her totality.” (This statement is relational, and takes sexual morality beyond the biological Natural Law realm. This is very interesting.)

Thus the pope is not reforming or changing the teaching of the church, but reaffirming it by placing it in the context of the value and the dignity of human sexuality as an expression of love and responsibility.

At the same time, the pope considers an exceptional situation in which the exercise of sexuality respresents a true risk to the life of another. In that case, the pope does not morally justify the disordered exercise of sexuality, but holds that the use of a condom in order to diminish the threat of infection is “a first assumption of responsibility,” and “a first step in a movement toward a different way, a more human way, of living sexuality,” rather than not using a condom and exposing the other person to a threat to their life.

In that sense, the reasoning of the pope certainly cannot be defined as a revolutionary shift. Numerous moral theologians and authoritative ecclesiastical personalities have sustained, and still sustain, similar positions. Nevertheless, it’s true that until now they have not been heard with such clarity from the mouth of the pope, even if it’s in a colloquial rather than magisterial form. (Wow, that's an interesting way of putting this. It's sort of like saying this a minor league statement rather than a major league statement.)

Benedict XVI therefore courageously gives us an important contribution of clarification and deepening on a question that has long been debated. It’s an original contribution, because on the one hand it remains faithful to moral principles and demonstrates lucidity in rejecting “faith in condoms” as an illusory path; on the other hand, it shows a comprehensive and far-sighted vision, attentive to discovering the small steps – even if they’re only initial and still confused – of a humanity often spiritually and culturally impoverished, towards a more human and responsible exercise of sexuality.

Austen Ivereigh on America also has posted an interesting take on Benedict's real meaning behind his statement.  Ivereigh maintains this position is nothing new and that the reason it hasn't been stated before is that it would be a communications nightmare and be totally misunderstood:

Cardinal Joseph Ratzinger told Cardinal Murphy-O'Connor shortly before becoming Pope that "we can't have cardinals disagreeing about this" and set up a commission of moral theologians to look into the question.
And there the issue lay, and no more was heard.

In 2008, while at a conference in Rome, I happened to meet a senior CDF official (I won't give his name) and  asked him what had happened to the commission. "Everyone knows that theologically there is a strong case for clarifying that teaching," he told me, "but there's just no way of doing it publicly without it being misunderstood." Do you mean, I pressed him, that the Vatican feared the headlines that would result? "Exactly," he said. "It would be confusing for the faithful." There was "just no way", he said, that the Vatican could make this clarification without seeing headlines like "Pope backs condoms" or "Church in reverse on contraception.

I actually don't think the Vatican's real problem was with media misinterpretation, although there seems to be a certain amount of that, I think it was with the orthodox going off the deep end--and they will, just like they are reinterpreting or ignoring Benedict's recent statement on health care. I'm sure this is the reason Vatican correspondents like Ivereigh and Allen are suddenly emphasising the potential harassment of Benedict from the right and his courage in making this statement in view of that potential harassment.

I wrote yesterday that this statement had to be clarified by the Vatican because there were real differences in the details.  I wrote I believed Benedict meant to take the straight and narrow approach and that his statement wasn't meant to apply to heterosexual couples.  I am happy to admit I was wrong. In the original Italian Benedict actually doesn't qualify his use of the word prostitute to male prostitute or homosexual male prostitute. He just said prostitute.  It's interesting this got garbled in the English translation.  It could be that we all projected our own stuff into what he actually said because we couldn't hear what he was actually saying.  It literally didn't compute.  Which says a great deal about how beat down the progressive wing is when we can't hear good news from the Vatican.

But the real important messages for me are that this is also a small step in the direction of redefining sexual morality on the basis of relationship as opposed to biology.  It's also a small step in the notion of humanity evolving as individuals in moral and spiritual maturity.  That is a huge statement because the prevailing attitude in Catholicism doesn't include the notion of evolution in understanding or maturity.  It's all been obedience, obedience, obedience ad nauseum.

It could be this interview that Benedict has given is the opening salvo in the re evangelization of the West.  It's Benedict opening his eyes (and heart) to the fact he can't evangelize the west by using the same ideas that caused the massive losses in the first place. Along this line, there are some other really interesting statements that have been released to the media.  One involves papal retirement and Benedict's justifications for such a move on the part of a sitting Pope.  That one could have serious repercussions as well if he's actually thinking about himself.

I think if Benedict let this play out for awhile and then called another committee similar to Paul VI's birth control commission to evaluate the totality of Catholic sexual morality, he would go a long way to changing the tone of his papal legacy.  I would love to see a sexual morality based on relationship and individual maturation developed a long the lines espoused by Saltzman and Lawlor.

OK truthfully, I would also love to see the expression on "Cardinal" Burke's face if he had to teach it. We'd find out how loyal he was to the papacy.
Posted by colkoch at 9:41 AM