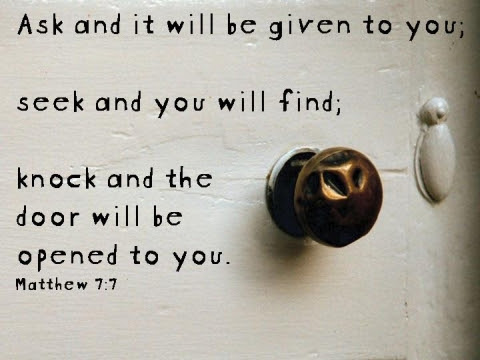 According to the hierarchical version of the Catholic consensus reality, the door won't open for just any seeker.

Just in case anyone thinks the Vatican dogma watchdogs are asleep on the job, rest assured they aren't when it comes to the culture wars and controlling the Catholic consensus reality.

AN IRISH Catholic priest has been banned by the Vatican from publishing any more of his writings after he suggested homosexuality is “simply a facet of the human condition”.

This follows an article on homosexuality by Capuchin priest Fr Owen O’Sullivan, published in last March’s edition of the Furrow magazine. Described as “a journal for the contemporary Church”, the Furrow is published at St Patrick’s College Maynooth.

Commenting on teachings that “homosexuality is unnatural”, Fr O’Sullivan wrote that “nature is a loose peg on which to hang a theology of human relationships”. The Concise Oxford Dictionary listed nine meanings for “nature” and 14 for “natural”, he said.

He noted it was argued that the natural purpose of sexuality is procreation “and that, since homosexual relationships are not procreative of life, they are therefore unnatural”.

Throughout history “same-sex attraction and acts have been a consistent feature of human life . . . Same-sex attraction is simply a facet of the human condition,” he said. He recalled church teaching says it is not wrong to be gay, ‘‘but it is wrong to act gay”. (And it's more or less wrong to tell anyone you are gay because that's acting gay.)

He suggested: “Imagine someone saying... ‘There’s nothing in itself wrong with being Irish... But that doesn’t mean you may act on it. So, no more Guinness, going to Croke Park, singing rebel songs into the early hours of the morning, waving Tricolours, no more craic.”

The Congregation for the Doctrine of the Faith at the Vatican contacted the Capuchin secretary general in Rome with an instruction Fr O’Sullivan was no longer to write for publication without first having his articles approved by it. (So much for open theological discussion at Maynooth.)

Capuchin headquarters in Rome contacted Fr O’Sullivan’s superiors. Contacted by The Irish Times , Fr O’Sullivan did not feel free to discuss it nor did Fr Ronan Drury, editor of the Furrow .

I seriously don't understand how one is supposed to mature in their faith when it's wrong to think even a little bit independently. To paraphrase Fr. O'Sullivan:  "Imagine someone saying:  "There's nothing in itself wrong with thinking, but that doesn't mean you can act on it."

The message to the laity is getting louder and louder:  A real Catholic follows the catechism the way a real boy scout follows the boy scout handbook---or as a cook, as opposed to a chef, follows a recipe.  The basic idea is that the eternal life, like a good oatmeal cookie, is the result of following the Catholic recipe.  No one gets to heaven acting and thinking as if they are their own Martha Stewart.  If you happen to be under Church discipline, such as Fr. O'Sullivan,  you will be disciplined for that kind of thinking.

All of this ignores some serious statements of Jesus in the New Testament.  Such as (Lk 17:21) "the Kingdom of heaven is with in you".  Jesus also had this to say a little further on in chapter 17 about the Martha Stewart's of the cook book approach:  "Woe to you, scholars of the law! You have taken away the key of knowledge. You yourselves did not enter and you stopped those trying to enter."

As my life has progressed my understanding of this description of heaven has moved from metaphorical to literal.  You could say I've become something of a fundamentalist on this notion of the Kingdom of heaven being within.  I've come to see that this means we literally hold the keys to the creation of our own circumstances and life experience with in us.  Which means that everything Jesus teaches about what we should look for and how we should act have a direct impact on the kind of kingdom we experience.  But it also has a direct impact on the kind of kingdom or reality, others experience.  When a group of like minded people come together, they create what I've referred to in the past as a consensus reality.

If you look at these expressions of Jesus as literal truth, what they are saying is we create our own heaven and our own earth experience.  We are created in God's image and likeness to be creators of our reality.  We determine the nature of the reality we will experience, just as we do when we transition our consciousness at death.  Is there a consensus Catholic heaven when we transition?  You bet, just as there is a consensus reality for Jews, and Native Americans, and Muslims, and Buddhists, and Hindus et al.  There would have to be if Jesus's statements are true.  We have the total freedom to choose how our consensus reality will manifest both here on earth and after our physical body dies.

When I've read stories about Near Death Experiences from other cultures I've noticed two things.  Virtually everyone has the experience of moving down a tunnel and a life review of some sort. People who are really vested in a particular religious or spiritual view of heaven experience some manifestation of that view.  They experience the consensus view of the heaven of their earthly spiritual system.  Which is kind of mind blowing if you think about it, because it proves that people will experience the confirmation of the truth they believe from their religious enculturation, but it also proves that Jesus was absolutely right.  Things are done in heaven as they are on earth.  We create our own experience of earthly and heavenly life.  Both kingdoms reside with in our consciousness and both are affected by our strongest beliefs.  The reality of the individual will be seriously constrained or enhanced by the consensus reality of the larger group.

If this is all true, then what Jesus was really teaching us to do was to create the consensus reality which is most beneficial and healthy for the most people.  That was the Good News, and that was the reason He was so adamant about confronting the rule makers.  The rule makers were fostering a consensus reality in which they carried no burdens because everyone else was convinced it was their job to carry all the burdens.  Same exact thing is happening as I write.  The rule makers are doing their utmost to insure the consensus reality rewards them for both making the rules and garnering the most benefit from the rules.

In the case of Catholicism this paradigm of creating the Catholic consensus reality is jealously guarded by the rule makers. They and they alone are allowed to use 'the keys'.  Guess what, times are changing and so is the consensus reality.  The laity will create a new consensus Catholic reality.  The only real question is how long will it take to manifest in this reality.  That depends on how willing the laity and sympathetic clergy are about taking responsibility for the creating. The Good News, is in many respects, even more relevant in today's modern world with it's burgeoning understanding of how the material universe was created and how it actually works.  Jesus gave us a lot of great concepts for creating the Kingdom on earth, but the biggest hurdle for most of us is to realize we actually do create our reality. Once one reaches that understanding then it's easy to go back and re read the Gospels with eyes that see and ears that hear.
Posted by colkoch at 11:00 AM