Bishop Morlino Involved In Another Crash On The Catholic Interstate 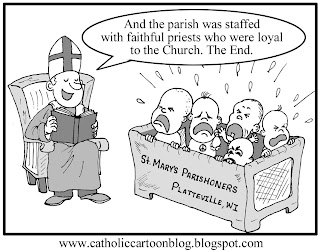 The following excerpt from the Wisconsin State Journal concerns a parish in the Diocese of Madison, Wisconsin.  It involves an American Bishop, Robert Morlino,  whose career crossed paths with my own Catholic path.  I follow his career out of a sort voyeuristic interest to see how many other Catholics will take the same hike I did, and leave the official church.  What's happening in Madison is no surprise.

St. Mary's Catholic Church in Platteville, stung by a plunge in donations following the arrival of three controversial priests, has issued an urgent plea for money to keep its parochial school open.

The 75-year-old St. Mary's Catholic School is subsidized by the church, which has seen weekly donations fall more than 50 percent in four months, said Myron Tranel, chairman of the church's finance council.

The school, with 106 K-8 students, has enough money to operate until at least January but needs an additional $200,000 to keep the facility open through the end of the school year, he said.
The financial crisis coincides with Madison Bishop Robert Morlino's decision in June to bring in three priests from the Society of Jesus Christ the Priest to lead the parish. The group is based in Spain and known for traditionalist liturgy and devotion to orthodox Catholic teaching. (Shock, another reactionary/fascist Spanish religious group.  Spain pops these out like McDonald's makes hamburgers.  No wonder Benedict is visiting Spain this week end.)

Changes the priests have made, including barring girls from being altar servers, led to a petition last month signed by 469 of the church's approximately 1,200 members asking Morlino to immediately remove the priests. In a response letter to the parish last week, Morlino said the priests have his full support and will stay. He chastised parishioners for conduct he called "gravely sinful." (Hmmm, well at least it's not a sexual sin he's chastising them for. That's refreshing.)

"It grieves me to acknowledge that the reputation of three happy, holy and hardworking priests has been seriously tarnished by rumor, gossip and calumny — lying with the intent to damage another's good name — by some within the parish community," Morlino wrote in the letter, a copy of which the diocese provided the State Journal......

Brent King, spokesman for the Madison Catholic Diocese, said the diocese has "no intention of allowing the school to fail." He said diocesan officials, if asked by the church, would offer assistance in areas such as fundraising. But he stopped short of saying the diocese would provide money to help run the school, calling that an unusual and possibly unprecedented step.....(The chancery can read the numbers as well as I can.  Besides, Morlino needs to keep diocesan money flowing to the anti gay marriage folks.  Forget children.)

Morlino invited priests from the Spanish society to begin serving in the diocese in 2006, primarily in the Sauk City area. There are now eight society priests serving seven churches.

Their arrival at each church has ushered in similar changes. They reserve the altar server role to boys to encourage more seminarians. They eliminate participation by laypeople in the distribution of communion. And they preach homilies that supporters find refreshingly forthright in stressing Catholic teaching but critics find short on compassion. (I'm sure this last issue is the big issue.  Jesus came to bring the Good News and that involved a great deal about compassion. He did not die for Catholic teaching.)

While opposition to the priests has surfaced in other parishes, it has become particularly loud in Platteville, a city of 10,500 people 75 miles southwest of Madison. Fay Stone, a 25-year St. Mary's member, said the priests' decision-making approach seems heavy handed to her. While the Catholic church is not a democracy, some degree of collaboration with parishioners would be nice, she said.

"I know they probably have church law on their side, but just because you have the right to do something doesn't make it the right thing to do," she said. (But in Morlino's understanding of his role, the two are equated

People are leaving and taking their money with them, she said.

King, the diocesan spokesman, referred all parish-related questions to the Rev. Lope Pascual, one of the three society priests at St. Mary's. He did not return phone calls.

Weekly collections had been running between $10,500 and $11,500 prior to the priests' arrival and now average barely $5,000, Tranel said, adding that the finance council created a segregated fund so that donors can give directly to the school now.


I wrote a friend the other day something to the effect that when a Church is willing to give up 80% of it's laity in order to keep 100% of the clerical structure, that was a Church that deserved to die. Benedict actually seems willing to give up the priesthood as well. It's amazing how many statements Benedict has issued in the last two years which call for individual conversion in the priesthood but totally ignores the conversion or reform of bishops and the College of Cardinals. The NCR is running another one right now. I'm sure we will hear more on these lines while Benedict is in Spain.

The Morlino's of the current Catholic world (and their continual promotion) are no surprise. What is sort of surprising is the silence of our bishops that aren't like the Morlino's of the Church. It makes me wonder what's going on under the surface of the supposed unity of groups like the USCCB. It makes me wonder about the reasons for the silence. Maybe I'm just deluding myself, but I can't believe the maturity level of all of our bishops is that of the Morlino's or the Burke's of the Church world. Not all of our bishops exhibit the kind of personality that thrives on the fantasy implied in the trappings and the pageantry of their position or insists on the kind of authority that's needed to make those theatrical kinds of fantasy come true.


The situation in Madison is a prime example of what happens when theatrical Catholicism-I won't call it traditional- collides with American Catholicism. People take their money and leave. They do not support a Catholic version of the 'theatre of the absurd'. See the comments following the NCR article about Burke.


I can find it easy to believe these three imported Spanish priests are good, and decent, and holy men, at least as defined by Morlino and Benedict. That doesn't change the fact they are also deluded if these men truly think many American Catholics find their Spanish/Trentan version of Catholicism 'Good News'. This is not a Church of Good News when it fixates on all the Bad News, especially the bad news about modern laity and the culture we live in.


In the past the Church was able to get away with force feeding the Bad News kind of theology that theatrical Catholicism needs to survive. Enough laity bought into it and the rest were able to tune it out. For the most part Catholics weren't expecting much depth in their spiritual life. By the age of ten most of us knew what it took to save our soul. People who actually wanted to grow in their relationship with Jesus joined religious orders. Parishes were sort of like full service gas stations. Laity filled up, payed up, and motored on. When they wrecked they could count on pastoral understanding from their spiritual mechanic and then got on the road again.


Vatican II merged with this sort of Catholic interstate at the same time high numbers of Catholics with advanced education merged on the same interstate. For awhile most everyone was traveling in the same direction and at Autobahn speeds. Then the Vatican flipped a U turn, with no turn signals, and insisted on staying in the same lane. Regular crashes have been occurring at frequent intervals. We no longer move at Autobahn speeds--if we move at all. Some one needs to get off this Interstate and according to the Vatican, it won't be them.


Morlino will not give any diocesan funds even if it results in closing the school. He will soothe his conscience by pointing out the Diocese did all that it could. Which in Morlino's mind will be self righteously true because 'doing all that he could' would not include money. Loosening up Diocesan funds would be the equivalent of enabling the grave evil of lay dissent. It isn't going to happen on his watch. Too bad for the kids but it's not his fault. His personal M1 Abrams tank - the one he got from his work 'overseeing' the School of the Americas- will continue it's out of sync travels on the Catholic interstate. If it runs over a few kids, well that's traditional part of the Catholic theatre of the absurd.
Posted by colkoch at 11:32 AM