A Clash Of Consensus Realities 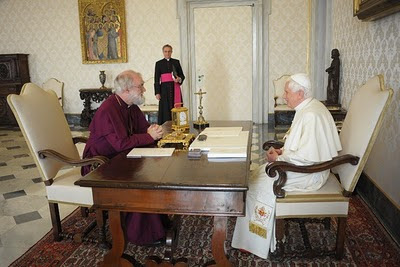 Pope Benedict and Archbishop Williams talk about everything ecumenical--except about what Benedict is doing behind Rowan's back.

I offer the following two extracts, one from a Time Magazine article on the defection of five Anglican Bishops to Roman Catholicism and the other on the status of the Reproductive Health bills in the Philippines.  For me they demonstrate just how out of touch, and yet desperate, Pope Benedict and his like minded followers are to preserve the old consensus reality regarding gender roles.

When Pope Benedict XVI made his historic visit to the U.K. back in September, the images and message were all about peace, reconciliation and understanding between churches and faiths. His meeting with the Archbishop of Canterbury, Rowan Williams, on Sept. 17 was particularly seen as part of the long healing process between the Anglican church and the Vatican. Fast-forward seven weeks, and that process seems to have shuddered to a halt. On Nov. 8, five Church of England bishops announced that they have "defected" and will convert to Catholicism — sparking talk of the biggest crisis to hit the church since 1534, when Henry VIII needed to swap wives without the Vatican's consent and broke away from Rome......(I think I've written previously that putting faith in too much of what Pope Benedict says is a mistake.  Like all of us, his truth is in what he does.)
But one of the bishops, John Broadhurst, told the Times of London he believes there will be significant further defections amongst the clergy and perhaps thousands of ordinary churchgoers. "There are lots of people interested," he said. "Some are actively looking at it. A lot of people are saying they will wait and see how it develops." Although it's a tough decision, he said, considering how Rome is not offering to replace the homes or salaries of any defectors, "I suspect thousands, not hundreds, of laity will go."

(Yes, well, the whole notion has always been about the ego identity and ego needs of the male participants and has never had anything to do with the teachings of Jesus.)

In the statement announcing their defection, the bishops declare that they feel recent developments in the church are incompatible with traditional Anglicanism. They argue, for example, that Jesus only chose men as his disciples so women should not become bishops. Campaigners such as Women and the Church (WATCH), however, point out that the church has regularly adapted its stance on controversial issues. Spokeswoman Rev Rosie Harper told the BBC: "That has been the story of the church. We worked out eventually that it wasn't God's will we should have slaves, and worked out we shouldn't be racist." (I love this line of argument. All the evidence to the contrary, and there is quite a bit, would not change this man's thinking. His enculturated ego would never give it credence.)

In Benedict's vision of the Church, one part of the consensus reality mandates that men have sole ownership of the teaching and ritual authority of the Church. I used the word authority purposely, because Jesus's idea of servant leadership was ditched almost from the get go in favor of a definition of leadership based in personal self assigned authority. The 'other centered' servant aspect was assigned by this authority to women. We now call this split between genders, the complementarity of the genders. Traditional marriage is the ultimate symbol of this complementarity of 'other centered' service oriented women, and 'self centered' authoritarian oriented men.

I'm not using 'self centered' in the pejorative sense, but as a descriptor of how men are enculturated to organize their world view. In the case of the Anglican Ordinariate it's pretty obvious the people who are attracted to it are so attracted because they believe in the above described notion of gender complementarity and their assigned roles with in this paradigm. Pope Benedict has determined that Roman Catholicism will be the last best defender of this paradigm.

One of the major clashes with actual reality engendered by this world view is that it also contains a very reductionist conceptualization of sexuality.  That view of sexuality has lately been presented in absolute terms. The farther secular culture has gotten from the idealized notion of gender complementarity, the more hard line and absolutist the religious position has become. No amount of science or sociology or anthropology or plain old fashioned reality testing impacts the "truth" of the sexual teachings. As our consensus reality about gender roles change, the keepers of the old consensus are digging in deeper and meaner.


The Philippines is currently one of the 'hot zones' in this clash of consensus realities. I've followed the ups and downs of the various Reproductive Health bills for the last five or six years. It's beginning to look like the constant and continual presentation of 'reality checks' is having an effect on the fantasy of 'gender complimentarity' with it's absolutist position on sex. The following is from a Canadian Press Release:

......Catholic church leaders oppose artificial contraceptives and say sex education, which is included in the proposals, is a parental responsibility. (Too many parents raised as strict Catholics don't actually know that much about sex.)

Rep. Luz Ilagan of the women's party Gabriela said the proposed law will limit unsafe abortions by reducing unwanted pregnancies caused by a lack of knowledge of family planning methods.

An estimated 560,000 women in the Philippines in 2008 sought abortions involving crude and painful methods, according to a report released in August by the New York-based Center for Reproductive Rights.
About 90,000 women suffer from abortion complications and an estimated 1,000 die each year, the report said, adding that complications are among the top 10 reasons women seek hospital care. (These are serious reality checks proving that making abortion illegal does not put a dent in abortion numbers. It just leaves more orphans.)


If the Philippines demonstrates the harsh reality of the absolute sexual position of gender complementarity, the Anglicans crossing the Tiber demonstrate the male self centered aspect of the paradigm. Jesus is no where to be found in men worried about their salary and housing--even if that worry is dressed up in the guise of concern for the families. If they were really worried about their families they would have accepted the Anglican overtures and stuck with the church in which they were ordained.


Reality says the consensus reality of gender complementarity has nothing at all to do with what Jesus taught. His teachings actually cut across all the traditional notions of what it means to be male or female. In His teachings being "HUMAN" meant freely choosing to be other centered in service, love, and compassion.


In the still developing new consensus reality on sex and gender we need to be very careful about not letting the new reality be co opted by the old reality. This would happen in two ways, if we accepted a notion of gender that freed women to approach life from a 'self centered' world view identical to men, or if we just flipped roles. We need to try what Jesus actually taught. That business about being other centered in service, love, and compassion and choosing freely to do that. That would respect and honor the individual while upholding the importance of healthy communities.


Encore presentations: Try these two latest NCR articles by Fr. Tom Doyle and Eugene Kennedy for two other view points about the clash of consensus realities.  And then try this one from Bilgrimage in which Bill Lyndsey quotes advice given to a faithful Catholic mother of a gay child by her Archbishop--Neinstedt:

"Your eternal salvation may well depend upon a conversion of heart on this topic".  This is the kind of 'self centered' thinking I mentioned above.  It's given to a mother whose world view is other centered.  Essentially Neinstedt says, dump your sinful 'other centered' concern for your child for the self centered goal of your own salvation.   Give me a freaking break.  I don't what this is, but it's nothing Jesus taught.
Posted by colkoch at 9:54 AM