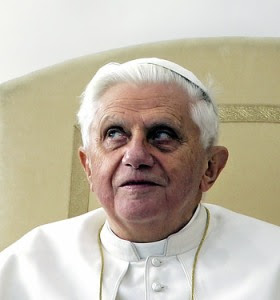 Pope Benedict photographed while listening to the Holy Spirit.  I've heard there are drugs for that.

Caritas International has asked the Vatican for clarification on how the recent statement of Pope Benedict's and Fr. Lombardi's clarification will affect them on the condom issue.  I'm curious about that as well, but I was also wondering how the trads and neo cons were going to spin Benedict's statement so that it appears Benedict did not make any change in the Church's approach to condoms and AIDS.  How would they spin this to make sure that heterosexual couples would continue to be banned from using them in their marriages in order to prop up the teaching on birth control.  My supposition would be that they would key in on the English translation using the words 'male prostitute' and ignore the Vatican's own translation which used the feminine attribution for prostitute.  It turns out they most certainly have.

In a piece for Catholic Education Resource Center written by Janet Smith, who holds the Fr. McGivney Chair of Life Ethics at Sacred Heart Major Seminary in Detroit, she makes the same point I had, when I originally understood that the Pope was specifically speaking about homosexual sex acts which are by definition non procreative. Benedict's observations would not apply to HIV marriages, which means there would be no change and the totally inhumane ban would still be in effect--unless you happen to be a gay male, and they don't count any way except as a useful political football for a certain mindset.  Here's some extracts which give a very good sense of the trad/neo con take.

What is Pope Benedict saying?
We must note that the example that Pope Benedict gives for the use of a condom is a male prostitute; thus, it is reasonable to assume that he is referring to a male prostitute engaged in homosexual acts. The Holy Father is simply observing that for some homosexual prostitutes the use of a condom may indicate an awakening of a moral sense; an awakening that sexual pleasure is not the highest value, but that we must take care that we harm no one with our choices.  He is not speaking to the morality of the use of a condom, but to something that may be true about the psychological state of those who use them.  If such individuals are using condoms to avoid harming another, they may eventually realize that sexual acts between members of the same sex are inherently harmful since they are not in accord with human nature.  The Holy Father does not in any way think the use of condoms is a part of the solution to reducing the risk of AIDs.  As he explicitly states, the true solution involves "humanizing sexuality." (Prostitutes do not engage in sex for pleasure.  They engage in sex for money. Oh, I almost forgot, homosexuality itself, is a psychological problem for Ms Smith, so of course, Benedict must have been all about the 'psychology' not the morality.)

Anyone having sex that threatens to transmit HIV needs to grow in moral discernment. This is why Benedict focused on a "first step" in moral growth. The Church is always going to be focused on moving people away from immoral acts towards love of Jesus, virtue, and holiness. We can say that the Holy Father clearly did not want to make a point about condoms, but wants to talk about growth in a moral sense, which should be a growth towards Jesus. (No, 'we' can't say that.  It is just as reasonable to say that Benedict specifically used condoms as a legitimate example of one way to move towards a more evolved moral understanding about sexuality or that he wants to give light to the fact there are legitimate cases where mitigating harm to another is the true 'pro life' stance.)

So is the Holy Father saying it is morally good for male prostitutes to use condoms? The Holy Father is not articulating a teaching of the Church about whether or not the use of a condom reduces the amount of evil in a homosexual sexual act that threatens to transmit HIV.......(He can't articulate such a teaching. Mortal sin means eternal hell. To teach there are gradations concerning mortal sin would be pretty close to heresy.)

........But the Holy Father is not making a point about whether the use of a condom is contraceptive or even whether it reduces the evil of a homosexual sexual act; again, he is speaking about the psychological state of some who might use condoms.  The intention behind the use of the condom (the desire not to harm another) may indicate some growth in a sense of moral responsibility. (Heterosexuals are not allowed the freedom to make such a choice in a monogamous marriage. They are forced by Humanae Vitae to abstain or harm each other.  Actually abstinence is usually harmful to a marriage so I guess it's a lose/lose situation all the way around for married heterosexuals.)

Ms. Smith went quite a bit beyond me in her interpretation of Benedict's statement when I too thought the operative words were 'male prostitute'.  Fr. Lombardi's clarification takes things beyond male prostitute. He could easily have clarified Benedict's words in exactly the same way Smith has in her piece.  He did not. Lombardi talks about HIV and condoms without parsing it down to gay sex for money, or sex for money period. In fact, Lombardi never mentions gay prostitutes, gay sex, or prostitutes.  He speaks generically across the board.  He articulates the position of calculating the harm of HIV infection into the birth control equation when it comes to condoms.  We will know precisely what Benedict intended when Caritas International gets confirmation from the Vatican on condom distribution.

What I am most curious about is the semantics issue.  Why in the English speaking world was Benedict's statement translated as gay prostitute, the German translation as prostitute in the male gendered sense, but the Italian translation from L'Osservatore Romano used the feminine form of prostitute.  I find this most curious because depending on one's Catholic world view there is a definition for everyone.  In my own case, I totally prefer Lombardi's explanation which transcends all of these semantics and gets to the heart of the issue which is harm reduction, spiritual and moral development, and the nascent stages of a sexual morality in terms of relationships.  He will undoubtedly be re spun by the Chaput News Agency.

There's another whole train of comments I've found to both mystifying and anger generating, and that's the train of thought espoused by commentators like Austen Ivereigh and Michael Sean Winters.  They maintain that this moral thinking about condoms has been underground and well defined by theologians and bishops, and has been a valid Catholic approach to the subject of HIV and condoms for quite some time. Nice of them to keep it all to themselves while women, their children, and their husbands have been dieing in the millions because the 'not underground' teaching has precipitated many of these needless deaths--and not only because of the 'official' teaching but because Catholic charities like Caritas have been forced to keep their condoms in their warehouses.

To conclude this, I have found this weekend highly instructive in how various 'wings' of the Catholic church have chosen to approach Benedict's statement on condoms.  I have a Mormon friend who has found this all mind boggling.  She can not get her head around the fact that Catholics seem to be obsessed with semantic and logic minutiae. She now has a better understanding of the old saying "the devil is in the details'.  I told her about the line from the movie A Man For All Seasons which sort of sums up this silly attitude.  St. Thomas More tells his daughter that God made man to serve Him in the tangle of his mind.  Benedict needs to untangle all of this with a clear statement to Caritas that it's time to provide condoms to those who want them--well past time.

Update:  Sandro Magister has this additional quote about Humanae Vitae from Benedict on his blog today.

The perspectives of "Humanae Vitae" remain valid, but it is another thing to find humanly accessible paths. I believe that there will always be minorities that are deeply persuaded of the correctness of those perspectives and that, in living them, will be so fully rewarded that they will become for others a fascinating model to follow. We are sinners. But we should not take this fact as evidence against the truth, when that high moral standard is not met. We should seek to do all the good possible, and sustain and support one another. To express all of this from the pastoral, theological, and conceptual point of view as well in the context of current sexology and anthropological research is a great task to which we must be more and better dedicated.

The 'perspecive' of Humanae Vitae? Find humanly accessible paths?  Always be minorities that are deeply persuaded of the correctness of these perspectives?  Holy cow, has Benedict been infected with common sense, here to for commonly described as 'relativism.  Is he saying there is more to the Body of Christ than the 'minority' who follow every jot and tittle?  I am at a loss for words, but with the few I can still muster, I really encourage my readership to parse Sandro Magister's link because it contains really fascinating excerpts
from Benedict on a number of other issues.
Posted by colkoch at 9:27 AM