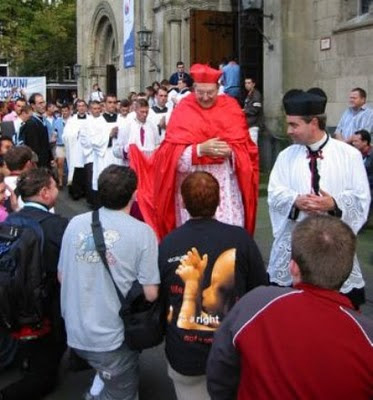 "He's a quintessential Australian," a friend of George Pell's once observed. "He loves to shock."Over the years, the Sydney cardinal's launched his unique, prolific brand of broadside on environmentalists, Islam, and the ecclesial and political Left... to name but a few. Yet soon, barring the unforeseen, a new target -- for "Big George," the biggest one yet -- appears set to present itself....The Global Bench, all 5,000 members of it.

Sure, the formal word might've been absent from this morning's dispatches. Lest anyone wasn't banking it before, however, you can bank it now -- early today, the leading Italian "court scribe," Il Giornale's Andrea Tornielli, blogged the following, here translated from the original:

In the last few days Benedict XVI again received in audience Cardinal George Pell, archbishop of Sydney, making official his appointment as Prefect of the Congregation for Bishops. Pell subsequently had a long conversation with his predecessor, Cardinal Giovanni Battista Re. The announcement of the move will be given over the coming weeks, but before the first of summer.

Pell would be installed at the helm of the "bishop factory" for its return to full rhythm of its activity after the summer holidays. With the arrival of an Australian in the lead post of the key dicastery of the Roman Curia, that which deals which choosing bishops, Benedict XVI has completed one of the most important choices of his pontificate, one destined to shape the life of the global church for the next twenty years. It's true, in fact, that Pell isn't very young -- he'll be 70 years old in June 2011, and so has ahead of him no more than seven years -- but it's likewise true that the episcopal appointments that pass his sign-off before being placed before the pontiff will impact the life of the church for at least two decades. Papa Ratzinger yet again chooses from among the non-Italians for a key post of Curial governance, and from among the non-Italians who have no experience in the Curia (in the last 35 years, the Congregation for Bishops alternated between Italian and non-Italian heads -- from Baggio to Moreira Neves, from Gantin to Re -- but all had Curial experience). A choice certainly destined to renew and internationalize the Curia, and likewise to reinforce the hand of the Secretariat of State.

If I had any doubts about whether the abuse crisis has impacted Benedict's reform of the reform agenda, I don't anymore. He is bound and determined to sail the Catholic Barque on his own personal (Opus Dei) theological course, and it doesn't matter if that course ends in it's sinking. In all likely hood he won't be around to go down with his barque.

Pell is up to his ears in Opus Dei and most other of Opus Dei's ancillary groups. Pell's impact on the Church in Australia has been like a bull and has left the Australian Church a trashed china shop. Attendance at Mass is less than 15% of Australia's Catholic population. The Church keeps on running in Australia because it is heavily subsidized by the government. It's revenue hardly reflects actual participation. This state of affiars, which is not unique to Australia, is one of the primary revenue sources the Vatican counts on to keep itself afloat as Catholics in developed countries leave the pews in record numbers. These government generated revenue sources are the wind which propels the Vatican barque. It's not the collection plate.

Pell was also the chairman of the Vox Clara commission which was responsible for the translation of the Mass which will soon be foisted on Catholic laity in English speaking countries. When asked in a recent interview if this translation was shoved down people's throat, Pell opined that it was passed by all English speaking national bishop synods, and was not a top down decision. This exemplifies Pell's notions of collegiality. Collegiality does not extend to the laity--unless those laity are uber conservative supporters of ecclesiastical and papal authority. He has demonstrated a perfect willingness to act on complaints of the "Temple police" because in Pell's mind laity make fine spies but that's the extent of lay input as far as the Church goes. In true Opus Dei fashion laity are most useful agitating for social engineering on conservative lines and making sure the government tax trough stays flowing to Church coffers. Those large donations from wealthy conservatives are nice, as are their insider stock trading secrets.

Any body who seriously thought Benedict cared about restoring church credibility to any other laity besides those who belong to Opus Dei, the Legionaires, the Neo Cats, or Communion and Liberation can now rest assured he doesn't. His agenda is now and always has been the promotion of theological fascism. He is interested in Catholic souls only if he can control Catholic minds. Pell will see to it that no bishop is given a mitre whose thinking isn't in line with Vatican control.

This may be the one decision Benedict will make which truly has the potential of provoking a schism. Opus Dei used to be described as a 'parallel Church'. Benedict is purposely turning it and it's clones into the Church. He is the one in schism.