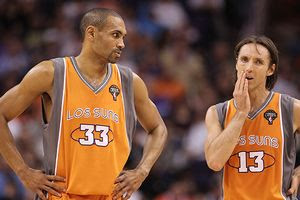 The Phoenix Suns are making one uniform statement, and a Catholic Hispanic group is opting for another uniform statement---and getting a great deal of Vatican support for their uniformity. In the first of two articles the formation of the Hispanic Catholic leadership group CALL is described. The second deals with it's open armed acceptance by the Vatican.

Catholic Latino leaders launch CALL in response to need for dialogue with bishops
Denver, Colo., Sep 10, 2007 / 03:18 pm (CNA).-
More that 30 Catholic Latino businessmen and professionals from around the country gathered this past weekend at the Archdiocese of Denver to announce the creation of the Catholic Association of Latino Leaders (CALL.) The group was created after some of the US bishops identified the need for ongoing dialogue with Catholic Latino leaders.
Members of the new association gathered at Saint Malo retreat house at the invitation of Most Reverend José Gomez, Archbishop of San Antonio and with Archbishop Charles Chaput, OFM Cap, as their host.
The participants at the 3rd Catholic Latino Leadership Conference explained that the creation of CALL came as a response to some of the bishops asking for a dialogue with Catholic laity who are in the business and professional sectors. (I think I can name two of those bishops. I guess that equals 'some bishops'.
“Driven by our love for the Church and her mission, within the context of our culture, and in communion with the bishops,” the members of CALL committed themselves to being a national voice for Catholic, Latino business and professional leaders in the United States.
During the Conference, Archbishop Chaput spoke about the way that the American Catholic population is changing, saying, “the American landscape has changed.” “Demography is destiny. In the future, Hispanic Catholics will have a very serious influence on the direction of American society. And this is why I believe it’s time for Hispanics in general, and Hispanic leadership in particular, to take up the role that they deserve, and which they’ve earned, in the mission of the Church.” (This is in the mission of the Opus Dei Church.)
The mission of the new organization will be to impact the national dialogue and contribute to the mission of the Church by identifying initiatives important to the building up of the Catholic community and if appropriate, support them in accordance with the bishops. (Their mission is to support OD group think and take advantage of the available business opportunities. This was not a meeting for poor Hispanics or illegal immigrants.)
CALL will also support the implementation of the five priorities of the U.S. Conference of Catholic Bishop’s Pastoral Plan for the next decade; namely, to restore and promote the sanctity of marriage and family; to educate and form people in the faith and the faithful celebration of the sacraments; to promote priestly and religious vocations; to promote the life and dignity of the human person; and to promote cultural diversity and Hispanic ministry. (If anyone wondered why the USCCB felt they could threaten Hispanic immigration reform over gay immigration, you now have the answer. Gays do not qualify as cultural diversity in the OD church.)
Archbishop Gomez said during his remarks that “we might be tempted on some level to feel that somehow we must prove that we are real Americans. We might feel subtle pressures to blend in, to assimilate, to downplay our heritage and our distinctive identities as Catholics and Hispanics.”
“I believe that in God’s plan –he added-, the new Hispanic presence is for the purpose of our country’s spiritual renewal. To restore the promise of America’s youth. The noble ideals of our country’s beginnings. In this renewed encounter with Hispanic faith and culture, I believe God wants America to rediscover values it has lost sight of—the importance of religion, family, friendship, community, and the culture of life.” (In this view, restoring the noble ideas of America's beginning means taking away the constitutional rights from targeted groups, or establishing a faux Catholic Hispanic identity on the backs of others. This is neither the Christian Ideal nor the American Ideal, but it closely parallels the largest group of Hispanic Evangelicals led by Rev. Samuel Rodriquez, who is the self anointed leader of the National Hispanic Christian Leadership Conference.)
“So I urge you friends: Do not forget where you came from or who you are! Do not forget Jesus. Do not forget the Church,” Archbishop Gomez concluded.

The above article is from September 2007. Two and one half years late CALL has achieved a remarkable level of success. So much so in fact, they are the first lay group ever to have this kind of Vatican access:

US Catholic Latino leaders meet with Vatican officials, discuss ‘Hispanic reality’
Vatican City, May 5, 2010 / 04:12 am (CNA/EWTN News).-
During the week after Easter, members of the Catholic Association of Latino Leaders (CALL) held a series of meetings at the Vatican with various officials of the Roman Curia. The effort was intended to start a discussion about Hispanic Catholic influence in the United States and in the U.S. Church.
Reporting on the event in a May 1 newsletter, CALL described itself as the only national lay Catholic Hispanic leadership organization in the country. The organization was founded by Archbishop José Gomez, who was recently appointed co-adjutor archbishop of the Archdiocese of Los Angeles.
CALL explained that its “Vatican Forum” involved meetings with seven pontifical councils. Its 24-member delegation met with representatives from the Secretariat of State and from the Pontifical Councils for the Laity, for Justice and Peace, for Immigration and for Communications. They also met with members of the Pontifical Commission for Latin America, the Bishops' Synod and the Congregation of Bishops.
Mario Paredes, CALL chairman, said the purpose of the meetings was “to bring the Hispanic reality to the table in Rome.”
According to the group, there are an estimated 47 million Hispanics in the U.S. and another 12 million who are undocumented. Thirty-five percent of Catholics in the U.S. are of Latino heritage.
Board members Dr. Christine Johnson and Tom Espinoza served as spokespersons for the delegation. During their meetings Johnson presented statistics and demographic presentations about the growing Latino influence in the U.S., its economy, and the Catholic Church.
Espinoza discussed how the Church should translate that data into a relevant pastoral response including Church leadership appointments. (In this 2008 CNA article, Archbishop Chaput lays out the Irish strategy in a speech to the CALL convention. Sort of a take back your Church and country from the Irish strategy---beat them at their own game. I didn't know games and political strategies were part of Jesus's Way. I guess Chaput want's me to believe they are though.)
The delegation also met with the U.S. Ambassador to the Holy See, Dr. Miguel Diaz. He shared his perspectives as a theologian and as a U.S. government representative. After the meeting, CALL hosted a special dinner in honor of the Ambassador, with invited members of the Roman Curia in attendance.
During their visit the delegation stayed at the Cardinals’ House of the Conclave, known as Domus Sanctae Marthae (St. Martha’s House), which is immediately adjacent to St. Peter’s Basilica.
CALL said its message for the meetings included an affirmation of support for the Church and her bishops. The delegation did not meet with Pope Benedict XVI, but it delivered a personal message to him of gratitude and support.
“The visit to the Worldwide Headquarters of the Catholic Church has been a rewarding spiritual experience,” Paredes commented. “With our high level of contact and dialogues, we have been able to learn first-hand the work that the Church is doing around the world, and specifically, in the United States.” (Which Church? The universal Catholic one, or the global OD one?)
Vatican officials reportedly reacted to the meetings by saying they were encouraged and impressed that a lay group would travel to Rome to deliver their message on behalf of the Catholic Church in the U.S. They complimented the group for “taking ownership” of the life of the Church, in service to the realization that the laity are the Church.
Officials also encouraged members of the CALL delegation to contact their respective bishops to express their support and fidelity.
CALL claimed the meetings were “historic” on several levels, noting that the leadership of important Vatican dicasteries traditionally only meets with bishops.
Archbishop Gomez, who serves as CALL’s episcopal moderator, had planned to join the group at the Vatican, but the event conflicted with the announcement of his appointment to Los Angeles.

**********************************************
It's so disheartening to me to understand that our radically conservative Opus Dei influenced bishops are willing to use a divide and conquer strategy with in the Hispanic community itself. If anyone wondered why the Legion was allowed to continue, and that that continuance was based on it's contacts with money--especially Hispanic money--the formation of CALL should serve as evidence. CALL is not a lay association of illegal immigrants, single parent families, or poor Hispanics. I'm sure these business and professional leaders made many fruitful contacts in Rome, and I'm also sure they received marching orders concerning gay marriage and abortion rights.
The Vatican is sending all kinds of signals that under this Pope there will be no dialogue with progressive Catholics of any nationality or culture. Benedict will only do so much filth cleaning. He will throw some Armor All at the most egregious surface spots, but leave the core of the filth untouched. Kind of like waxing over a completely rusted out, burned out, old car. Don't be surprised if the delegate to the Legion is a member or associate of Opus Dei or a Legionaire raised to the episcopacy.
I really hope and pray that CALL isn't willing to let the USCCB undercut immigration reform for millions of Hispanics because the legislation might make room for 30,000 or so gay families, some of whom are Hispanic. I think however, that this is exactly one reason this group has enjoyed such success with the Vatican in such a short space of time.
On a more positive Cinco De Mayo note, the Phoenix Suns NBA team will be making a uniform statement of solidarity with the Arizona Hispanic population during tonight's NBA play off game with the San Antonio Spurs. The Spurs too, would have made the same uniform statement, but they couldn't get the logo work done in time.