When Two Deaths Are Morally Better Than One 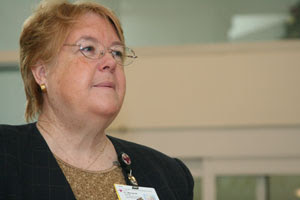 My friends,
It has not taken long for news of the excommunication of an Irish nun in the misbegotten state of Arizona to reach around the world, even to the far-off mission in which I am blessed to serve.
You can read the whole story here, but in brief: Sister Margaret McBride, a longtime and faithful worker at St. Joseph's Hospital in Phoenix with some pioneering accomplishments helping the poor to her credit, has been excommunicated by local Bishop Thomas Olmsted. Sister Margaret was a member of the hospital's ethics committee, which faced a terrible decision. A patient with an 11-week-old fetus was dying in the hospital from a rare heart condition, in which the strains of pregnancy can tip the balance between life and death. (Because the mother was dying, the fetus was also dying. A major technicality that seems to have escaped Olmstead, but not the medical community.)
Founded in the then-"Wild West" by the Irish Sisters of Mercy, steeped in Catholic tradition and famous for its outreach programs to the impoverished and especially the large undocumented immigrant community, it was a wrenching choice. Doctors and medical experts were unanimous in their belief the mother would die unless her pregnancy was aborted.
Sister Margaret agreed with the hospital committee, and the abortion was performed.
Bishop Olmsted reacted even faster than the medical staff, which was facing an emergency life-and-death decision. Sister Margaret McBride is now Margaret McBride.
"An unborn child is not a disease. While medical professionals should certainly try to save a pregnant mother's life, the means by which they do it can never be by directly killing her unborn child. The end does not justify the means," the bishop declared. (Except the fetus dies either way, don't you get this? Is the mother then to forfeit her life for nothing?)
Olmsted added that if a Catholic "formally cooperates" in an abortion, he or she is automatically excommunicated.
"The Catholic Church will continue to defend life and proclaim the evil of abortion without compromise, and must act to correct even her own members if they fail in this duty," the bishop said. (Without sanity or compassion as well.)
Although I cannot disagree with the bishop's theology and support the Church's protection of the sacredness of all life, I suspect he needs "medical" treatment himself: a strong injection of reality.
Most important is a simple reality: If the mother of an 11-week-old fetus dies, the fetus will also die. It is too soon in life for the child to survive outside the womb no matter what the hospital might try. That means two deaths. Is there really a morally defensible reason for two innocents to die when one can live? It's a hackneyed phrase, but what would Jesus have done? (No, there is no justifiable moral defense for allowing two innocents to die when one can be saved. To maintain otherwise makes a mockery of any pro life stand because then the stance is not pro life, it is murderous propaganda.)
Over the years, the Church's solid wall guarding all life has allowed an exception or two. For example, while euthanasia and so-called "mercy killing" is condemned, the Church has made it clear that there is no need to use "extraordinary means" to preserve life when, in the best judgment of all and with prayerful reflection, there is no real hope for the patient's recovery. Of course, this does not mean a call to the murderous "Doctor" Kevorkian, but usually the withdrawal of life-support equipment that is filling the patient's lungs with air and his heart with blood in a way that is more mechanical than medical.
In this matter, the Church has taken good counsel from the world of science to make a just and merciful clarification in doctrine. But while there has been considerable debate within the Church about the kind of dilemma faced by St. Joseph's Hospital, no "exceptions to the rule" on abortion have been forthcoming. (If this particular situation pertained to men, you can bet there would be pastoral exceptions. See pedophile abuse scandal.)
It is long past the time to reconsider this. If all life deserves our protection and is sacred to our Creator, then a mother's life is just as worthy as her child's. How has this become lost in the battle over abortion? (My guess is a woman loses her equal innocence the minute she engages in sex and stops being a 'Holy Virgin'.)
Bishop Olmsted is an intelligent and compassionate man. Like most in the religious community, he has spoken out forcefully against Arizona's immoral new "law" that is nothing more than an attack on the humanity of those who have sought a home and a life in America. While all agree that immigration reform is badly needed, human attack dogs and "camps" are not part of the answer. "Illegal" or not, a sick immigrant is welcome at St. Joseph's Hospital, even if the Diocese must foot the entire bill. God's Mandate to love all as one means charity for all.
It also means forgiveness, in this case, for Margaret McBride. She has spent a long career doing God's Own Work on earth, and even if you believe that she has erred in this heartbreaking moment, I believe her Catholic Ministry should continue.
In a world in which many, if not most people walk past the poor and suffering without a second's thought, Margaret McBride heard God's Call to Love and made answering it her life's work. I pray that Bishop Olmsted will deeply reflect on all Margaret McBride has done in the Name of God and the Church, and reconsider his decision so that the poor may continue to feel the love of Sister Margaret McBride.

Situations like this make me very very angry. It is precisely in this kind of case that pro life theology becomes murderous propaganda at the service of someone other than God.
Sister Margaret McBride may be excommunicated in the eyes of Bishop Olmstead. She is not in my eyes. Her decision and that of the hospital was the pro life decision. To state other wise is to prove beyond a shadow of a doubt that one is nothing more that an irrational ideologue perfectly willing to execute mothers for the sake of the ideology. In my book withholding life saving treatment for no reason most certainly qualifies as a form of active execution. In this case not treating this woman would have been murder and undoubtedly left the hospital and it's individual medical personnel open to all kinds of malpractice liability issues. I wonder if Olmstead would have opened his coffers to pay off those law suits. Somehow I doubt it.