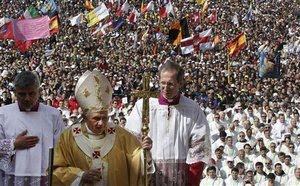 Seems to be a conspicuous lack of women anywhere near Benedict. I often wonder how men would feel if everything were reversed. Would it bother them that in their professed religious truth, no men would appear in this photo, at least none dressed in clerical clothing---and that these visuals would be repeated endlessly.

In a strong missionary appeal coupled with a call for dialogue, Pope Benedict XVI today urged his flock to resist the lure of a sort of “ghetto Catholicism,” closed in on itself.
“We have to overcome the temptation to limit ourselves to what we already have, or think we have, that’s securely ours,” the pope said.
"That would be a slow death."
Benedict XVI made those comments during an open-air Mass in Porto, an urban area of roughly two million in northern Portugal.
Benedict seemed almost impatient to get things moving, saying that Christ’s comforting words about being with the church to the end of time “do not excuse us from going out to meet others.”
“How much time has been lost, how much work has been delayed, because of carelessness on this point!” he said.
As he has throughout his four-day trip, Benedict stressed the need for dialogue with those outside the Catholic fold.
“Today the church is called to face new challenges, and is ready to dialogue with different religions and cultures, seeking to construct the peaceful co-existence of peoples with every person of good will.” (Co-existence is a far cry from some of what Benedict has written in the past where his 'dialogue' was about conversion to the true faith and the deficiencies of other religions in terms of TRUTH.)
Benedict also suggested that the style of missionary effort called for can be expressed in the following phrase: “We impose nothing, but we always propose.” (Does this mean calling off all the political crusades? Or does proposing include political agitation?)
Offering Christ as the key to human life, the pope argued, represents Christianity’s primary contribution to the great social challenges of the 21st century. (Maybe we should start pointing to teachings of Christ as the key to the expansion of human consciousness and offer that this the goal of human life and Jesus's call to love.)
“Facing the enormous problems of development of peoples that almost drives us to despair and surrender,” he said, Christians know that the only firm basis upon which to build a better future is the promise of Christ. (Except Jesus said to look within and spoke frequently of the need for a conversion to a love based culture, rejecting a power based culture.)
Despite chilly and rainy weather this morning, an estimated 200,000 people flocked to Pope Benedict’s Mass in the Grand Piazza of Avenida dos Aliados of Porto. The tightly-packed crowd filled the square and flowed down adjacent streets. Assistance was offered by young volunteers clad in orange t-shirts reading “Papa Team.”........
* * *If one were to hand out a prize for the most visible Catholic movement throughout Pope Benedict’s four-day trip to Portugal, it would almost certainly go to the Neocatechumenal Way. Founded in Madrid in 1964 by Spanish laypersons Kiko Arguello and Carmen Hernandez, the movement claims some 1 million followers around the world.
The Neocatechumenate has been embraced by many church leaders around the world for its ability to stir passion among converts to the faith, especially among the young, and for its effective pastoral work with Latino/a Catholics. It has also been a lightning rod, however, for its distinctive liturgical practices, and for the movement’s allegedly divisive impact on some of the parishes and dioceses where it’s present. (Three frequent charges against these lay movements, especially those founded by Spaniards or heavily influenced by a particular Spanish mindset, is their divisive impact in parishes, their penchant to present themselves as a sort of elite uber Catholic, and their cult like recruiting and ritual practices.)
Neocatechumenate banners have dotted the crowds at Benedict’s Masses, and it’s been hard to move around the margins of papal events without encountering small groups of Neocatechumenate members singing and celebrating.
That’s not because the Neocatechumenate is unusually prominent in Portugal, but rather because the movement is staging a massive “European Youth Vocational Meeting” in Fatima today, piggy-backing on the papal trip to attract Catholic youth from across the continent. The rally is being held in the piazza facing the main shrine in Fatima, the same space where Benedict XVI yesterday celebrated an open-air Mass. (C'mon John, Neo Cats always bus in loads of followers to any major Church gathering in Europe. They are a Tea Party organisers dream group.)
Though Neocatechumenate members were not on hand yesterday evening to hear Benedict XVI address the bishops of Portugal, his message would be of keen interest to them and to other “new movements” in the church.
In his address, the pope praised the flowering of new lay movements and religious orders, which he said have grown up precisely in a moment in which many refer to a “winter of the church.”
At the same time, Benedict insisted that new movements and communities have to accept the “common faith of the church,” work in collaboration with other Catholic groups and institutions, and accept the authority of their pastors and bishops.

I wonder if this is another series of speeches in which Benedict is attempting to herd both ends into the middle. I'm having trouble trying to digest how he can do this when he has spent the past thirty years supporting the traditionalist end against the middle and silencing the progressive end.
In that process he and John Paul enabled the creation and fostered the spread of the excessive zeal and 'ghetto mentality' of the new groups he is now having to reign in. The Legion is just the most obvious example of one of these new groups that was allowed, if not fostered, to get out of control for the sake of spreading the Reform of the Reform. Now Benedict is in the unenviable position of attempting to reform the reform of the reformers. The trouble is all these new lay apostolates are in love with their status as Papal favorites, the 'purity' of their message, and their specific version of Catholic identity. The rest of us are at best 'wannabe's', Episcopalians lacking the courage to convert, or at worst, heretics. Kind of hard to dialogue when the other parties are convinced they hold all the high ground and have been copiously rewarded for their view for three decades.
There is one other place where Benedict is going to run into a brick wall and it's one that effects an enormous number of Catholic doctrines. When he states: "We know Jesus is the one we are all awaiting." he seems to be referencing a literal second coming in which Jesus appears and rights all wrongs. Catholics then place their hope for mankind in this literal second coming.
I happen to think Jesus literally meant it when He said the Kingdom is found with in you. It is in the process of delving the depths of ourselves for the truths to be found there that we transcend our notions of ego and our ideas about consciousness and three dimensional reality. We find Jesus there, in that timeless and space less reality with in us, pushing us to be all we can be, to go where few humans have gone before. All spiritual systems teach this to some degree or another. As long as Catholicism as a religion, is dependent on external expressions of relationship to the divinity, it will continue to miss the true spiritual message. Jesus is not found exclusively in the Temple, He is found powerfully and truthfully inside each and everyone of us. There in lies the true hope for mankind.