And Now For Some Honesty And Coherence 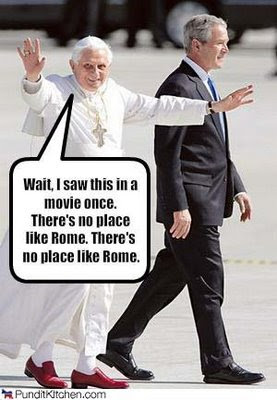 Ah yes, there's no place like Rome. Love the Ruby Red slippers and the traveling companion--I think I know which one he is. It's not the Cowardly Lion or the Tin Man. This may be one time Pope Benedict wishes clicking his heels took him someplace other than Rome.

The following comment from the Vicar of Rome is in reference to an article in Silvio Berlusconi's Panorama Magazine. This link takes you to BBC coverage of the Italian article. The article is an undercover expose of three gay 'party boy' priests cavorting at night in Rome's gay bar culture and then praying with pious old women during the day. It's from Bloomberg

The Vicar of Rome today called on homosexual clergymen in the Catholic Church to “come out” and leave the priesthood.

The Vicar of Rome, one of the most important positions in the Vatican, was responding to a report today in Panorama Magazine that said Catholic priests were conducting a double life, citing secret video footage.

“No one is forcing them to stay in the priesthood to exploit the benefits,” the Diocese of Rome said in a statement posted on its Web Site. “If they are coherent, they should come out into the open.”

I doubt the Vicar of Rome is serious about gay priests coming out in the open. Well, he might be, but I seriously doubt the same applies to the Vatican. First, the numbers would be an embarrassment to a Church bent on 'praying the gay away'. If all gay priests got honest and left that evidence might not lend much credence to movements like Courage. Who prays more or engages in more ceremonial ritual than priests? If the prayer thing didn't work for the priesthood, why would it work for any gay lay person? I suppose one could argue that if all those gay priests were in Courage they wouldn't be cavorting at night. Moving right along......

Secondly, the prime strategy used by the Vatican to explain away the clergy abuse problem is to blame it all on gay priests. Based on the changes in seminary admission standards, bishops would more or less find themselves in the position of having to remove all their gay priests from active ministry. This would result in a significant reduction in available priests, especially in the Anglo world. Some estimates put the percentage of gay priests in the 50% range which would be a really significant reduction. In some dioceses unsubstantiated rumor would have it very close to lethal.

But the real reason I can't take this seriously is that all those suddenly thrown out honest gay priests would have all kinds of information about all those bishops, Cardinals, and other Catholic officials that their suddenly found honesty might compel them to reveal. For some reason I can think of one media empire led by a high ranking Italian politician who might jump at the chance for that kind of expose--because it would be a service to the Church, not because it would generate lots of income, and never, never, never because paybacks are a bitch.

I'll be keeping an eye on this story. It has some real potential in it. Which might be what the expose was all about. Silvio Berlusconi might just be throwing a few seeds out to see which one's sprout.