Spiritual Wars, Culture Wars, And Younger Generations Who Are Moving Beyond This World View 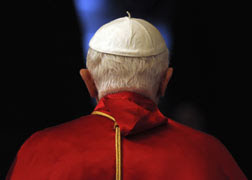 The policy makers can turn their back on progress, but the truth is the younger generations won't follow, and maybe neural development says they never will.

Betty Clermont has a must read post over on Open Tabernacle about the Tea Party Church based on John Allen's current NCR post dealing with recent Vatican moves. Actually John Allen's post is a must read as well. It's one of the most honest posts I think I've read from John in quite awhile. This post is John Allen at his analytical best. This particular observation has stayed with me all week end:
"Collectively, I think these events both symbolize and advance the collapse of Catholicism as a culture-shaping majority in the West. When the dust settles, policy-makers in the church, particularly in the Vatican, will be ever more committed to what social theorists call “identity politics,” a traditional defense mechanism relied upon by minorities when facing what they perceive as a hostile cultural majority."
Betty's post deals in more detail with the markers that John listed which describe what he calls the "defense mechanism" relied on my minorities when facing a hostile culture. They are the same kinds of markers which define the Tea Party.
What interests me though is that in both the Church's case and the Tea Party movement it's been the powerful policy makers who have put the time, money, and organization into defining the markers and building the momentum of these respective movements. They are both very top down movements, one circling around fears about spiritual wars and personal salvation, and the other circling around fears about culture wars and cultural salvation. They are most certainly complimentary movements each defining their own sphere of influence, and both are based in atavistic existential questions. Who am I, where do I fit in the universe, why do I feel so alone? Rather than really addressing these questions, both movements exacerbate them by giving their adherents an externally defined identity. They answer highly personal questions by giving an artificially derived group identity.
It works because this is exactly how we are enculturated as children. We accept our notion of who we are from observing our family and how it identifies itself. We then identify with those external definitions because our very survival depends on doing so. The really important part of the maturation process begins when our brains have developed higher level processes and we start questioning what had previously been unquestionable. We begin to notice differences as easily as we identify similarities. At about this same time we also begin to make judgments, and the criteria for those judgments usually come from the family construct. It's not surprising then that both Vatican Catholic policy-makers and the Tea Party equivalent stress the "traditional family' and strongly desire to control it's make up and thinking.
One of the reasons I think this is basically falling on it's face in the West is because the culture no longer needs young people to marry early and economically does not support early marriage. The longer marriage and child rearing are postponed, the more time the young person has to develop an identity independent of their family structure and culture. I don't know that humanity has ever experienced this particular phenomenon where young adults are free to develop independently in quite this manner for this length of time. It may be nature's way of providing a development period for the part of our brains which develop last, between the ages of fifteen to twenty five, known as the secondary developmental stage of the prefrontal cortex.
This part of the brain biologically develops in all of us, but that doesn't mean it lights up in boundless activity on a PET scan. In point of fact, we don't really know what this last stage of development is for. We do know that based on other developmental stages, being the last in line, it should generate another huge jump in world view and abilities, while incorporating and controlling all neural stages and experiences that have come before. At least it should if it was given the freedom to do so.
Past cultural influences did not facilitate this freedom. Those influences predisposed teenagers to take on adult responsibilities before this neural development was finished, perhaps inadvertently shutting down the expression of an amazing set of human abilities and a totally new world view. I feel compelled to point out that Jesus did not take on the customary duties of a Jewish male which would have had Him married at eighteen or so, and He did develop an entire new world view with some pretty amazing abilities. The prevailing culture, both political and spiritual, did not appreciate His world view because it transcended all their cultural identity markers and conceived of them as a secondary influence. Things haven't changed much, but they might have changed radically for today's younger generations. That should be worth fighting for, not against.